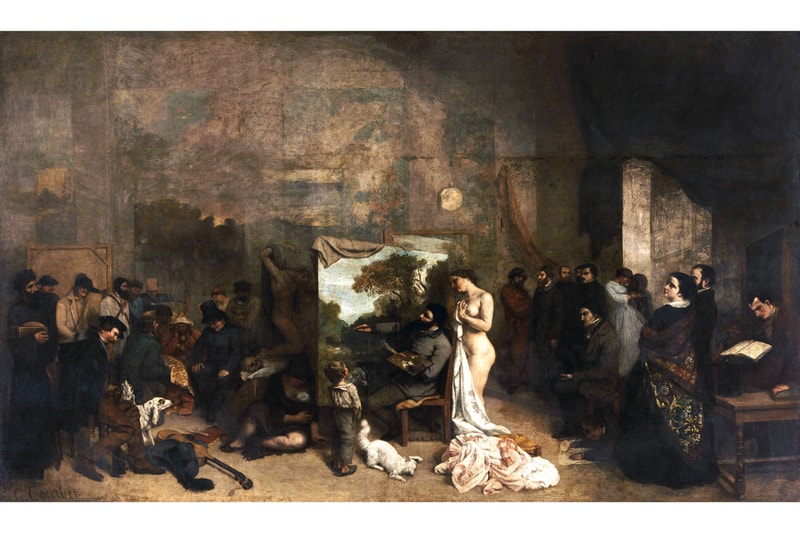 Virgil Abloh’s designs for Louis Vuitton Fall/Winter 2019 Men were manifold. Debuted during Paris Fashion Fashion Week, the presentation featured vivid silhouettes with several pieces paying homage to Michael Jackson and ’80s/’90s graffiti culture. This time around, the multifaceted designer shares a preview of the collection’s inaugural campaign entitled BOYHOOD. Set against a warehouse backdrop, the visual portrays a crowd of diverse models, including Abloh’s close friends such as Syd and Lucien Smith among others, clad in the FW19 garments. As the designer revealed in a recent Instagram post, the group portrait was largely inspired by a painting made by the 19th-century French Realist painter, Gustave Courbet.

The oil on canvas artwork, entitled The Artist’s Studio, a real allegory summing up seven years of my artistic and moral life (1854-55) is perhaps Courbet’s most famous composition. The left section of the painting portrays everyday life in France. In the middle of the work, a self-portrait of Courbet is shown painting a landscape alongside a nude female figure, a young boy, and a white cat. On the right side, a group of affluent Parisians gathers including close friends of Courbet.

The visual references in Courbet’s painting are not unlike the LV creative director’s own artistic direction for BOYHOOD. In the teased campaign, Abloh channels the role of the French artist as he meticulously checks the fit and appearance of a model in the middle of the photograph captured by Mohamed Bourouissa.

View the original painting above and preview the campaign below. Elsewhere, UTA Artist Space will present a group exhibition of works by leading Black artists such as Nick Cave, David Hammons, Arthur Jafa, and more.