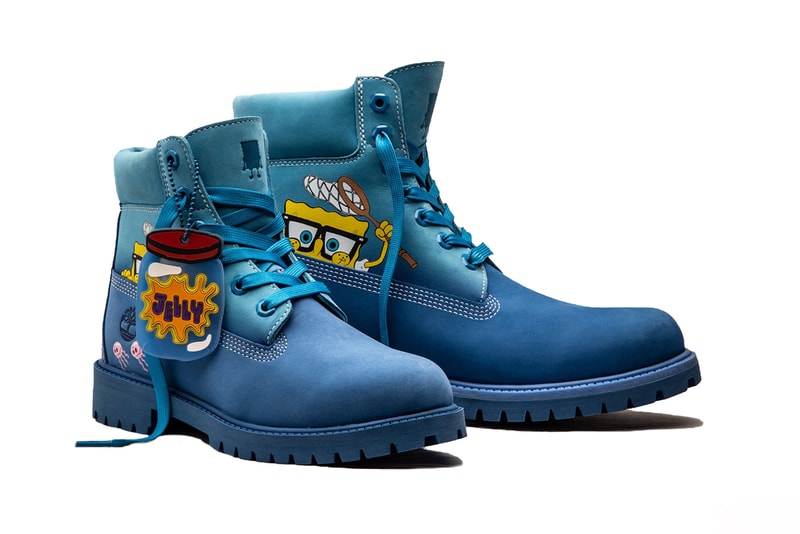 Timberland is the second footwear company to drop a collaboration with SpongeBob SquarePants this month, following the release of the highly anticipated SpongeBob Kyrie 5 and Kyrie Low 2. The SpongeBob x Timberland collection includes two new pairs of Timberland’s 6" Premium Waterproof Boots, both filled with clever design details from the celebrated cartoon series.

The bright blue pair pictures SpongeBob preying on jellyfish, a classic scene from many of the most iconic SpongeBob episodes. With net in hand and glasses on tight, SpongeBob peers over the contrasting white stitching looking down at three jellyfish surrounding Timberland’s debossed logo. A debossed image of SpongeBob replaces the Timberland logo on the tongue. The option of two interchangeable laces allows wearers to keep things tonal with blue or match the jellyfish with a bright pink. A giant jar of jelly keychain replaces the classic removable Timberland branding attached to the shoe.

Depicting another famous SpongeBob scene, the black pair shows Plankton happily running in front of a fresh Krabby Patty printed over Timberland’s logo on the heel. The top two lugs are a contrasting red, while the laces that run through them are a yellow sponge pattern. SpongeBob’s iconic outfit makes an appearance on the dubrae, playing with the scale of the oversized tongue graphic behind it. The tongue is printed over with a graphic of SpongeBob’s face, and a removable rubber SpongeBob keychain completes the shoe.

Both pairs of SpongeBob x Timberland boots have already sold out on Nordstrom’s online store, but Footlocker’s release calendar promises a wider release next month on Friday September 13.

Take a trip down memory lane with our latest #POLL where we reminisce over the best animation franchise sneaker collaborations of all time.