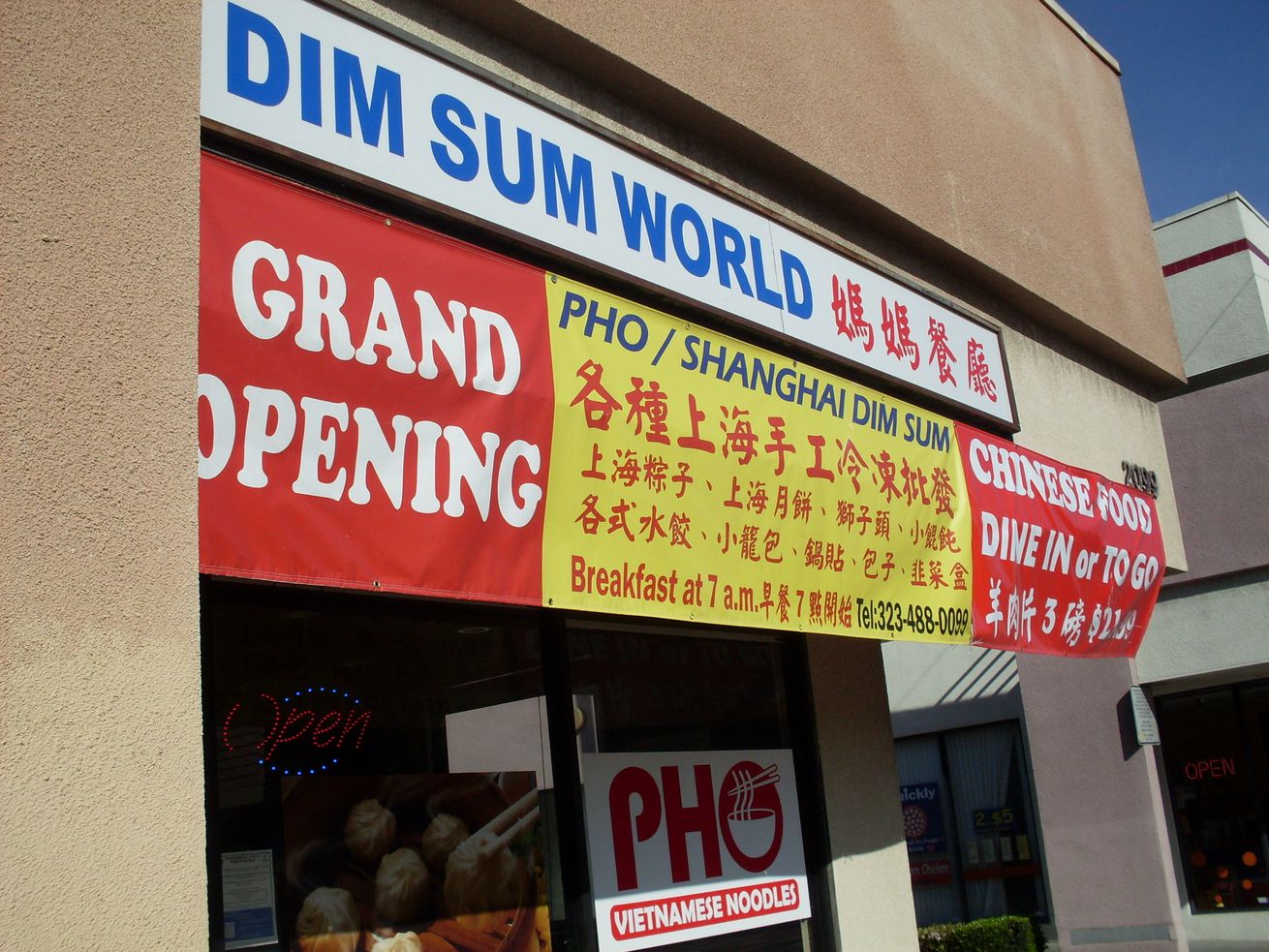 Plus Aghoo’s Kitchen is back, and the ghost of Dean Sin World returns

Welcome to Meanwhile in the SGV, a regular update of San Gabriel Valley updates from Eater’s roving reporter, Jim Thurman. This month, a noted favorite returns, an iconic restaurant shutters, and a switcheroo.

Monterey Park— Stepping into Dim Sum World, one is overcome with a strong sense of déjà vu. From the menu of Shanghainese snack items, crab shell pastries in a familiar plastic display case, and freezer cases of dumplings, it looks — and feels — eerily similar to beloved Dean Sin World, which closed last year. There are differences, like a couple of lamb items, but the similarities are striking. Even the font on the cards and signage are reminiscent of DSW. Dim Sum World replaces Ruihua/Rui Hua, a Vietnamese-Chinese place that served pho, broken rice dishes. Oddly, pho carries over to the new menu, which hopefully should attract students from nearby ELAC, despite a tough parking situation. 2099 S. Atlantic Blvd., Suite A

Monterey Park— An iconic location has closed with the shuttering of Empress Harbor Restaurant. The Cantonese restaurant served cart dim sum, seafood and hosted banquets from around the year 2000. Food writer David Chan reminds us that from the 1980s until then, the space housed Harbor Village Seafood, the most upscale Chinese seafood restaurant in the SGV in its day. 111 N. Atlantic Blvd.

Temple City— After an absence of more than a year, Ahgoo’s Kitchen has relocated. The new place is Ye Loy Ahgoo’s Kitchen, incorporating the signage and name of the iconic Americanized Chinese restaurant that occupied the space for 53 years. From 2013, in a tiny space in El Monte, Ahgoo’s served a huge pan-fried green onion sesame cake and Taiwanese beef noodle soup that gained the notice of food writers and diners alike. It replaces the latest location of acclaimed Taiwanese eatery BeBe Fusion, which opened in June 2018, but never seemed to gain traction at the new location. 9406 Las Tunas Dr.

Arcadia— Tong Tak House has replaced Family Li Seafood (or Li Family if one stood on the other side of the building). Dim sum is served daily from 9:30 a.m. to 4 p.m., with seafood taking over after 5 p.m. The previous eatery, whatever one chooses to call it, opened in November 2016. 1271 S. Baldwin Ave.

Alhambra— Mr. Fish, a Sichuan-style bistro in downtown Alhambra, has closed. Despite garnering some positive coverage from reputable online food writers, the restaurant only lasted about six months. It’s tough out there on Main Street. 39 W. Main St.

Arcadia— After one year, the brilliantly named 100% Fensanity has closed. The replacement is Ikka Sizzling Pot, which features stone (dry) pots. Bone-in chicken is their signature sizzling pot, but bullfrog and a tofu and veggie version are among other options. Signature glass noodles in hot and sour broth are one of three noodle dishes, and surprisingly, Hot-Star brand large fried chicken breast and popcorn chicken are also available. 655 Duarte Rd., Suite C

Monterey Park— There seems no end to skewer joints opening up on Garvey in Monterey Park. The latest being Yi Kebob & Bar. Look for a fairly typical menu of skewered meats, veggies and bread. Several restaurants have passed through the location, including places as novel as Teto Sweets and okonomiyaki specialist Gottsui. The space last housed JP Sushi. 610 E. Garvey Ave.

Temple City— Based in Beijing, but Sichuan in style, Chun La Hao Chong Qing Hotpot has opened in the shopping center on the northwest corner of Rosemead at Las Tunas. Five base broths, a wide range of add-ins and meats (including bullfrog) and items like black tripe or duck intestine are among the options. It replaces an Applebee’s, which apparently didn’t feel good in the neighborhood. 5701 Rosemead Blvd.