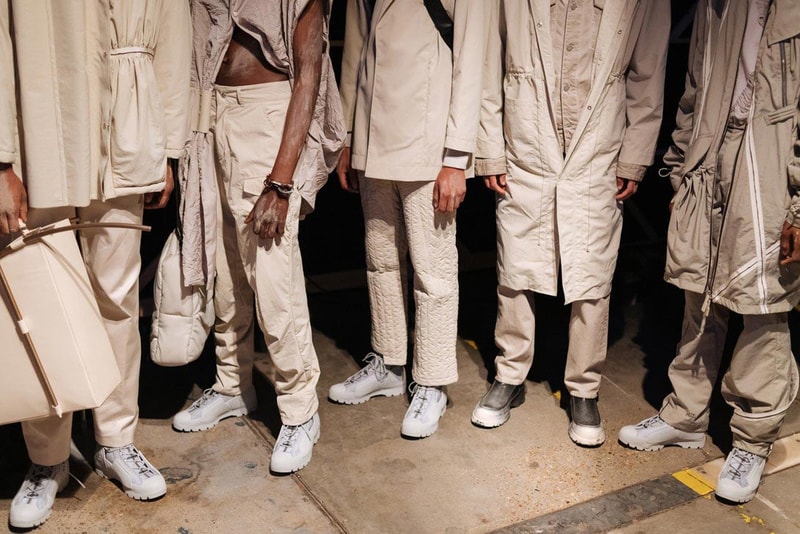 Though Fashion Month isn’t quite over yet — couture collections are still on the way — the seasonal ready-to-wear men’s collections have come to a close. Fashion editors, critics and store buyers have now parsed each presentation, drawing up reviews, selecting seasonal purchases and forecasting trends, as the general fashion-observing public watched the glitz and glamour scroll past on social media. Though any memory of the upcoming clothing will likely fade from the general consciousness before the Spring/Summer 2020 season arrives in stores, the event’s most exciting footwear designs will retain relevance for months to come.

Observers of all stripes can pick apart the subjective success of the latest sportswear collaborations and offer opinions on in-house designs, with various styles ideal for consumers of all income brackets. For those who loathe the arduousness of sifting through countless runway slideshows, we’ve once again recapped the 10 most notable on-feet moments from the festivities — though that isn’t to say that there aren’t plenty of runners-up we didn’t have room to mention.

The below picks represent our choices for the most headline-worthy in-house designs and collaborations (and yes, there are plenty of collaborations) that hit the runway for Spring/Summer 2020, in no particular order.

@virgilabloh and @futuradosmil have given a first look at an upcoming @nike Dunk Low collaboration, coming in either bold orange with dark blue detailing or “UNC” light blue. Both colorways feature Abloh and Futura’s signatures on the underside, which is visible through the semi-translucent sole unit. Stay tuned for pricing and release information. Photo: Pete Casta/HYPEBEAST France

Legendary graffiti artist Futura rejoined Virgil Abloh for Spring/Summer 2020, having most recently linked with the Off-White™ designer for Louis Vuitton’s Fall/Winter 2019 runway show. Futura got much more hands on with Off-White™’s latest seasonal range however, splashing his Pointman avatar across T-shirts, guiding the splashes of painted color across a host of layering pieces and even crafting some headline-worthy statues for the presentation itself.

But the locus of all this collaborative activity are two pairs of Nike SB Dunk Low sneakers. Splattered with paint and intertwined with dual laces, both shoes are emblazoned with the logo of Futura’s recently-revived clothing label to drive the sneakers’ collaborative nature home. To complete the design, Abloh’s requisite bold-face text is printed towards the heel and Futura’s signature is hidden beneath the translucent outsole. Unsurprisingly, no release date has emerged for Abloh and Futura’s collaborative SB sneakers, but stay tuned for updates as the year draws to an end.

Antwerp Six member Walter Van Beirendonck has maintained a clear trajectory for the past decade or so, splitting time between mentoring emerging creatives as the leader of the Royal Academy of Fine Arts’ fashion program and directing the whimsical designs offered under his eponymous label. Though Spring/Summer 2020 isn’t his first joint effort with Mikio Sakabe’s ambitious GIDDY UP project, this iteration did yield the duo’s most accessible sneaker to date — comparatively speaking.

Sakabe’s project focuses on 3D-printed sneakers, allowing for wildly inventive footwear that ranges from futuristic, springboard-like shoes to woven sneaker-boots with layered ovoids for outsoles. Beirendonck’s latest presentation utilized one of Sakabe’s more conventional options, a trim woven upper with an enormous bubble-like outsole. Resembling some kind of cartoonishly distended teeth, the shoes’ aesthetic appeal is arguable, but the sheer creativity of them is irresistible. And when it comes to the grind of Fashion Month, nothing compares to exceptional individuality.

Take a look at @dior’s new sneaker silhouettes that debuted at its Spring/Summer 2020 runway presentation. Alongside the now-iconic B23 shoes, Dior introduced translucent boots and running shoes inspired by the uniform of seasonal artist collaborator @danielarsham. Swipe to see what the collection has to offer. Photo: PA Mulier/@hypebeastfr

Continuing to reshape Dior’s menswear to his whims, Kim Jones has delivered some of the label’s most covetable luxury accessories to date. Though Dior has a long history of collectible bags, never before has a wider array of young men sought to purchase the Saddle bag or its branded jewelry, until Jones brought his street-leaning, collaboration-heavy vision to the table. For Spring/Summer 2020 he teamed with artist Daniel Arsham to provide thematic revisions of sneakers that have since become house staples, plus plenty of new models.

What’s there to say about Virgil Abloh’s Louis Vuitton output that hasn’t already been said, restated and repeated once again? Well, for starters, the footwear issued under Abloh’s direction has received comparatively little buzz aside from the staple 508 sneakers, which recently emerged in eye-pleasing futuristic and garden-inspired variants. Abloh’s sportswear inclinations have yielded court-ready lowtops and clunky derbies in past releases, but Spring/Summer 2020 introduced an array of runners that challenged Abloh’s work with Nike as the designer’s most covetable running shoes.

Plush suede and breathable mesh inform the muted sport shoes, reinforcing the luxury aesthetic at the core of Louis Vuitton. Simultaneously, the shoes intelligently reinvent the house’s classic monogram into clever streetwear graphics, tweaking the LV branding into a stylized plastic logo on the lateral side and embedded shapes in the heel. Elsewhere, Abloh underscored the collection’s gardening motif with tall molded boots embellished with florals and lug sole hikers, another update to the street staples the designer frequently tackles.

If anything, the aggressively torn-up Air Max 95 that hit the SS20 runway is the Japanese label’s most palatable release since its minimalist VaporMax. Offered in two tonal and one monochrome makeup, the shoe boasts stacks of raw-hemmed panels in place of its usual smooth upper, a natural complement to COMME des GARÇONS’ shredded garments.

For Fall/Winter 2019, Luke Meier debuted OAMC’s first adidas collaboration, the “Type 01.” Its follow-up apparently skips a few generations, as Meier and adidas’ joint effort for Spring/Summer 2020 is titled “Type 04.” Taking a similar tack to the Type 01, the Type 04 retains some deconstructionist detailing, like the minimalist facade and raw stitching near the ankle collar, but takes cues from hiking kicks to create a futuristic trail runner.

A grippy Vibram outsole and sturdy nubuck upper peppered with mesh cut-outs informs the sneaker’s streamlined shape, utilizing neutral tones to ensure maximum versatility. The shoe’s translucent plastic heel counter and shiny leather toe are some of the more style-conscious touches that tie in with OAMC’s knack for straddling the worlds of technical design and fashion-forward design.

@n_hoolywood debuted a footwear collaboration with @ugg at #NYFW. The offering includes chunky slides and oxford shoes in tonal black colorways with voluminous outsoles. Stay tuned for details on its release. Photo: UGG

Though it enjoys an immense following in its native Japan, Daisuke Obana’s N.HOOLYWOOD remains a relatively niche label in the West. Obana’s novel footwear experiments seek to change that perception however. Spring/Summer 2020 sees the label reuniting with New Balance and linking for the first time with UGG to deliver some playfully fashion-unfriendly footwear.

Clunky black shoes and a complementary pair of slide sandals marry UGG’s comfort-centric designs with N.HOOLYWOOD’s utilitarian inspiration, an ideal mingling of the Japanese brand’s military-, sport- and street-leaning influences. Meanwhile, the New Balance shoes are far more bold, sporting tonal orange detailing on a pared-down suede and mesh upper with bright accents on the sockliner and laces. Despite the unmissable hue, the sneaker retains a function-driven shape that serves the collection’s theme, complete with care-tag woven on the toe.

Craig Green has created an unshakable fashion legacy since making his solo London Fashion Week premiere a half-decade ago, a claim few other young designers could hope to make so early in their design careers. As such, that it took Green this long to join up with a major sportswear label for bespoke sneakers is surprising, to say the least. Sure, he’s turned out Grenson collaborations for several seasons and there were those one-off Nike concept shoes, but Green hadn’t prepped a signature shoe from one of the big sneaker brands until Spring/Summer 2020.

Sportswear titan adidas is the lucky recipient of Green’s thoughtful design ethos, with one of its more unconventional silhouettes selected to receive his full attention. Taking on the soccer-inspired Kamanda, Green upgraded the shapely silhouette with metallic hues on the upper, complemented by tonal outsoles and reflective alternate panels tucked in between the more saturated spots. Offered in brilliant red, green, purple and yellow tones, to name only a few, the shoes feature co-branding towards the ankle and patterned laces, as if they aren’t already enough of a statement piece.

London-based designer Kiko Kostadinov has turned out collaborations with ASICS almost since the inception of his label’s ready-to-wear offerings, with Spring/Summer 2018’s GEL-Burz followed by the GEL-Burz 2, GEL-Delva and the recent GEL-Sokat Infinity. For Spring/Summer 2020, Kostadinov created another bespoke model with the Japanese footwear imprint, introducing a variety of aggressively bold runners that sport patent leather and mesh in an alternating checkerboard pattern, offered in bright green and contrasting blue/yellow.

That was just part of the equation for Kostadinov, however, who also debuted graceful monochrome loafers in collaboration with Camper Lab. Neutral colors and clean lines distinguish the leather slip-on shoes from the ASICS collaboration and another footwear offering: a knee-high boot executed in lurid primary tones that make the ASICS look downright understated.