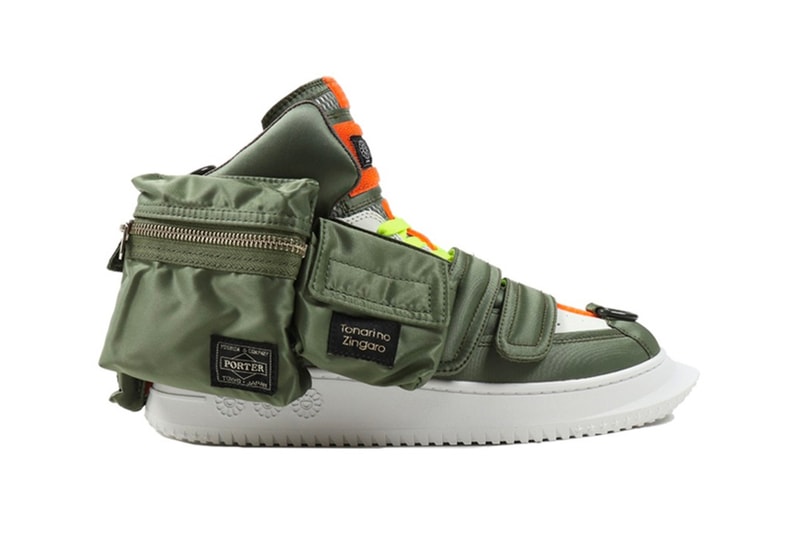 Previously teased last year in October, Takashi Murakami and PORTER’s rather illustrious teaming has undoubtedly been one of the most hyped collaborations of 2019. After the recent release of the collaborative bag range, the artist and bag manufacturer have now announced that the collaborative shoe, the “BS — 06” T.Z. Original sneakers, will be releasing via raffle this week.

The shoe itself relishes in the brand’s famed TANKER bag series, which is celebrating its 35th anniversary this year. Taking on the iconic military olive green and orange tones PORTER is known to employ, the shoe takes on a utilitarian design ethos due to the interchangeable pouches that line the shoe’s collar. The upper hosts a bevy of Murakami influences as well, from the tongue and heel branding, to the “Tonari no Zingaro” slogan that lines the lacing eyelets. This is all met by a lusciously chunky white outsole, which has been emblazoned with a variety of Murakami Flower motifs. Alongside the shoes themselves are four pouches per each shoe, three laces, and a custom box that details the shoe’s design.

You can take a full look at Takashi Murakami and PORTER’s “BS — 06” T.Z. Original sneakers in the gallery above. As announced via longtime friend of Murakami, Cherry Fukuoka, the shoes will be raffled via Fukuoka’s web store — if you’d like to apply for the raffle, you can do so here. The retail price is set at ¥60,000 JPY (approximately $560 USD).

For more related news, PORTER is teaming with kolor for color-blocked bags.