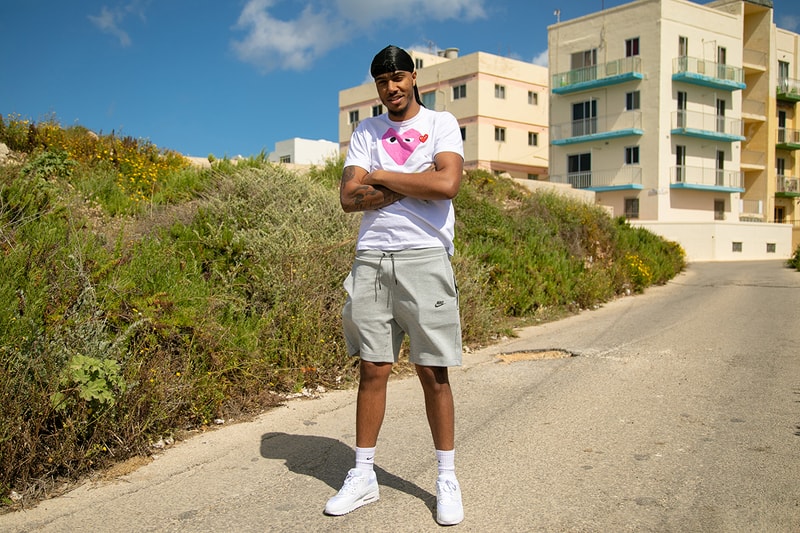 In our latest installment of streetsnaps, we catch up with London rapper AJ Tracey during his stint at the Annie Mac Presents: Lost & Found festival in Malta.

His performance at AMP Lost & Found follows his impressive year of releases which includes his debut album Doing It and the recent self-released eponymous debut studio album. This week, the rapper dropped the visuals for "Ladbroke Grove," which pays homage to his Moroccan roots and his local London neighborhood, which the song takes its name from.

Catching up with AJ in the coastal area of St. Pauls Bay, Malta, we capture the rising star in one of his go-to relaxed fits, effortlessly tinged with nods to the London scene. Wearing a COMME des GARÇONS PLAY T-shirt, heather grey Nike shorts and a clean white pair of Nike Air Max 90s, which are paired with matching white tube socks.

AJ Tracey will soon be heading on his North American tour following the release of his eponymous album — which features the likes of Giggs, Jay Critch, and Not3s — before he heads back to the UK for sets at Wireless, Reading & Leeds and Parklife.

Take a look at AJ at the AMP Lost & Found festival above and check out his North American tour dates below.

In case you missed it, check out the HYPEBEAST guide to the best European festivals this year.