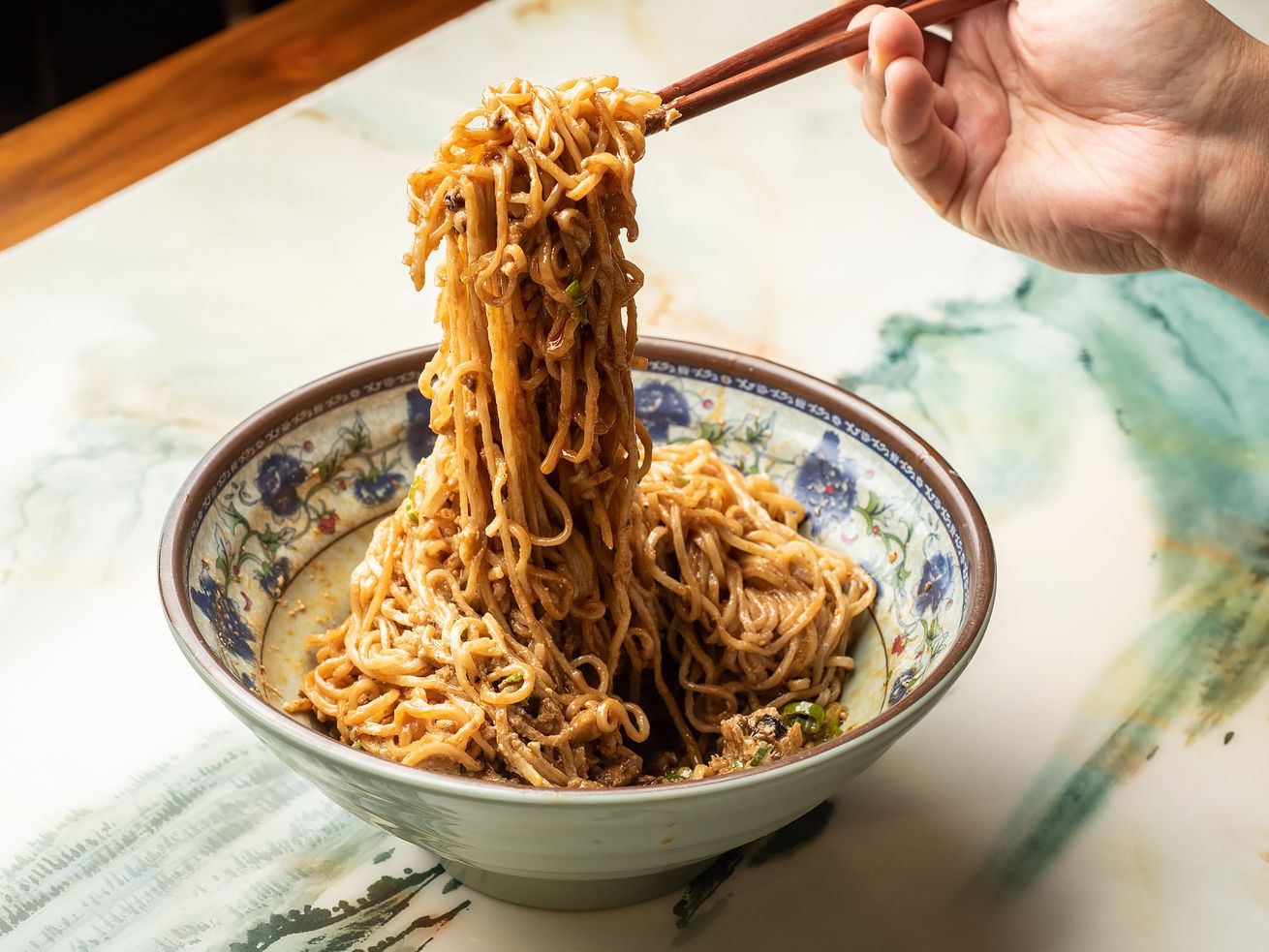 There’s no shortage of noodle places in the San Gabriel Valley, so for a restaurant to stand out from the crowd, it truly has to offer something special. That’s certainly the case with Noodle Harmony in Monterey Park, which features a unique combination of Sichuan noodle dishes and Hunan rice noodle soups, making for a busy one-stop shop in the SGV.

Eater contributor and local food writer Kristie Hang first mentioned the opening on social media, and shortly thereafter users on the Food Talk Central message board began discussing the small, well-appointed Noodle Harmony, which opened last August in Monterey Park. It replaced a Taiwanese deli that operated for more than a decade in an aging shopping center that hadn’t seen a new tenant for some time.

Manager Travis He explained the story behind the restaurant owned and operated by his father, Yufeng, and uncle, Yi. Having operated a restaurant in China prior to coming to the U.S., Yufeng hoped to open a restaurant in the SGV along the lines of his favorite restaurant in Hunan. Originally from Hengyang, in Hunan Province, Yufeng brought the Hunan recipes, while uncle Yi, from Chengdu, provided the Sichuan recipes. This led to the Chinese name for the restaurant, which translates to “double combination” to reflect the two styles and two different flavors. As a simplification, they chose Noodle Harmony as the English name.

The focused menu contains just 32 items across appetizers and entrees, and is mostly full of winners. One of the standout noodle dishes is the Chengdu-style dry noodle with house sauce. Similar in flavor profile to the better known dan dan mian, the noodles are reminiscent of Wuhan’s signature dry noodle dish, re gan mian. As with much of the Noodle Harmony menu, the sauces atop the noodles are what truly set it apart from other restaurants.

And then there are the dan dan mian themselves (listed as number 15 on the menu). Noodle Harmony’s version of the well-known dish ranks alongside some of the more acclaimed Sichuan noodle restaurants in the SGV, and features a nice, spicy kick. A vegetarian version, loaded with shredded cucumbers and carrots, is also available upon request. While Noodle Harmony doesn’t make their noodles on site, they do contract out for noodles made to their specific requirements.

Szechuan-style dumplings are another common item on Sichuan menus. They’re often served drowned in chili oil, and while this approach is usually tasty, it can’t be described as light. At Noodle Harmony, a deft touch with the chili oil makes for an unusual lift in the dish; Just don’t mistake light for bland, as there is still plenty of spiciness and flavor in the bowl.

Another common appetizer on Sichuan restaurant menus, mung bean cold noodle, is truly unique at Noodle Harmony. While some Sichuan places serve a thick, rectangular “matchstick” style, at Noodle Harmony, they are much thinner. The saucing is unlike any in the SGV, with what could be described as an almost smoky flavor. Travis He says this unique approach is from blending his father’s Hunan and uncle’s Sichuan recipes into one.

While the Sichuan portion of the menu attracts most diners and receives much of the attention, the Hunan portion deserves more love. There are plenty of Hunan restaurants scattered around the SGV, but one emphasizing Hunan-style noodles is a true rarity.

From that portion of the menu, the beef noodle soup and house deluxe noodle soup are two points of pride and worthwhile choices. Manager He points out that Noodle Harmony creates individual broths for each noodle soup, long simmering them for up to six hours. He also reminds that the perception of Hunan cuisine as solely being fire and spice doesn’t apply to many of the broths, which are light and clear by design, allowing the focus to be on the flavors of the ingredients.

The tofu dishes and a dish as omnipresent as pig’s ears in chili oil are among the other worthy selections. And, for offal fans, there are intestine and gizzard selections. Noodle Harmony is a stellar, and reasonably priced, specialty SGV restaurant that keeps its offerings focused on two specific regions. The noodles themselves are pretty standard, but it’s the sauces and toppings, as well as the side dishes, that really stand out. And for around $20 a person (or less), it’s an incredible deal.