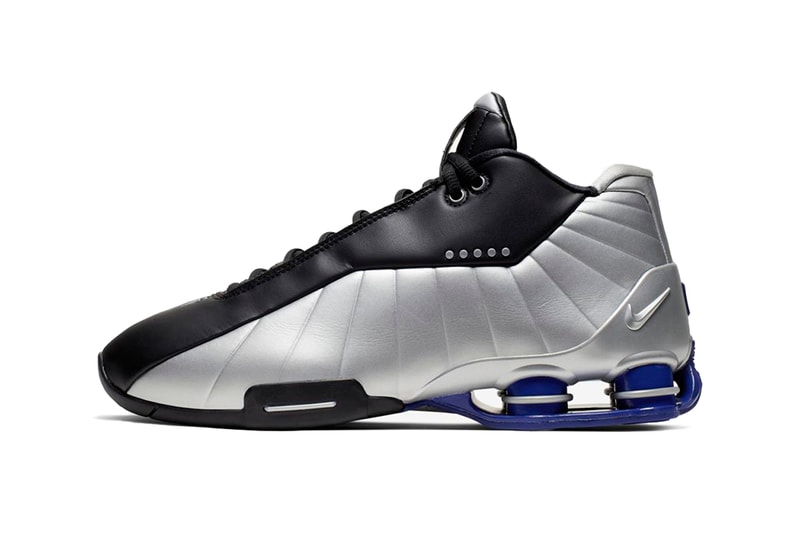 Nearly two months, Nike teamed up with Brazilian pro-footballer Neymar Jr. for a "Black/Gold" spin on the Nike Shox TL silhouette. That selection served as the aforementioned pairing’s third Shox collaboration of 2019, and featured "gold and silver detailing and highlights" on its lace loops, Swooshes and the heel area’s Shox cushioning system, as well as a mostly-all-black upper with mesh in its construction. Now, Nike is revealing plans for another iteration of the Shox BB4. This time around, consumers are receiving a Nike Shox BB4 with a striking blend of "Metallic Silver" and black tones. Specifically, the lower half of the sneaker is dressed in "Metallic Silver," while the top half contains a glossy black finish.

"Although Shox technology was already a 20-year-old concept at the time of its release, the idea was too ahead of its time, requiring foam that hadn’t been invented yet," reads Nike’s official description of the new Nike Shox BB4 "Metallic Silver." "Imagination turned into reality in 2000 and the OG ‘Metallic Silver’ colorway arrives with the same head-turning, futuristic basketball design."

Back in June, Size? unveiled an exclusive Nike Shox TL in a bold "Viotech" colorway
.