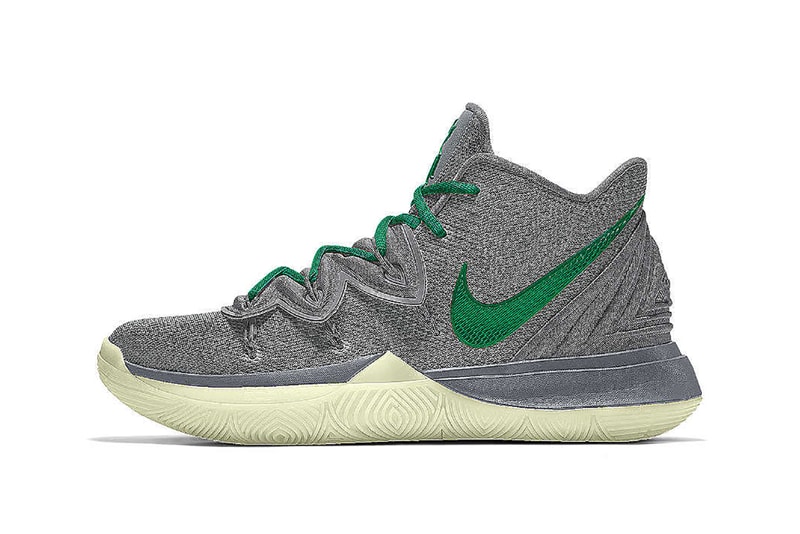 The Nike Kyrie 5 has recently seen a number of playful overhauls such as a soon-releasing Friends-inspired pair and a "Have a Nike Day" makeover. Building on this, fans of the basketball silhouette can now customize the Kyrie Irving pair for themselves.

Made from engineered mesh, the Kyrie 5 "By You" comes in seven base colorways and is open to endless customization possibilities using Nike’s design edit tool. Starting with hues such as "Cool Grey" and "Clover," a colorway which nods to the Boston Celtics, Kyrie 5 fans can head to the customization stage to add basketball-influenced colors including "Game Royal," "Team Red" and "Court Purple."

The Nike Kyrie 5 "By You" allows you to show off your creativity or create a pair that pays homage to your favorite team, and is editable to the last detail — sole customization is split into sections including heel, midsole, midsole speckle, outsole and outsole treatment, with finishing touches such as inner tongue Kyrie-font text allowing for a personalized flair.

Sole customization is the standout feature of the Kyrie 5 "By You," allowing wearers to add solid rubber, translucent, XDR or even glow-in-the-dark soles to their pair. As usual, the Kyrie 5 is complete with an Air Zoom Turbo articulated cushioning sole unit which provides energy return and its foot-wrapping flytrap overlay. Priced at $150 USD, head over to Nike.com to customize your own pair of Nike Kyrie 5s "By You."