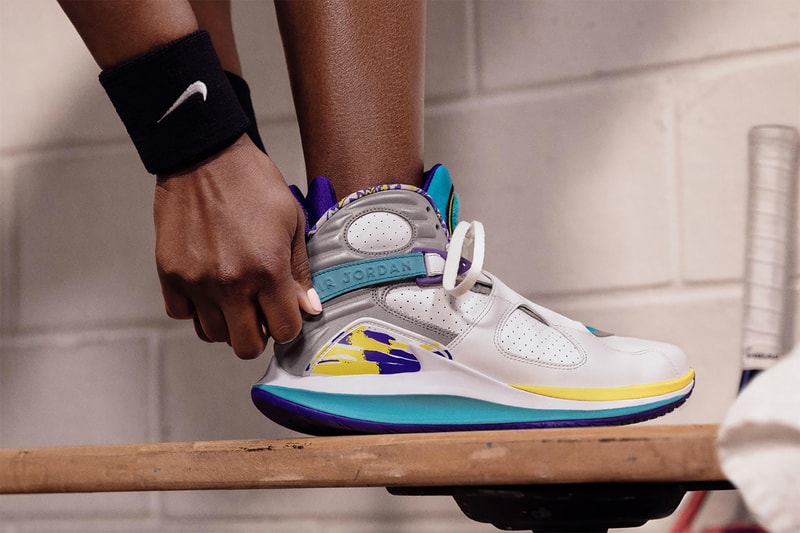 Launching the NikeCourt Zoom Zero last summer for the 50th anniversary of the U.S. Open in a peach colorway, Nike returns with a brand new design featuring the silhouette in a "White Aqua" upper taken from the Air Jordan VIII. American tennis player Sloane Stephens will be sporting these new kicks, which she co-designed, at this year’s Flushing Meadows.

The Air Jordan upper used in this pair was created in 1993, Stephens’ birth year. Hence, the embroidered number 93 on the left shoe. The Zoom Zero’s midsole and outsole have been incorporated to the piece featuring a full-length Zoom Air unit made specifically for tennis players. The high-top upper includes color blocking from the women’s exclusive "White Aqua" colorway and integrates a chenille fabric patch and crossover midfoot straps. As co-designer, Stephens talks about the inspiration behind the craftsmanship and said:

“I’ve always loved the Jordan brand, and the 8s in particular have had a special place in my heart because they were released the year I was born. Nike and I decided to take that existing model and color way and modify them for on-court purposes.  Design wise, I wanted to ensure that all aspects of the shoe were functional on court so we chose breathable fabrics for speed, flexibility, and comfort; all while keeping in mind the beautiful silhouette of the shoe. The coolest part is that this will be Nike’s first high top on-court sneaker. I think this is the first step in helping to redefine tennis wear for women. Basketball performance shoes are seen on and off court because of both their style and functionality. This design is the perfect first iteration of a tennis lifestyle shoe and I look forward to many more.”

The NikeCourt Air Zoom Zero Aqua will release on nike.com during Stephens’ play at Flushing Meadows which begins on August 26 and ends on September 8.