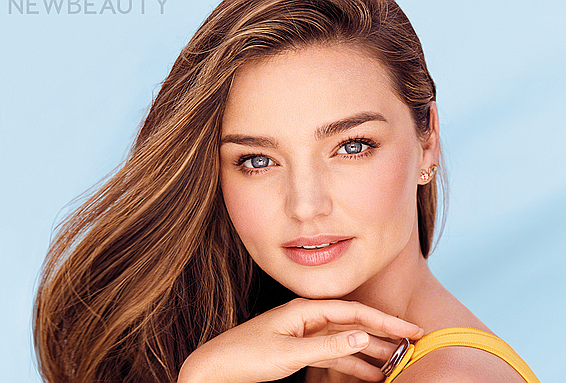 When Miranda Kerr met her husband Evan Spiegel, there was a spark, with a little skin care on the side.

Luckily for Spiegel, co-creator of Snapchat, little did he know
that he had just met not only a supermodel and Victoria’s Secret
Angel, but also a beauty company CEO equipped with some
glowing-skin recommendations.

You May Also Like: How Miranda Kerr Lifted and Tightened Her Face Before Her Wedding

“I was like, ‘Why don’t you try this,’ and I gave him the Noni Glow Face Oil ($68). Ever since, he hasn’t stopped using it! He always
says, ‘Oh my God, Miranda, this is the only product that has
helped my dry skin.’ Now, he won’t go anywhere without it.”

Miranda’s potent facial oil made us first fall in love with her
too. Here, the soon-to-be mom of three shares how she maintains
her holistic approach to healthy living, even through modeling,
marriage and motherhood.

NewBeauty: You were "goop" way before there even was a goop…It’s like you’re the original coconut oil-puller.
Miranda Kerr: It’s funny because I remember giving Gwyneth the
products when I had launched in 2009. At the time, she
was talking about how she just started this website called
goop, and I was like, ‘Oh! That sounds right up my alley.’
Now our products are sold on her site, so it’s really come
full circle. I know the self-tanner is flying off the shelves
because she texted me recently and said, ‘This tanning
lotion is incredible. I can’t believe the sales. It’s crazy!’

NB: A tanning product that doesn’t smell
bad is always a good thing. Have you
always been into health and wellness?
MK: I grew up that way—there was always the philosophy
that health was wealth. I grew up in a tiny country town in
Australia called Gunnedah in a family that was, and still is,
very health-conscious. Both my parents and grandparents
raised me with that awareness of well-being and health,
and educated me on the importance of organic—and I
didn’t realize that other people didn’t do the same. It was
always kind of my passion; that continued when I studied
in Australia, and when I got to New York, I studied another
course at [the Institute for] Integrative Nutrition. I was
modeling full-time and studying, and I became a certified
health coach. The interest in health has always been
there. I’m still constantly reading books on health and
wellness, and how the mind, body and spirit are all
connected. There’s always so much to learn. 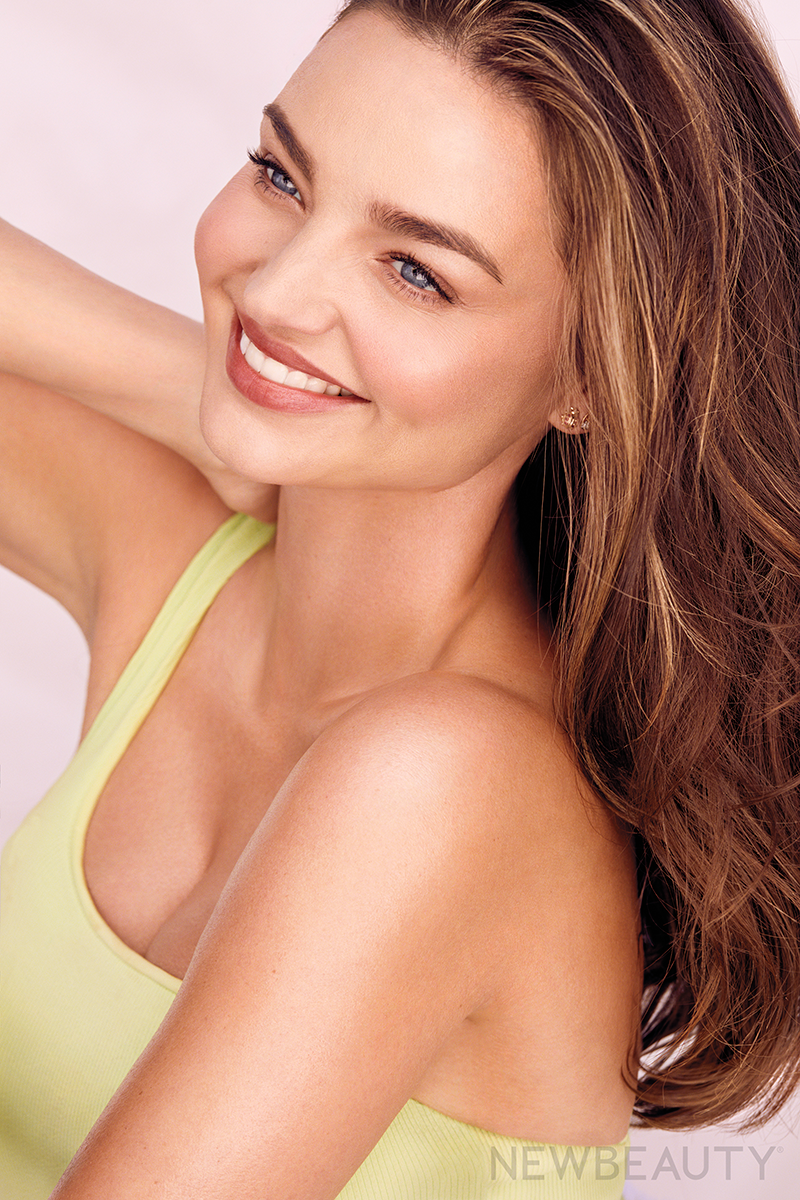 NB: That’s not necessarily how a lot of
people grow up in the U.S. Do you
think it’s changing everywhere?
MK: I think it’s really exciting that people are becoming
much more educated and aware of the benefits of health
and wellness. They’re looking for those different self-care
avenues and practices that will uplift them and complement their lifestyles. There are so many different tools out
there that can work, but everyone is different. Somebody’s
medicine might be somebody else’s poison.

NB: There’s a lot out there.
MK: Yes, and it’s important to find what supports you and
your wellness and explore that further. If you give your
body the right nutrients, it’s going to have the chance to
function at its best. At the same time, you’re feeding your
mind with positive thoughts and balancing your time with
work, friends and family and all of that—all of those areas
play an important role in your overall health and wellness.
I’ve always said that I try to be 80-percent healthy and
20-percent indulgent across all areas—not just in what I
eat, but in general. Even my character is 80-percent good
girl and 20-percent naughty. I think it’s important to not
put pressure on yourself to be super strict about anything.
Balance is important.

NB: And that carries over into your entire life?
MK: When it comes to my skin and body, I’m 80 percent
using KORA, but then there’s that 20 percent that comes
in where I use makeup that’s maybe not certified-organic.
If you’re going to get the same, if not better, results from
using products that are healthy for you, then why wouldn’t
you? It’s kind of a no-brainer. Why slather your body in
chemicals when there are so many things we can’t avoid?
We can’t avoid pollution, we can’t avoid radiation when
we’re flying, we can’t avoid what the food is cooked in when
we go out to eat. But there are things we can control, and
one of them is what we’re putting on our skin.

NB: That makes sense.
MK: That’s my logical way of thinking, and it works for me.
It’s the same way when I eat. I love to eat healthy, but I also
love to indulge. I eat out sometimes and it’s not organic. If
I go to a friend’s house, I’m not going to ask, ‘Is it organic?’
I’m going to enjoy the food they prepared for me with love.
I’m not going to be crazy.

NB: Do you teach the same to your children?
MK: Flynn knows. He did a project at school about healthy
food and said something like, ‘I’m blessed to be able to eat
healthy, organic food.’ Then he picked up a vegetable and
asked if it was organic. I told him, ‘Yes, Flynn, we grew it in
our backyard, it’s organic.’ He’s so inquisitive and curious.
He loves watching me cook, and he also loves yoga. When he
was in my belly, I would do yoga every day, so he has a deep
connection with it—we still do yoga together at least once a
week. He’s also very aware of his environment. He loves
being outdoors, and he’s really conscious of things like
turning off the water when he’s brushing his teeth, and
taking a quick shower. He also picks up trash when he sees
it. I think teaching children at a young age to do all of these
little things like turning the tap off, or turning the lights off,
or bringing the reusable bag to the supermarket, are things
everyone can do. They make a big difference.

NB: Is the beauty business also a family affair?
MK: Evan has very dry skin—it’s hereditary, and he’s had
it his whole life. But now he uses the oil, and the body
lotion, and lately he’s been obsessed with the turmeric
mask. He doesn’t use it as an actual mask; he keeps it in
the shower and uses it as an exfoliant. He wakes up at 5:30
every morning, and what he loves about it is that it has
peppermint oil in it, so it’s so invigorating. He says he can’t
be without it because it’s his little boost of aromatherapy
in the morning! It gives him energy! His skin, let me tell you,
it is absolutely glowing and radiant now. It’s incredible to
see the benefits firsthand—right in front of your eyes. 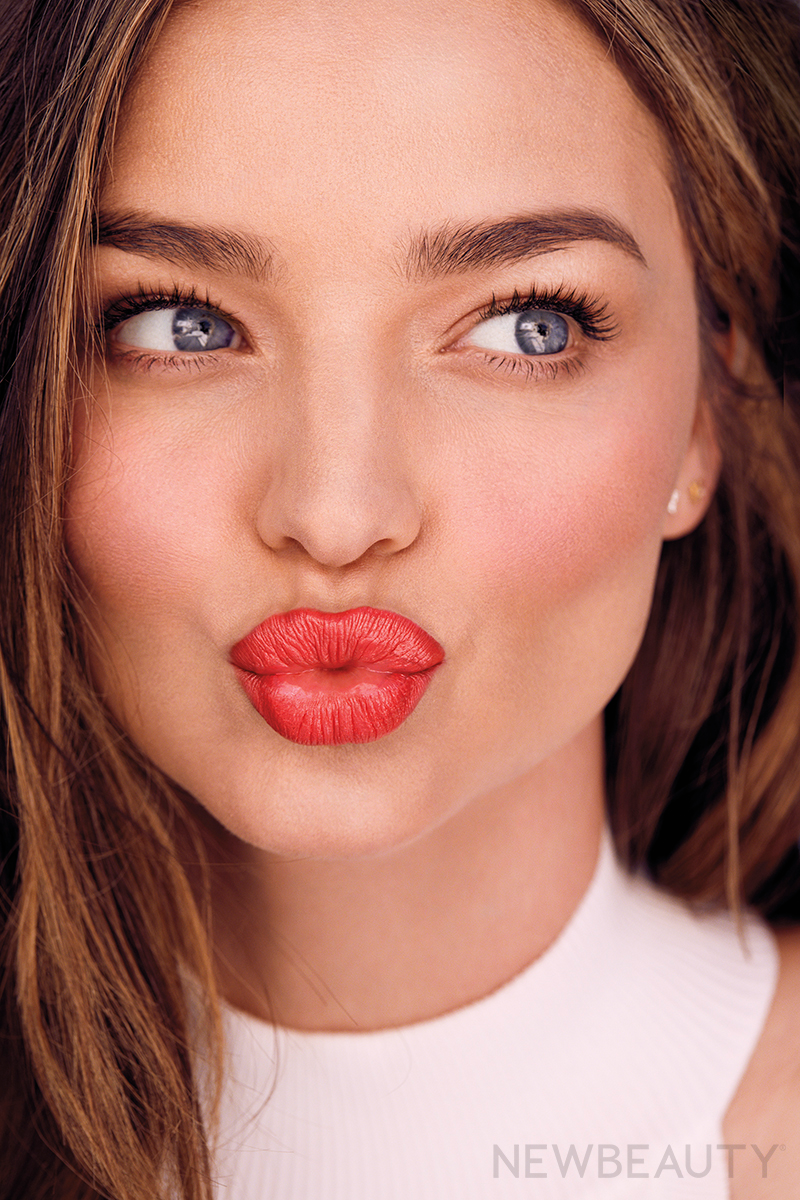 NB: That’s a solid testimonial.
MK: People tell me all the time! My mom had rosacea, and
when I was still sampling the products, I gave her the face
oil and the moisturizer and it completely healed her skin.
The lack of confidence she had when she had rosacea—
she didn’t want to go anywhere and it made her feel very
insecure. The products are incredible for sensitive skin.
I even use them on the baby [Hart], and he’s 11 months now.
He’s like his dad: he started to get dry and developed a
little bit of eczema on his legs, so every night when I bathe
him, I use the body wash, the body lotion and the body
balm. It has completely healed his skin.

NB: It sounds like everyone in the
family is a fan.
MK: Evan will not go anywhere without his products!
I tried to take them from him on our family vacation. He
was on his way home and I was on my way to Europe.
I said, ‘I don’t want to travel on the plane without my face
oil and mine is packed in my suitcase. Can I please take yours because you’re going home now?’ He was like, ‘No
way. I’m going to need my face oil.’ I said, ‘Honey, you’re
going to get it in a couple of hours when you’re home. It’s
no big deal.’ But his answer was: ‘No, I like to always keep
that in my bag because what if I forget to take the one
from home and I have to go somewhere?’ I finally said,
‘Fine! Keep the face oil. It’s fine.’

NB: Do you both share any other wellness
“musts” in your home?
MK: We have a lot. We have the air purifier. We have the
stickers you put on the back of your phone for radiation.
I have the EMF detector that picks up the waves in the air.
I’ve had the whole house checked by a professional who
looks for things like EMF waves and things like that. I even
have something installed in my Malibu house to turn out
all the power while we sleep. It’s basically a button that
turns all the power off, except for the fridge and security
cameras, in the nighttime. So when you go to sleep, you
don’t have any Wi-Fi or electricity in the house at all.

NB: That’s pretty serious.
MK: It’s like going camping! I also have an alkaline water
filter so I can pick the pH of our water. There’s a lot of
research on that—you don’t want to be going too alkaline
because you do need a little stomach acid to digest your
food. I typically choose somewhere around the 7.5 to 7.9
mark for the water. Then I like using Palo Santo to clear the
energy in the space, and I also have little diffusers around
the house with essential oils, depending on what’s going
on. We even mop the floors with hot water and eucalyptus
oil, which is what my mother used to do. It’s good for the
wood and it’s antibacterial. It also smells really nice.

NB: Back to the business question: There
must be some very difficult things about
running your own company, right?
MK: The hardest thing for me is probably our certification
process—every product has to be certified and recognized
by COSMOS. It’s the most heavily regulated ingredients
system and it guarantees that there’s nothing toxic or
synthetic—no pesticides, herbicides or chemicals—used
in the production of the ingredients or the manufacturing.
To achieve it, 95 percent of a product’s ingredients must be
natural. The process is long and tedious, but I wanted it
because there’s so much greenwashing out there these days.

There’s so much that goes into it.
MK: There should be! It’s going on your body, on your skin.
Until people know and are educated about it, they don’t
even think about these things, but they’re important. I
know it’s a silly example, but if we put unleaded gas in a car
that requires leaded gas, it’s not going to work. We’re the
same—we need to put the right fuel in and on our bodies
for it to function properly. There’s so much logic to it.