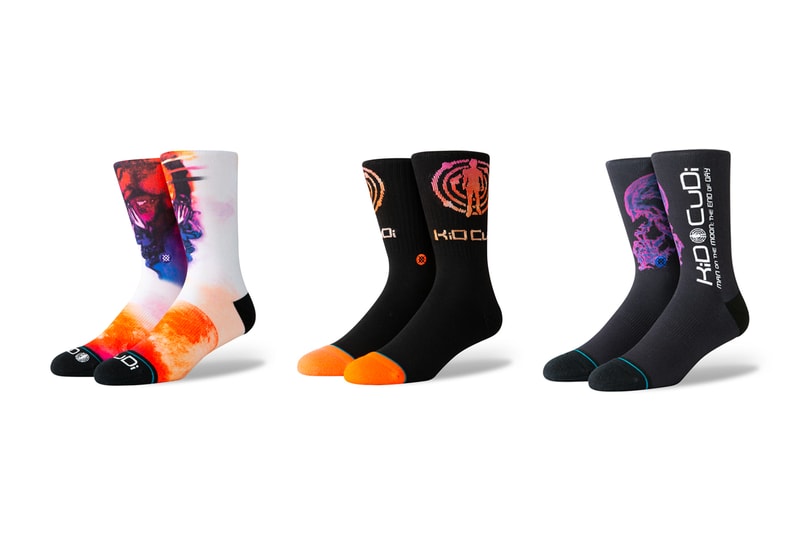 Kid Cudi’s debut studio album Man on the Moon: The End of Day is celebrating its 10th anniversary this September 2019 with a special socks collection from Stance.

Releasing in three variations, the apparel utilizes elements from the vivid album art and its accompanying visuals. One offering features the colorful illustration used on the Man on the Moon cover against a white base, while the black options highlight an orange human-like emblem and the art from his "Pursuit of Happiness (Nightmare)" single.

Man on the Moon was released in September 2009 under Kanye West’s G.O.O.D Music imprint. The concept album includes narration from Common and guest appearances from West, MGMT and Ratatat. Topping numerous year-end lists thanks to singles like "Day ‘n’ Nite," "Make Her Say" and "Pursuit of Happiness (Nightmare)," it also went on to garner Grammy nominations under the categories of Best Rap Song, Best Rap Solo Performance and Best Rap Performance by a Duo or Group.

Cudi is currently prepping for the release of his seventh studio album Entergalactic and its accompanying animated Netflix series. A release date for both projects have yet to be announced.

Take a look at Stance’s anniversary socks above. Each pair falls at $18 USD and will be released at stance.com and at select retailers.

In other news, KITH has linked up with Sprite for a collaborative capsule.