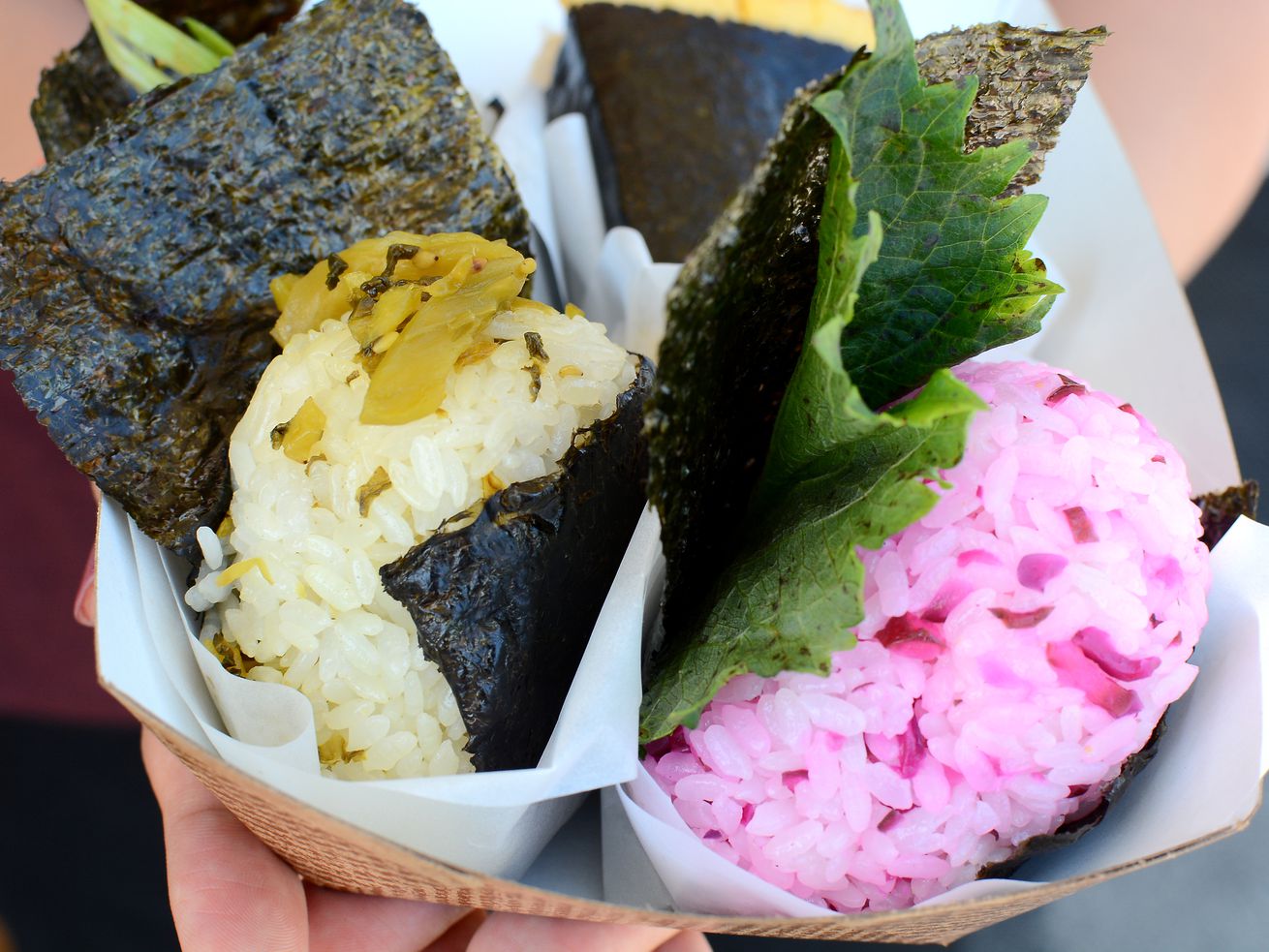 After winning hearts at the 626 Night Market, Jichan’s Onigiri-ya has found a permanent home

Onigiri, a Japanese staple of hand-packed rice formed into plump triangles and wrapped in seaweed, may very well be the world’s most perfect snack. Whether grabbed to-go from a convenience store’s shelves or made freshly at home, these humble pucks fuel young and old with equal parts heft and heart.

“I grew up eating rice balls — it’s comfort food,” shares Joe Miyano. “I fondly remember my grandpa in Japan making onigiri for me. He was a great cook; he used to make gigantic rice balls with salted salmon and umeboshi, or salted pickled plums.”

When Miyano found himself burned out while working in commercial video production, he decided to partner with childhood friends Akira Yoshimura and Ray Atianzar to bring onigiri to the masses. They named their venture Jichan’s Onigiri-ya — jichan is Japanese slang for grandfather. “The name of our business is a way we can always embrace the memories we have with Jichan,” explains Miyano on the restaurant’s website. “Jichan has always been a respected and influential person in our lives.”

After popping up and winning hearts at the 626 Night Market during the summer of 2017, and combing through real estate listings while catering various gigs for most of 2018, Jichan has finally settled down on the southeast edge of Monterey Park, Miyano’s hometown.

It’s easy to miss the restaurant driving west amidst the undulating hills and grassy expanse of Resurrection Cemetery, but look for the festive display from Vasquez Flowers spilling onto the sidewalk. While the 1,000-square-foot space overlooking headstones and knotty power lines might not seem like much to the untrained eye, it was the location of Miyano’s dreams.

When Ono Grill shut its doors for business, the Hawaiian restaurant left behind a cooking hood, grease trap, and even some cooking equipment — a trifecta of tremendous treasures for a modestly funded venture. With a bit of elbow grease, the addition of contemporary counters and stools, and a mural of jichan auspiciously overlooking the entire operation, the space is now a welcoming haven for onigiri.

General manager Rick Kawada runs the day-to-day operations along with Miyano. Yoshimura, who’s known as the “recipe guy” among the partners, prepares the sauces and marinades. The menu has been expanding over the past few weeks after the opening on May 1, with the team learning what resonates with diners and picking up operational efficiencies along the way.

The foundational onigiri, carefully handmade to order using California-grown short grain rice, come packed with an array of proteins, pickles, and vegetables. The grilled salmon rice ball, with its seared grains and deft scallion-sesame-soy flourish, is an early standout. It wouldn’t be out of place on the menu of an izakaya and paired with a stiff drink.

Another early hit is the onigiri stuffed with twice-fried Japanese chicken enrobed in dashi rice made from shiitake mushrooms and plenty of umami-forward bonito fish. Miyano’s favorite changes often, but the mentai-tamago onigiri with spicy pollack roe and a Japanese egg omelette is his current rice ball of choice.

For now, the restaurant is focused on fine tuning the operation, which means keeping diners coming back with memorable food and fast service, and making smart hires to execute both consistently. Jichan would be proud.