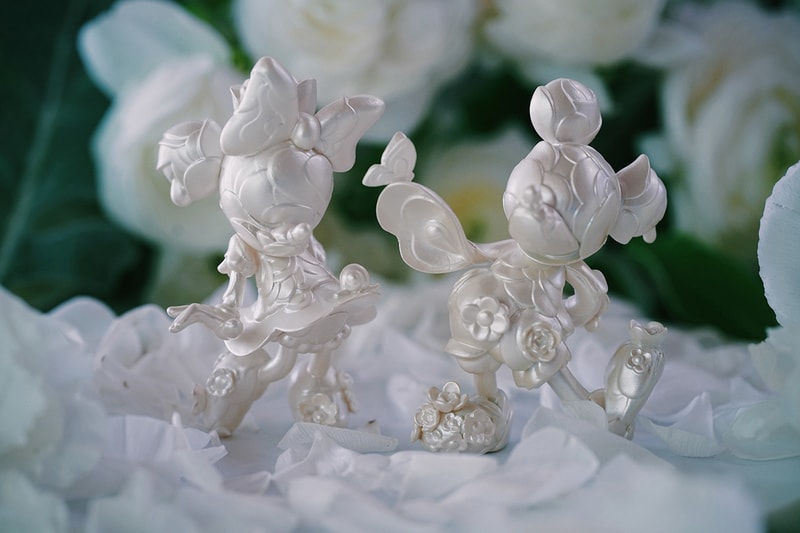 Last year, renowned artist James Jean and Good Smile Company created a highly-popular limited edition porcelain Mickey and Minnie Mouse sculpture set, and due to popular demand, the two released a follow-up with six new smaller identically-styled iterations in a variety of colors. Now, continuing on with their collaborative celebration of the two characters’ 90th anniversary, Jean and the Company are releasing a pearlescent "Snowdrop" colored Mickey and Minnie Mouse collectible set.

Standing at 3.9-inches tall, the sculptures feature the exact same detailing as the previous releases, immortalizing the two characters as pearlescent succulents adorned with James Jean’s intricate petal motif, though in a colorway reminiscent of the collaborators’ debut porcelain version.

If you’ve missed the previous two drops, or for those hoping to collect them all, the new "Snowdrop" set will be sold exclusively at the D23 Expo — the largest Disney convention — in Anaheim, California for $20 USD.

Exclusively for @disneyd23 Expo on Aug 23-25, @goodsmilecompanyofficial is releasing a special vinyl figure set of my 90th anniversary Mickey and Minnie Mouse concept in a pearlescent “Snowdrop” colorway. ? by me. #d23expo #goodsmilecompany #jamesjean #disney #10yearsofd23