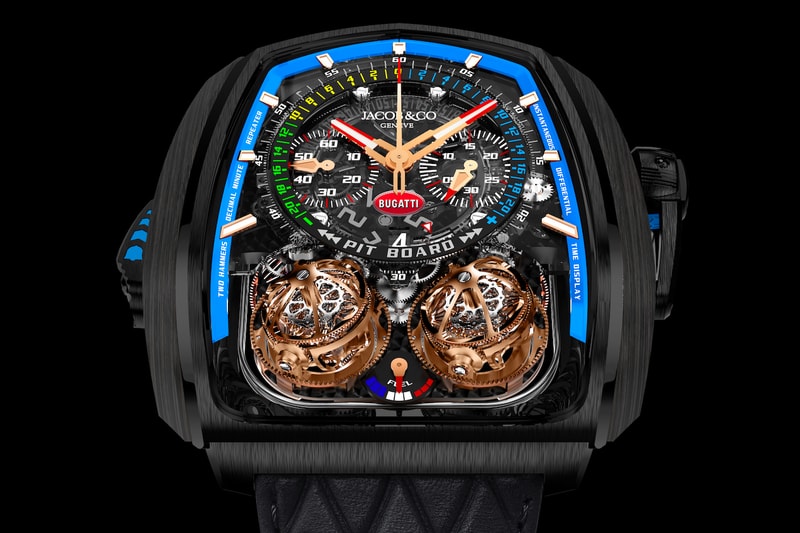 The Twin Turbo Furious Bugatti Edition features a Bugatti logo centered in a turquoise blue-rimmed speedometer dial, the vibrant blue making up the colors of the French flag along with the red and white hands. The power reserve indicator is cleverly retitled "fuel," with the gauge in three colored stripes mirroring the French flag once again. Only 39 units will be made, each having a unique number. 18 will be made in carbon fiber, another 18 in rose gold, and only three will be made with diamonds.

The second watch in the release — the Bugatti Chrono Edition Limitée 110 Ans — is based on Jacob & Co.’s Epic X Chrono, which utilizes a skeletonized self-winding chronograph movement. The forged carbon case holds a black dial with loud and vibrant French flag-colored stripes running down the center. Of course, the Bugatti logo is also featured on the dial. As a limited edition timepiece, only 110 units will be made for this model.

We are proud to announce our long-term partnership with @bugatti,  the designer and maker of the most extraordinary automobiles in the world. The Epic X Chrono debuts in Forged Carbon to pay tribute to the car that looks the world’s fastest – even when standing still. The Bugatti Chiron’s menacing looks inspired the Forged Carbon case and black X-bridge over the dial, whereas the manufacture’s long-standing French heritage is represented by the French flag – both on the dial of the Epic X Chrono, as well as on the side mirrors of the Bugatti Chiron Sport "110 ans Bugatti" Edition. #jacobandcobugatti #jacobandco #bugatti #chiron #bugatti110ans #bugattilifestyle