Scroll through a news article about frequently googled Democratic presidential candidate Marianne Williamson and you may come across a reference to the Philosophical Research Society in Los Feliz.

Located in a classic Mayan Revival building on the corner of Los Feliz and Griffith Park boulevards, the society is where Williamson began her career as a spiritual leader in the mid-’80s giving talks on the New Age book and self-study program A Course in Miracles.

Long a center for Los Angeles’ spiritual milieu, the 85-year-old non-profit continues to welcome a diverse community of seekers. It boasts an extensive library of esoteric religious texts, curated by the society’s late founder Manly P. Hall, and hosts workshops and lectures on topics ranging from oracle card reading to The Book of Love by 13th century Persian poet Rumi.

“What we find in our work at the society is that people exhaust the channels available to them, whether that’s Twitter or Instagram or Facebook,” Salyer said. “We see that many people are really yearning for what Marianne calls the ‘deeper conversation.’” 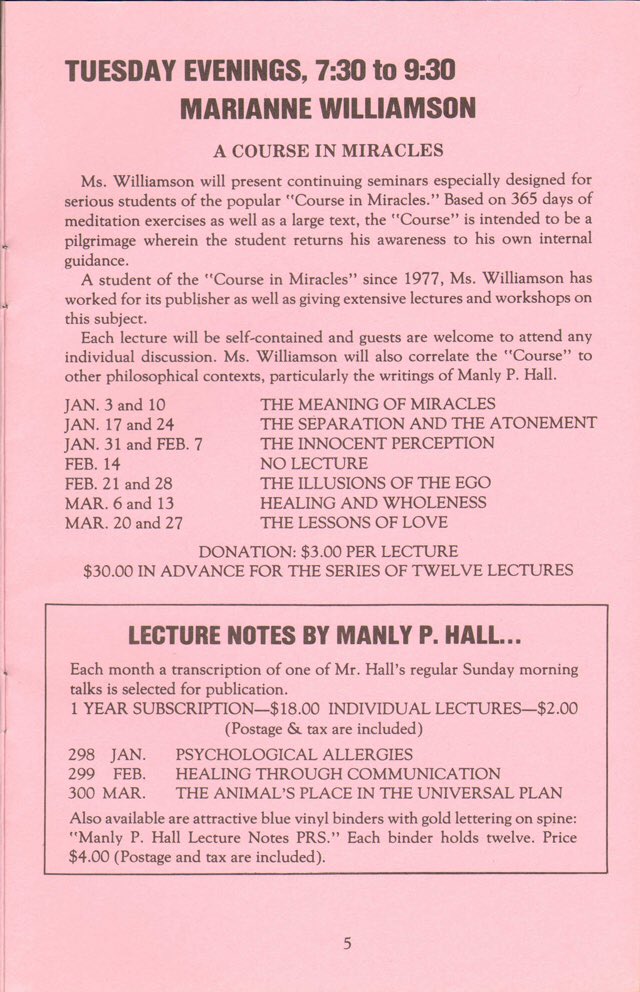 To understand Williamson’s message, it helps to know a little bit about A Course in Miracles, the over 1,000-page volume she lectured on at the Philosophical Research Society. Between 1965 and 1972, Columbia University research psychologist Helen Schucman “scribed” the course, which she claimed to have channelled directly from Jesus. The result was a psychological workbook of sorts aimed at helping people heal trauma by uncovering the illusory nature of the physical world and realizing an ultimate spiritual reality outside of time and space, expressed as a kind of all-encompassing love.

Critics have pointed out that the course’s teachings have led Williamson to make some deeply controversial statements about vaccines, anti-depressants, and mental health, comments she’s attempted to walk back during her campaign.

As woo-woo as all that sounds, Mitch Horowitz, an expert on esoteric religions and author of Occult America, said Williamson’s interpretation of the course is part of a long tradition in the U.S. of seeking a direct connection to the divine. This lineage can be traced back to the transcendentalist philosophy of Henry David Thoreau up through the “power of positive thinking” doctrine of New York minister Norman Vincent Peale, whose church Donald Trump attended as a child and who the president has described as an early influence on his worldview.

“Americans have been very aroused by the idea that there’s only a very thin tissue between mental experience and spiritual experience.” —Mitch Horowitz

“The belief is that you can reach the divine without any intermediary, that your mind alone is a kind of medium by which you can come into contact with some higher power or transcendental laws,” Horowitz says. “Americans have been very aroused by the idea that there’s only a very thin tissue between mental experience and spiritual experience.”

A pamphlet advertising Williamson’s early lectures at the society in 1984 describes “A Course in Miracles” in similar terms: “Based on 365 days of meditation exercises as well as a large text, the ‘Course’ is intended to be a pilgrimage wherein the student returns his awareness to his own internal guidance.”

Although Williamson hasn’t been in touch with the society in recent years, Horowitz says that Hall, the society’s eccentric founder who was still alive when Williamson was lecturing there, likely influenced her spiritual thinking and possibly informed her political ambition.

“Manly saw America as kind of a holy grail among nations, a repository of ancient and esoteric wisdom that promoted the ideas of the individual search, of liberty, of coexistence and religious toleration” he said. “He believed at its best, the country could be a light unto the world. There was this kind of patriotic mysticism that Manly worked into his talks and articles, and I have no doubt that she would have picked up on that.”

Despite her best efforts to awaken America’s collective spiritual consciousness, Williamson remains a serious long-shot in the 2020 race and appears unlikely to make the next round of debates. But that doesn’t mean you can’t visit the Philosophical Research Society to embark on your own personal search for higher wisdom.

“Our mission is to value seekers wherever they are on whatever path they’re on, as long as they’re open and compassionate,” Salyer says.

The post In the ’80s, Marianne Williamson Taught a “Course in Miracles” in Los Feliz appeared first on Los Angeles Magazine.