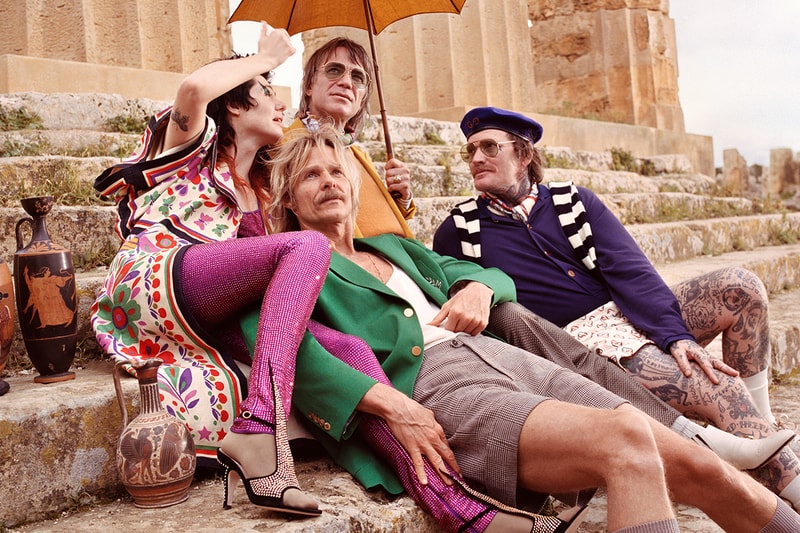 Gucci visits the ruined temples of the Selinunte Archaeological Park in Sicily for its Pre-Fall 2019 campaign. In the shoot, Venice Beach character types such as hardcore punks, rollerbladers, bodybuilders and surfers are captured against the backdrop of a 7th century BC ancient Greek city.

With Alessandro Michele‘s creative direction, Gucci explores cultural heritage through the juxtaposition of the collections retro theme, the campaigns setting and its models. Pieces from the Pre-Fall collection deliver a look synonymous with Gucci’s opulence, seeing velvet blazers, embellished tops and skirts and an array of bold patterned and monogrammed ’70s-inspired trousers.

The collection is shot in the surroundings of the Temple of Hera and sees the bohemian bunch gather after a banquet — true to the heritage of Selinunte — to play music, sport and dance together. In the campaign, Gucci continues the freedom and expression found in its SS19 campaign which saw another depiction of extravagance and luxury in an old Hollywood era-themed shoot.

The Pre-Fall 2019 campaign comes to life for Gucci’s app users, as the Italian atelier delivers an AR experience to customers’ phones. A digital photo booth will enable users to place themselves in the ruins of Selinunte and features behind-the-scenes footage and pictures from the campaign shoot. A discoverable story will also be available to Gucci app users when they are a Gucci store.

Take a look at the Gucci Pre-Fall 2019 campaign in the gallery above.

In case you missed it, Gucci recently dropped a black version of its $4500 USD Mickey Mouse bag.

A troupe of eclectic bohemians are pictured among the ruins of the temples of the Selinunte Archaeological Park in Sicily for the #GucciPreFall19 campaign. In this site dating back to the 7th century BC is @alessandro_michele’s contemporary take on the classical symposium—an after-banquet gathering with music and dancing, poetry recitals and long conversations. The campaign, captured by @_glen_luchford with art direction by @christophersimmonds features punk band @therealsurfbort, including Dani Miller @alienzarereal Alex Kilgore @exkilgore SS Powell @chaka_sean and David R Head Jr. @davidrheadjr. #AlessandroMichele