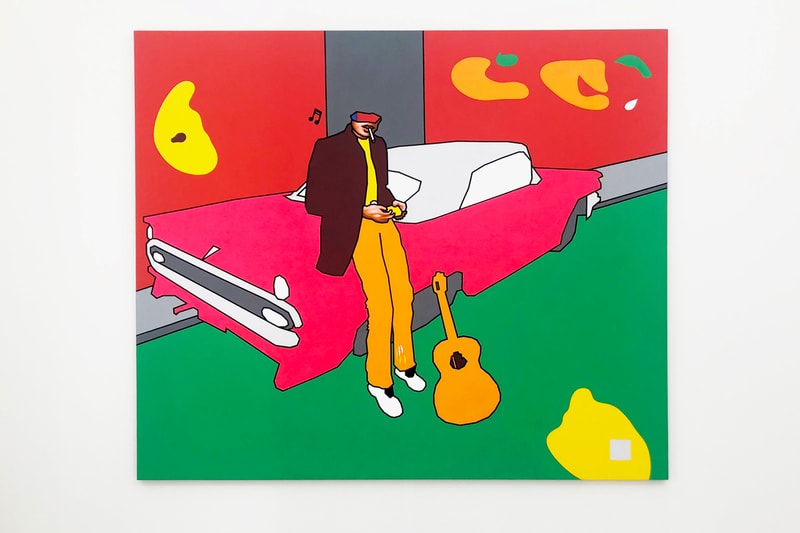 The first Frieze art fair in Los Angeles began with an identity crisis; many felt that Los Angeles’ fine art market was not strong enough to profit from such an event, particularly when compared to London or New York’s far larger pools of fine art collectors. And yet, on February 1, executive director of Frieze Los Angeles Bettina Korek announced that the internationally-recognized fair would come to LA for the first time on the third weekend in February, sandwiched between the Grammys and the Oscars.

As a longstanding participant in the LA art scene, I began to ask certain questions: what would Frieze’s relationship be to the existing art fairs in Los Angeles? What measures would Frieze take to successfully establish themselves in the LA art market, one where many have failed? Is Frieze LA a confirmation that the city, with its rapid urban development and foreign implants, is becoming another New York? And lastly, would this art fair embrace the city’s identity as a bridge between the art and entertainment industries?

In the Otis Report, Korek acknowledged the various art communities in LA’s horizontal landscape, which are defined by commercial tiers, art schools, and cultural histories. The first, perhaps most accessible, of the commercial tiers is the artist-run space — intimate, DIY spaces that encourage unique viewing experiences, resourcefulness, and a sharing community. The second is the gallery community, which takes inspiration from artist-run spaces, albeit with less freedom of experimentation and a greater interest in art school credentials. The third, most elite, is the museum tier, inhabited by “old money” patrons and filled with artists with international recognition, most of whom are approaching the retrospective period of their careers. How would Frieze integrate all of these communities into its art fair? After attending Frieze LA this past weekend, it was clear that the fair was separated into three facets. The first was the conventional art fair structure with large tents representing galleries and artists from around the world. The second utilized a Paramount Studios backlot of a New York City block, complete with commercial booths and stands representing important local eateries and book stores found in various LA art communities. The lot also had an area for artists commissioned by Frieze, to create installations and performances as an homage to LA’s artist-run spaces. The last section came in the form of panel discussions and film screenings, a welcome break for those wanting to escape the art and personalities that filled the gallery tent. The layout allowed for a little something for everyone, whether it was viewing works in the gallery tent, taking in the more experimental exhibitions in the backlot, or joining in the panel discussions and film screenings. Altogether, Frieze LA represented the marriage of fine art buyers fair with an artist-backed project. An art fair, in the commercial sense, with the intention to make money and expose their gallery amongst buyers.

But, a successful inauguration isn’t enough to sustain art fairs in LA’s competitive market. For the past five years, Art Los Angeles Contemporary (ALAC), located at the Barker Hangar at the Santa Monica Airport, has been LA’s most prestigious art fair. The location allowed for easy connection to the old money and large galleries on Los Angeles’ westside. However, in recent years, the major galleries have been slowly migrating east, giving ALAC a stuffy feeling. To make matters worse, in 2014 Paramount Ranch ran its art fair simultaneously with ALAC’s. Paramount’s fair installed galleries on an “Old West” movie set owned by Paramount Pictures and was strongly embraced by the Los Angeles’ art community, who almost universally abandoned the ALAC art fair.

In its second year, Paramount Ranch Art Fair gained more hype from not only from local artists, but also the international galleries and artists that usually come to town for ALAC. The third and final year was as huge as Paul McCarthy’s Butt Plug inflatable outdoor sculpture. However, the energy by then had shifted from a community-driven effort to a commercial enterprise that catered tourists. That change led to Paramount Ranch’s demise, as the art fair had become precisely the thing it critiqued. The LA collector base is smaller and newer than its east coast counterpart.

Paramount Ranch has since been described as a project and not an art fair. This art project and its experimental nature spoke to the reception of the Los Angeles art community more than the conventional form of art fairs as such as ALAC. The LA collector base is smaller and newer than its east coast counterpart. Even for the average visitor, the art experiences are unmatched. It’s almost inevitable that every tourist will visit the Met while in New York. But in Los Angeles, neither LACMA nor any other art institution rank quite so high.

The collector base-size problem can change with public perception of the contemporary art museum as a staple in Los Angeles life as a local and a tourist. Unlike what was felt as tension between ALAC and Paramount Ranch, Frieze LA is embracing other art fairs such as ALAC, as well as new art fairs such as Spring Break Art Show and Felix LA that have emerged with the major attraction of Frieze LA vis-à-vis experiments in unconventional spaces.

To stage a successful art fair in Los Angeles, you have to appeal to the surrounding entertainment industry and not fight it. To help with this, Frieze LA tapped leading production expert Endeavor marketing, to make their art presentations more entertainment-inclined. It was also no coincidence that Frieze fell between the Grammy and Oscar weekends. Frieze played to the industry’s schedule, while also participating in the business side of entertainment. Hosting the art fair at Paramount Studios not only made logistical sense but was also the bridge between two international staple award shows in music and film. In the vein of entertainment, the social aspect of the fair was in the cliché of a Los Angeles red carpet. The hallways of the Frieze LA gallery tent were a photo opportunity, offering a chance for Los Angeles’ wealthiest to compete for press. Frieze LA fuses the experimental and collective identity of the local art community while also harnessing the tradition of the commercial aspect of art fairs.

Los Angeles is the entertainment capital of the world. Frieze used the entertainment history of the city to bridge the artist-run space community as well as the commercial gallery and museum community. Visual fine arts relationship with entertainment has been clear as a collaborator, but with the first Frieze LA art fair, they have become one. Frieze LA fuses the experimental and collective identity of the local art community while also harnessing the tradition of the commercial aspect of art fairs.

Nikkolos Mohammed is a co-founder of the LA-based art nonprofit organization, DREAMHAUS. After graduating from Otis College of Art and Design, he began working for Los Angeles World Airports in the Arts and Exhibitions program; assisting with the organization’s archive of artworks and documentation of exhibitions. Currently, he is working as the lab technician for the printmaking lab at Otis College of Art and Design and continuing to build the DREAMHAUS organization.