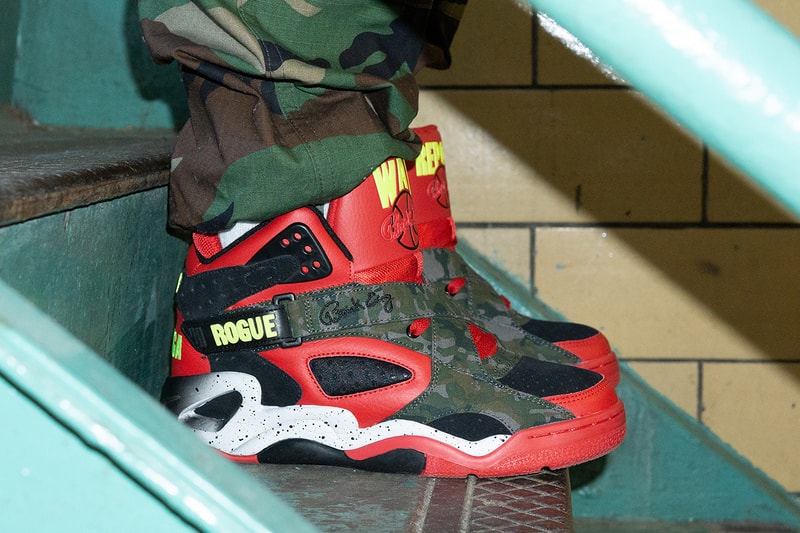 Ewing Athletics has partnered with the Queens rap duo Capone-N-Noreaga for the release of the Ewing War Report Rogue. The sneaker pays homage to the rappers’ 1997 debut album The War Report.

The album was quickly listed in 1997’s Hip Hop/R&B Top Five and cemented the duo firmly in New York’s music history — a legacy which has previously lead to collaborations with the likes of Supreme in 2016.

The collaborative Rogue sneaker sees a predominantly red leather upper get covered with black mesh and suede overlays and a camouflaged strap system. The colorway draws its inspiration from The War Report‘s album artwork and features bold neon wording from the iconic album cover on the tongues and heels of the shoe.

A neon green grenade-themed lace lock is placed below the camouflaged vamp overlay and the sole gets treated to a speckled, black-to-white paint gradient effect. Ewing Athletics is also releasing a highly-limited run of Friends and Family pairs, which feature a desert camouflage theme instead of the general releases khaki camo look.

The Ewing War Report Rogue will release in very limited numbers on June 11 exclusively at EwingAthletics.com for $140 USD. Capone and N.O.R.E will be at SOB’s in New York to meet fans and sign shoes on the same day from 8 PM.

For more music-inspired footwear, take a look at the upcoming The Who x Dr. Martens FW19 collection.