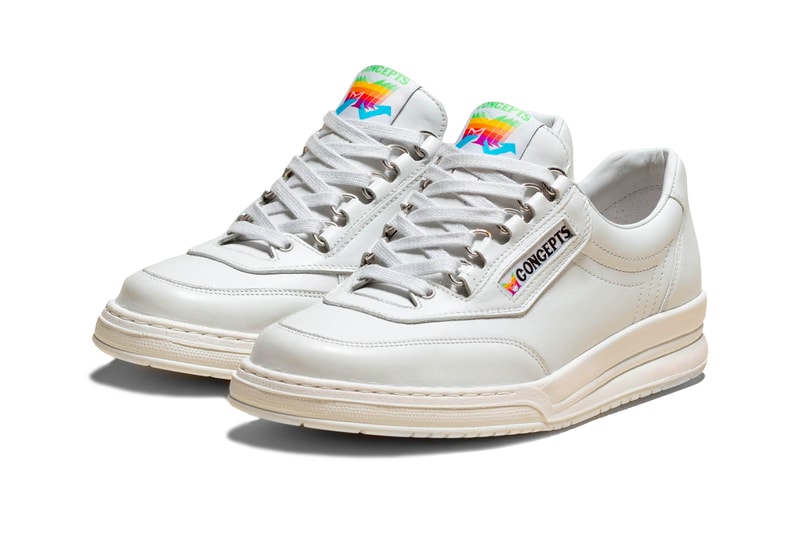 Concepts and Parisian footwear designer and manufacturer Mephisto are bringing a cultural icon back. The two parties have linked to reintroduce the Apple sneaker, the prolific shoe that has evaded fans for nearly two decades that was seen on the tech titan’s employees throughout the ’80s and ’90s. Originally never leaving the prototype stage, the original sneaker was only given to a select few of those working for Apple, becoming so sought after in the current market that a couple of DS pairs recently went for a starting bid of $30,000 USD. But now, a twist on the iconic piece of memorabilia is returning in the form of the Concepts x Mephisto “Apple” Sneaker.

Resembling much of the same color layout and design of the original sneaker, which shared much of Reebok’s footwear characteristics of the era, the new iteration has been given a premium twist. The upper is made of high-quality leather, incorporating superior craftsmanship and other materials throughout. A white bulky midsole meets the upper, with various rainbow hits marking the same spots as the original pairs that replicate the decade’s definitive advertisements.

In no way is the shoe actually associated with the original sneaker, taking on the streetwear ethos that has managed to turn iconic notions on their head, flipping them to cater to kids of the ‘80s and ‘90s, while still holding a symbolic relevance to the iconic original.

You can check out the Concepts x Mephisto “Apple” Sneaker above. The initial, extremely limited release will be occurring on April 19 via Concept’s NYC flagship and web store for $390 USD.

In case you missed it, Pusha T recently revealed his upcoming adidas collaboration at Coachella.

Concepts comes together with elusive Parisian luxury walking shoe stalwart Mephisto for our second collaborative project. Revisiting the classic Match model, we pay homage to the early days of personal computing. Sizes 7-12, 13 will be available Friday, April 19, 2019 in our New York location and CNCPTS.COM at 11:00AM (EST) for $390