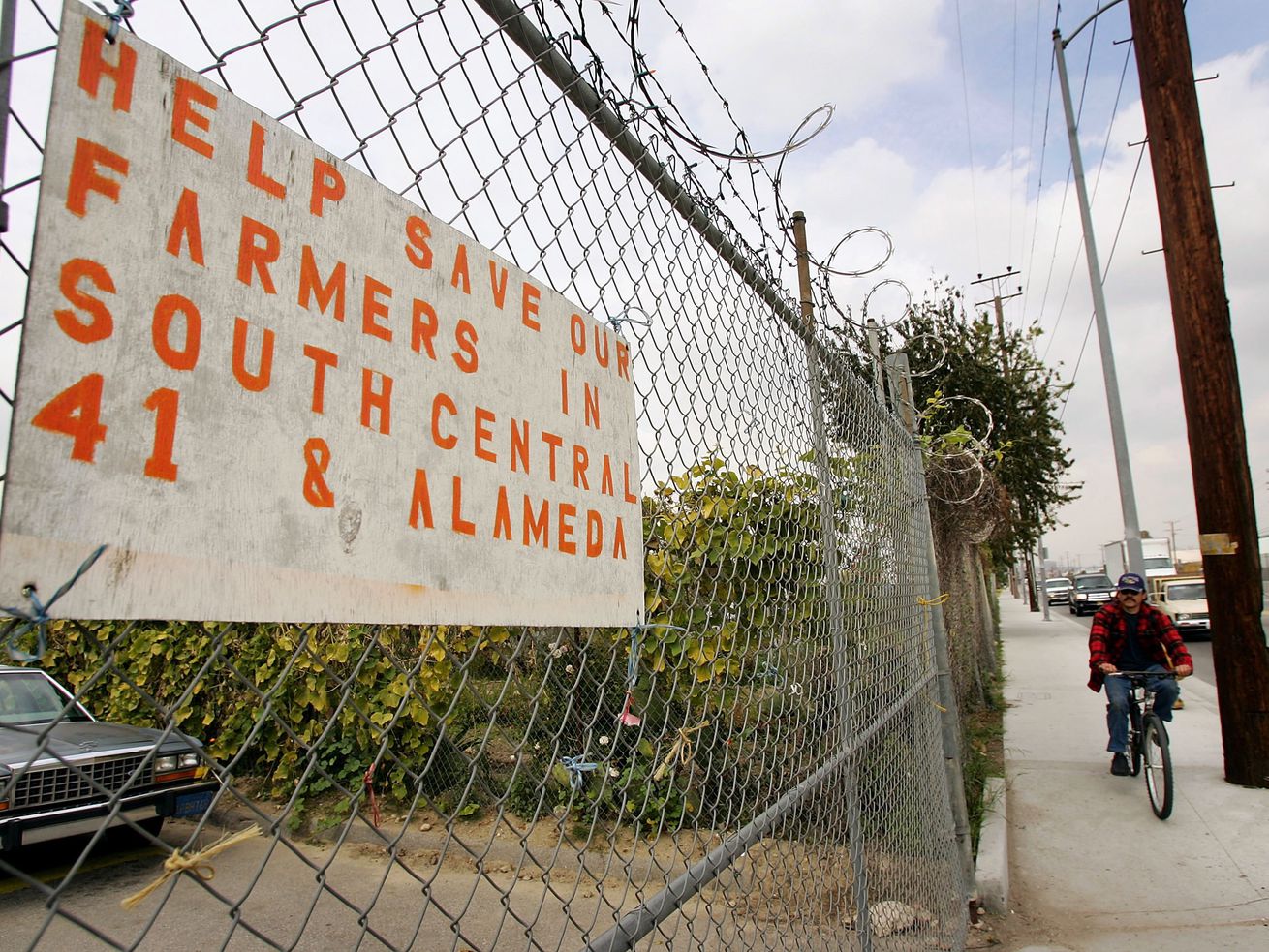 The neighborhood council had hoped to revive the farm to bring back “organic food, clean air, green jobs, and park equity”

A city committee re-approved Tuesday an environmental analysis of a development that would rise on a 13-acre site on Alameda Street near 38th Street that for 14 years was used a community farm.

The property owner, PIMA Alameda Partners, has worked for seven years to develop the site with four garment manufacturing warehouses. But for the last 13 years, a group of farmers evicted from the land and their supporters have fought to get the property back.

In a letter to the city Tuesday, the Central Alameda Neighborhood Council said the PIMA development would only make air quality and diesel traffic in its community worse. It had supported restoring the farm to the site “to help bring organic food, clean air, green jobs, and park equity” to the neighborhood.

But a representative for PIMA sot down any hope of the site becoming a garden again.

“The merits of this project… are not before us today and different uses for the site are not germane to the matter at hand,” attorney Francis Park, who represents PIMA, told the planning and land use management committee on Tuesday.

The environmental analysis now heads to the full City Council for final approval. It will be the final planning hurdle for the developer to meet before the project can get underway.

It’s needed after a court ruling invalidated a component of the development’s environmental analysis. The ruling stemmed from a lawsuit filed in 2017 by the farmers and the South Central Farm Restoration Committee against the city and PIMA.

The farmers’ lawsuit accused the city of violating the California Environmental Quality Act when it approved the proposed development.

Ultimately, Los Angeles Superior Court Judge James Chalfant found that while all other parts of the environmental analysis were accurate, it failed to adequately account for the cumulative traffic effects the project would have on the neighborhood. In 2018, Chalfant determined that the city would have to redo this part of the environmental analysis.

But city officials also saw the ruling as favorable. “Today the city prevailed on all but one ground and we believe we can easily comply with the court’s direction on the one remaining issue,” a spokesperson for the City Attorney told the Los Angeles Times last year.

The farm site has long been a divisive parcel. In the late 1980s, the city used eminent domain to take the property from then-owner Ralph Horowitz, intending to build a trash incinerator. The community rose up in opposition, eventually defeating the proposal.

After the LA Riots in 1992, the property became an urban farm and remained one until 2006, after a years-long battle between Horowitz and the farmers in which the city attempted unsuccessfully to broker a deal that would keep the farm open, the Times reported.