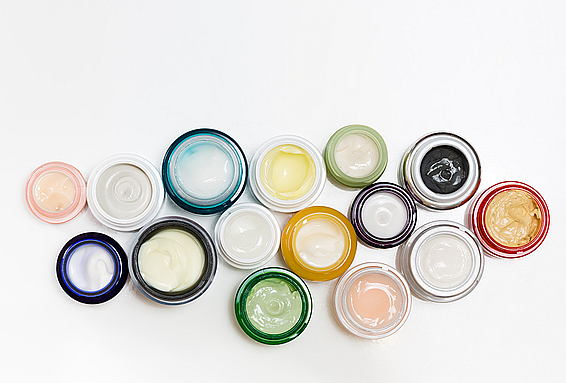 Jennifer Aniston uses CBD to calm her nerves, Dakota Johnson keeps it in
her carry-on to get good sleep on long flights
and Mandy Moore rubs it on her feet before
walking a red carpet. It’s the three little letters
that have disrupted the skin-care and wellness
arenas with no sign of slowing down—the
market is projected to reach $22 billion in
2022. “We are on the cutting-edge of a whole
new science, biochemistry and industry,” says
San Diego dermatologist Jeanette Jacknin, MD.
“This is just the beginning.

CBD (or cannabidiol) comes from the cannabis
plant (sativa or indica), which contains more
than 130 different compounds known as cannabinoids. To break it down, we like to think
of the cannabis plant as a parent company,
and within that company there are two separate brands: hemp, which contains less than
0.3 percent THC, and marijuana, which contains more than 0.3 percent. The hemp brand
creates CBD and hemp seed oil, which are
two distinct compounds (more on this later),
but both are non-intoxicating. The marijuana
brand creates THC—the psychoactive element
associated with getting high—but also CBD,
although it isn’t as potent.

You May Also Like: This CBD Serum Just Launched at Sephora and We Are SOLD

“First isolated from cannabis in 1940 by
Roger Adams, the structure of CBD was not
completely understood until 1963,” says Dr.
Jacknin. “Early studies resulted in the accepted
view that THC was the ‘active’ principle of
cannabis, and research then focused primarily
on it, to the virtual exclusion of CBD. This was
no doubt due to the belief that activity meant
psychoactivity that was shown by THC and
not CBD. In retrospect, this was unfortunate because a number of actions of CBD with
potential therapeutic benefit—largely the
ease of joint and muscle pain, but also anxiety
relief and sleep support, among others—were
downplayed for many years.”

However, as David S. Younger, MD, New
York neurologist and author of The Science of
Medical Cannabis, notes, the study of THC
has led to many groundbreaking discoveries,
including that of the human endocannabinoid
system, which “has emerged as one of the key
regulatory mechanisms in the brain, controlling
things like mood, pain perception, learning
and memory.”

Our bodies actually make our very own
receptors for cannabinoids, known as CB1
and CB2, and when we ingest CBD or THC,
it targets one or the other. “CB1 receptors
are present throughout the central nervous
system, which is why THC does its thing
when smoked or eaten, but CBD selectively
targets CB2 receptors, which inhabit the
immune system, making it a favorable option
for wound healing and managing inflammation,” explains Adam Friedman, MD, professor
and chair of dermatology at George Washington
School of Medicine and Health Sciences.

It’s these benefits that first caught the attention of doctors and wellness aficionados, and
eventually, skin-care experts, too. But, as the
experts interviewed for this story unanimously
stressed, not all CBD is created equal.

Given the popularity of CBD, it seems like
everyone wants a piece of the plant-based pie.
Whether we’re at Ulta, a SoulCycle class, a
spa, or even some doctors’ offices, CBD-infused
products are most likely within reach—or will be in the near future. As a result, there’s abundant confusion as to which products actually
contain the ingredient and which don’t.

“Many skin-care brands are formulating
products with hemp seed oil—aka cannabis
sativa seed oil—which contains zero CBD
and comes from the seeds of the plant versus
the flowers, stems and stalk, where CBD is
sourced. Many people are confused and
think it’s the same thing as CBD or contains
CBD, but there’s a significant difference,” says
Lord Jones cofounder and president Cindy
Capobianco. Although hemp seed oil is high
in antioxidants and fatty acids that plump
and protect skin, CBD trumps it on both
fronts, and is also touted as an acne fighter—
it helps reduce sebum production in the
skin—and an over-the-counter solution for eczema, rosacea and psoriasis (clinical trials
for these uses are pending).

“Multiple OTC hemp brands have received
warning letters from the FDA because their
products had little to no CBD in them,” says
Dr. Friedman. “Furthermore, these companies
have to be very cautious with their claims—if
anything sounds remotely medical, meaning
intended for use in the diagnosis, mitigation,
cure, treatment, or prevention of disease, then
their product would be considered a drug, and
that is a big infraction.”

Another hurdle for many topical CBD pain
relievers, Dr. Friedman notes, is that they
contain other scientifically proven analgesic
compounds, such as menthol, camphor and
capsaicin, so it’s tough to determine which
ingredient is doing the heavy lifting.

Topicals
What they are: Oils, lotions, serums, creams, salves
and sprays that are applied to the skin

Other benefits: CBD potions are being used in dozens
of ways: on joints and muscles to ease stiffness, the temples
to address pain associated with migraines, the abdomen to
soothe menstrual cramps, and the feet before a long night
in stilettos. “We’ve also heard cases where it’s been applied
prior to in-office aesthetic treatments like fillers and lasers
to help minimize discomfort during the procedure and
any bruising or swelling afterward,” adds Capobianco.
Dr. Friedman says there is definitely potential for this use
to become mainstream, but more clinical evidence and
regulation is needed first.

Good to know: Most CBD topicals can’t penetrate
into the bloodstream, unless they are designed to be
transdermal or are applied to areas of the body that are
more porous (such as mucous membranes).

Ingestibles
What they are: Tinctures, capsules, gummies,
powders, drinks, etc. that, like other dietary supplements, are not regulated by the FDA. Tinctures—
CBD-infused liquids (mainly oils) that get dispensed
via dropper under the tongue—are the most common
and quickly absorb into the bloodstream. Candies
and capsules need to be processed through the digestive tract, so their effects may take longer to manifest.

What they’re best for: Promoting restful
sleep, as well as easing stress and anxiety issues, and
symptoms associated with autoimmune disorders
like multiple sclerosis and rheumatoid arthritis

Other benefits: CBD ingestibles may also offer
a natural treatment for some types of chronic pain.
“In preclinical trials, CBD was found to reduce the
body’s inflammatory response in those with autoimmune conditions,” says Dr. Younger. Researchers are
also studying its effects on depression, type 1 diabetes,
Parkinson’s, Huntington’s, Alzheimer’s, and schizophrenia, among other disorders.