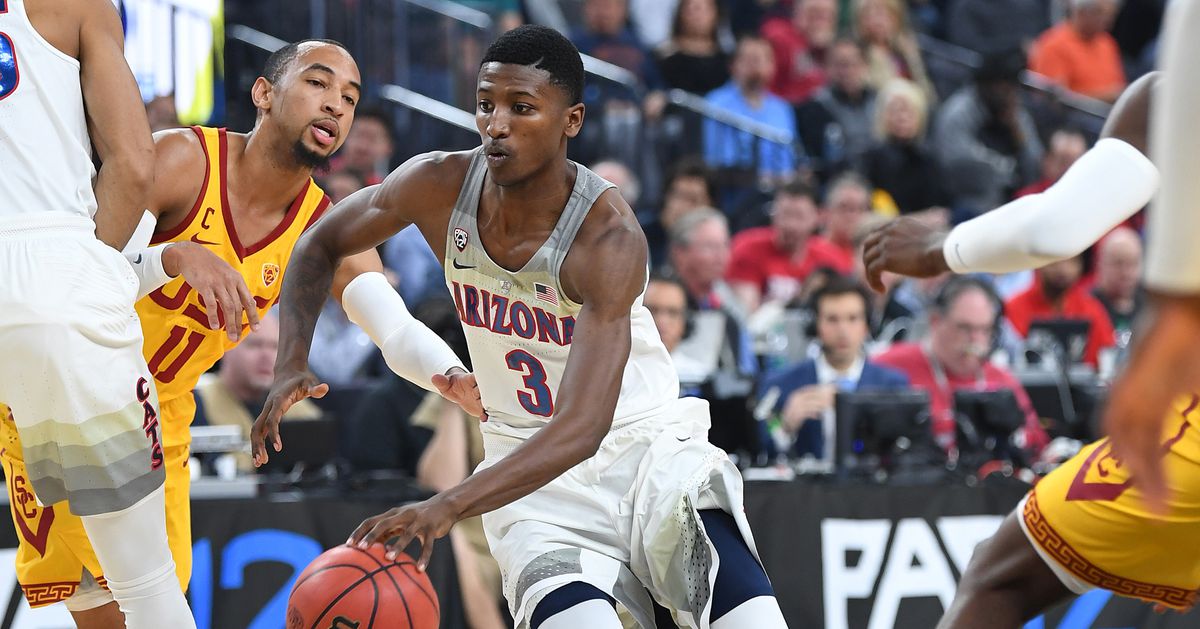 The USC Trojans will host the Arizona Wildcats on Thursday in Los Angeles as both look for their second consecutive win.

Tip-off at the Galen Center is set for 7 p.m. MST on FOX Sports 1. Here are some things we will be keeping an eye on in the contest.

Chase Jeter’s status is questionable for this game, as the UA big is still on the mend from the back injury he suffered Saturday against Oregon State.

Traditional back-to-the-basket big men might be a dying breed in today’s game, but USC has one that can punish the Wildcats if they have to play without their starting center.

7-footer Nick Rakocevic has greatly improved as a junior, averaging 15.2 points and 9.7 rebounds a game, getting to the free-throw line more than five times a night.

The Trojans also boast 6-foot-9 senior Bennie Boatwright, who’s averaging a team-high 17.3 points per game, scoring with great efficiency at all three levels of the court.

“The thing that’s really tough to deal with with ‘SC is Rakocevic and Boatwright both can score around the basket, both are excellent passers,” UA coach Sean Miller said. “Andy (Enfield) does an amazing job of getting them the ball in the right position. They’re both very mobile as well, but Benny Boatwright can score the ball from anywhere. So not only can he hurt you around the basket, but he can step away and shoot 3s.”

What stands about Rakocevic, Miller said, is how coordinated he is. The big man is averaging almost four offensive rebounds per game since the start of conference play.

“He’s got great hands, he can catch the ball in traffic,” Miller said. “He’s not just a back-to-the-basket player. He’s really mobile. He can score facing the rim. … Other than the guy from Baylor (Tristan Clark), I don’t know if we played against anybody that we would put in his category.”

If Jeter is unavailable, it will be a tall task for guys like Ryan Luther, Ira Lee and Dylan Smith to slow down USC’s frontcourt tandem and keep them off the glass.

USC has been without one of its best players, Kevin Porter Jr., virtually all season. The 6-foot-6 freshman missed nine games early in the year due to a bruised thigh, then returned for USC’s road game at Oregon State on Jan. 10, only to be suspended indefinitely before the Trojans’ Jan. 13 game against Oregon for “conduct issues.”

No one is sure when or if Porter will return this season, but Arizona still has to be ready for him nonetheless. The former five-star recruit was the No. 4 shooting guard in the 2018 recruiting class and projects as an NBA lottery pick.

In the seven games Porter has appeared in, he averaged 10.7 points on 51 percent shooting.

“He’s a really talented player,” Miller said. “We know he can score in bunches. He can do it driving the ball, he can do it especially in transition and we’re just aware of him. There’s not a lot you can do. We always look at those guys that if there’s a chance that they can play, we assume that they’re going to play.”

3-point shooting has been a weakness for the Wildcats this season.

That is, until Pac-12 play started.

Arizona is converting a blistering 39.7 percent of its 3s in conference play, a mark that would rank 10th in the country if extrapolated to the entire season.

Here are Arizona’s best 3-point shooters in conference play so far. Brandon Williams and Dylan Smith have experienced the most improvement:

“The one thing about a zone defense is each of the zone defenders is assigned an area, and sometimes us positioning one of our drivers or a smaller player in that area gives us an advantage, and now we have to make good decisions,” he said.

“When we drive it, good things have to happen. A lot of times it’s a clever pass, but you don’t want to just be a pass-and-catch team and shoot 3s. Our 3s will have to be off of penetration. We want to drive the ball and that’s more of an emphasis now than ever because of the way our team is. It’s actually something I wish I would have emphasized even more in the past, but we’re here now and that’s very, very important to our offense.”

One player not mentioned above is Brandon Randolph, whose shooting has been up-and-down since the start of conference play and, really, all season. The sophomore is shooting 33.3 percent from 3, while taking the most attempts on the team (90).

Randolph was 1 for 8 from 3 against the Oregon schools last weekend, but 6 for 9 against the Bay Area schools. Before that he was 2 for 11 against the Rocky Mountain schools.

To combat that streakiness, Randolph is focused on making an impact in other areas of the game.

His rebounding has experienced an uptick recently, averaging 4.3 per game since the start of Pac-12 play. While Randolph only had 10 points on 15 shots in the win over Oregon State, he had five rebounds, four assists and two steals.

“That’s a big improvement, especially this year versus last year,” he said. “I’m just trying to become a better defender and I’m trying to improve as a player overall. Scoring isn’t everything, so I gotta do other things as well.”

Randolph also acknowledged that he tends to be more aggressive in the second half of games. The Beavers held him scoreless in the first half Saturday before he broke out for 10 second-half points.

“I just have to feel out the game, kind of their see their defensive schemes, so that’s just me,” he said.

Vegas oddsmakers lists Arizona-USC as a pick ‘em game while KenPom gives Arizona a 54 percent chance of winning, though both figures would certainly change if Jeter and/or Porter are ruled out.

The L.A. series is always special for Arizona, which usually has a roster chock full of Southern California kids.

This year is no exception, with Brandon Williams, Ira Lee and Devonaire Doutrive making their first trip back to Los Angeles as college players.

That can be a good and bad thing. Good because it gives those players an extra boost of energy, knowing their friends and family are watching from the stands. Bad because sometimes they can be a little too amped for their own good.

“I can remember Coach (Lute) Olson talking to me a lot about that when I first came here,” Miller said.

This L.A. trip has been the most challenging for Arizona during Miller’s tenure, compiling a 6-8 road record against USC and UCLA.

Arizona needs to avoid a sweep in Los Angeles to remain near the tippy-top of the conference standings. Obviously escaping SoCal with two wins would be sweet for NCAA Tournament purposes, but a split on this trip would be acceptable as well.

USC has had an uninspiring season thus far, but a strong homestand against the Arizona schools can propel it back into the Pac-12 title conversation. However, a poor showing could make their already-bleak chances even drearier, especially since the Trojans are at Washington next Wednesday.

Arizona’s defense is a step above

The Trojans have been slightly better than the Wildcats on offense this season, but their defense is significantly worse. Arizona ranks 21st in the country in adjusted defensive efficiency, per KenPom, while USC ranks 118th. Though obviously Arizona’s defense will look much different if Jeter sits out.