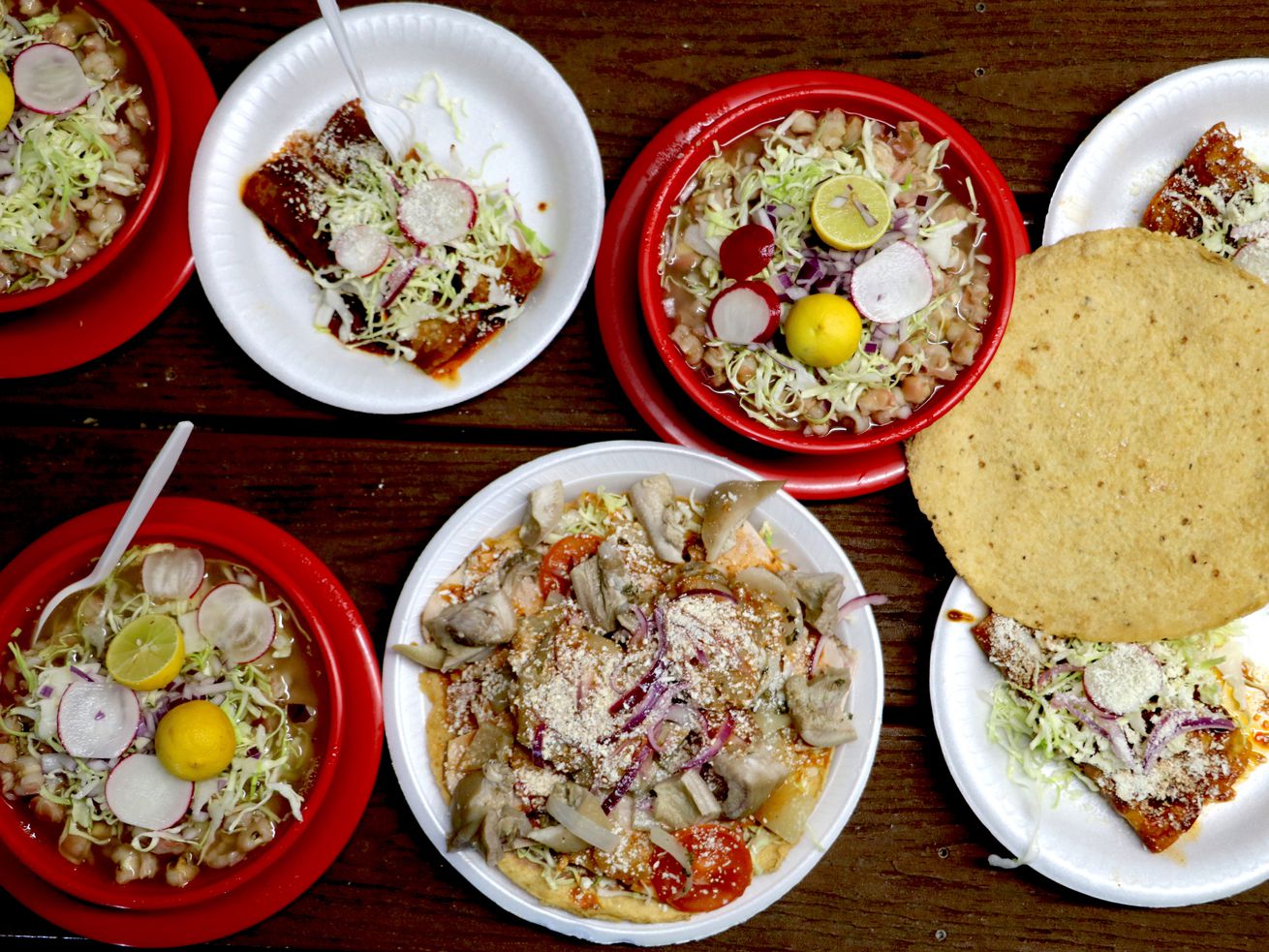 In northwestern Mexico, the scent of nixtamalized corn and toasted chiles, mingled with rich plumes of simmering stews and meats, waft into the evening air. Throughout the plazas, cobble stone streets, and arches, families and friends gather for a light supper of antojitos, or “little whims.” The family of garnachas, another broad name for Mexico’s crave-worthy street foods, are mostly maize based: tostadas, tortas, quesadillas, sopes, tamales, pozole, enchiladas, tacos, and much more.

In Zacatecas, it’s gorditas; in Aguascalientes, red pozole; and in Ciudad Guzmán, Jalisco, locals come out for tostadas raspadas (coarse tostadas) covered in pickled hog parts. They also come out for enchiladas with a sweet mole; flautas dressed with lettuce, cream, and queso seco (salty, dry cheese); and white pozole made with pork spine and nixtamalized corn. That’s what Fernando Gonzalez Zuniga grew up eating in casual sit down supper houses called cenadurias in what many call the Athens of Mexico, as many famous intellectuals were born in Ciudad Guzmán.

Gonzalez worked alongside chef Juan Mondragon at Juan’s Restaurante in Baldwin Park, which closed in 2014, was known for its wide selection of cactus dishes and pre-Hispanic fare. Gonzalez then spent several years as a corporate chef trainer for the Chili’s restaurant chain, opening new branches all over southern California. After a few years, the workload and demands increased but not the pay, and instead Classic Nachos, Mex Bowls, and Baby Back Ribs, he longed for a loaded tostada of pickled pig’s feet and skin, and cured pork loin from his hometown. So Gonzalez opened Antojitos Los Cuates Jaliscienses (translated as the homies from Jalisco), one of the most unique food trucks in Los Angeles. It’s a traditional cendaduría on wheels parked outside of a donut shop in Compton, uncompromising in its presentation of Ciudad Guzmán cuisine. And it so happens that Gonzalez also offers one of the two best pozoles in Los Angeles (the other comes from Tamales Elena, just down the road in Watts).

“This is nixtamalized maize,” says Gonzalez proudly, as he delivers heaping bowls of stew packed with opened stars of al dente hominy in a flavorful pork spine broth dressed with shredded lettuce, red onion, and a few slices of radish. Provincial pozoles like this have rarely existed in LA. Usually they are non-regional types made with canned hominy or quick stocks. Gonzalez produces an original product with his own nixtamalized hominy and a deeply flavored stock from a long cook time. In Mexico, the states of Guerrero, Jalisco, and Aguascalientes take extra care with pozole, as it is a staple meal in these parts for supper, or la cena. For aficionados, Los Cuates Jaliscienses is the only place in the city to get pozole on this level on a regular basis.

The enchiladas come in a lightly sweet mole, similar to the enchiladas dulces found in the neighboring state of Colima. When asked what kind of mole this was, Gonzalez just shrugged and said, “the one my mom makes.” This is as much a statement about the origins of Mexican gastronomy as it is a lesson on the vast world of moles.

The classic dishes served at the truck — flautas, tacos dorados and sopes — are plated with care, layered with shredded lettuce, tomatoes, diced red onions, Mexican cream, and queso seco from Ciudad Guzmán. The plates are as refined as any famed cenaduria in Jalisco. There are a few bona fide cenadurías in LA, but none like Los Cuates.

The culture of Jalisco is the Mexico best known in the United States. Son tapatío (Jalisco-style mariachi) is the most famous music from Mexico. Tequila production is based here (the U.S. consumes as much as 75% of all tequila produced). Mariachis in Boyle Heights are a common sight, but eating a tostada at Los Cuates is like hearing Mariachi Vargas in the Degollado Theatre for the first time. The sharp brass, resonant strings, pulsating guitarròn, throaty tenor, and alto voices blend on the stage, analogous to all the contrasts on a tostada mixta from Los Cuates.

First, the raspada itself is imported from Gonzalez’s hometown. It’s full of corn flavor and a rough texture, getting a thin spread of creamy, refried beans. Then come the housemade picklings — whole pig’s feet and pig’s skin amid cured squares of pork loin, followed by a thoughtful scattering of shredded lettuce, tomato, red onion, Mexican cream, and queso seco. The toppings are perfect their construction — they aren’t smothering the main dish to mask an inferior antojito, but instead add freshness, and a bit of sour and salty to enhance the beauty of each plate. Truly, it’s a symphony of flavors.

Ramiro Arvizu of La Casita Mexicana and Mexicano has known Gonzalez for around five years through his mother, who is a great cook. Arvizu was also taken back by Antojitos Los Cuates Jalisciences, saying “He’s [Fernando Gonzalez] presenting the essence of a cenaduría in a truck serving pozole, tostadas, sopes, and tacos. It’s food that’s done with an artisanal tradition.” Arvizu is a native of Jalisco, and there is no greater endorsement than the look on his face when he took his first bite of the tostada: “It’s just like back in Jalisco.”