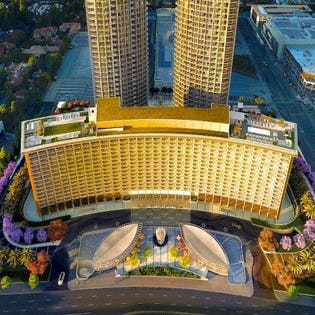 The end of the year is fast approaching, and it has been a busy one on the Los Angeles hotel scene. The city welcomed landmark new properties including the NoMad Los Angeles and the Hotel Figueroa downtown, the Kimpton La Peer in West Hollywood and the westdrift Manhattan Beach.

The year to come looks no less busy, with over a dozen new hotels set to debut throughout 2019. Here are seven of the most exciting.

L.A.-based hospitality group Palisociety has several upcoming openings to crow about, including a boutique eastside hotel called the Silver Lake Pool & Inn set to launch in the spring. Before that, though, they will be unveiling another new hotel in Culver City’s former West End Hotel. The building dates back to the 1920s, when it was a boarding house. The edifice, which will house just 49 rooms and suites, looks decidedly more elegant these days thanks to a refresh of its original Art Deco décor (with a few cinematic inflections, of course) and a new indoor-outdoor restaurant called Simonette. Expect stylized rooms with a flair described as “postwar Paris meets moderne Los Angeles,” plus amenities like custom-made bath products.

A Cosy room at the Hoxton.Hoxton Hotels

This understatedly hip mini-chain has already set up shop in metropolises including Amsterdam, London and Paris, among others. One of the next locations will be downtown Los Angeles. The hotel will take over the historic 10-story Los Angeles Railway Authority building on South Broadway, with 174 rooms. There will be four cheekily named room types including Snug for solo travelers, Cosy, Roomy and Biggy. Décor elements common to all will include chevron-style timber flooring, copper and brass details, marble bathrooms and tiled ceilings. Like the other iterations of Hoxton, count on the lobby to be the social hub of the hotel with a restaurant and bar for light bites and late-night libations. The L.A. location will be the site of the brand’s first rooftop pool, complete with loungers and a bar of its own.

Hollywood has plenty of action but few hotels. Luckily, one more stylish option is opening this spring in the form of the 220-room Godfrey. It will be located on Cahuenga Boulevard just a block south of Sunset Boulevard and adjacent to Arclight Cinemas and Amoeba Records, among other area anchors. The hotel will offer indoor-outdoor event spaces, a destination lobby bar and a casual steakhouse called About Last Knife. Of course, it wouldn’t be an L.A. hotel without a rooftop pool and bar, so it’s got those as well up on the seventh floor. Rooms promise ultra-fast Wi-Fi, 55-inch televisions and Bose Bluetooth speakers among other techie toys.

The Proper will open in a historic YWCA.Proper Hotels

Another upstart mini-chain whose first location in San Francisco opened last year and with future properties planned for Santa Monica and Austin, the Proper Hotel Downtown L.A. should be among the group’s next openings sometime toward the middle of the year. The 148-room hotel will take over the 13-story, red-brick YWCA building on Broadway, which originally opened in 1924. As with the other Proper locations, the décor will be overseen by designer du jour Kelly Wearstler, whose eye tends toward a whimsical midcentury-inspired look. Among the unique features of this particular property will be a screening room in the former basketball court and a library lounge with original ceiling frescoes. There will be two restaurants plus a rooftop pool with a bar.

Hyatt’s top-tier brand will make a splash in Los Angeles when it opens downtown later this year at the corner of Figueroa and W. 11th Streets. The Staples Center is just across the street from the planned 184-room hotel (including 34 suites). Guests can expect a state-of-the-art spa and wellness center, an outdoor pool and deck and a collection of carefully selected partner restaurants and retailers.

The Fairmont Century Plaza will bring new life to this landmark property.Fairmont

Fairmont is taking over the landmark Century Plaza Hotel, which first opened way back in 1966 on the former back lot of 20th Century Fox Studios and was most recently a Hyatt Regency. The new hotel will be housed in the recognizable, crescent-shaped 19-story tower originally designed by Minoru Yamasaki. It will have 400 rooms, a gourmet café, a brasserie serving American classics and a rooftop bar, among other amenities.

The Thompson brand is returning to Hollywood (it formerly managed the Roosevelt Hotel) with the planned opening of this new 11-story tower by architects Steinberg Hart and RVCA with 200 guestrooms decorated by London-based interior design firm Tara Bernerd & Partners. Details are still scant, but the hotel should include a huge ground-floor flagship restaurant, a rooftop entertainment deck with indoor-outdoor dining and a pool, plus stunning views of the Hollywood sign.

Those are just seven of the hotels slated to open in Los Angeles over the coming year, but expect more exciting news as 2019 gets underway.