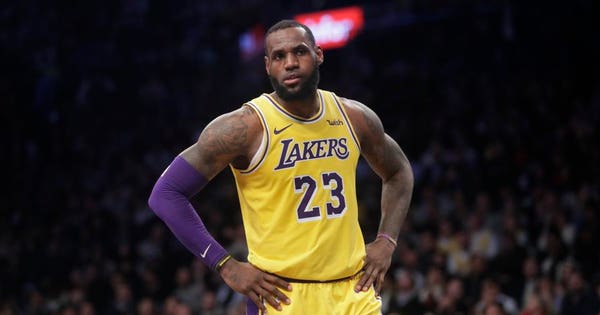 Had fire marshals been inspecting the visiting locker room inside Brooklyn’s Barclays Center on Tuesday night and seen the crammed, packed space filled with media and reporters watching LeBron James listen to NYC-based rap and stretch in preparation for the Lakers’ game against the Nets, they easily would’ve shut it down.

Camera crews were everywhere throughout that night, with reporters and photographers jostling for space to see James warm up, shoot, come out of the tunnel and onto the court. Sections of media seating had to be opened up that normally would only be used during the playoffs. This constant barrage of attention obviously isn’t new to LeBron, but combined with the obsessive, ravenous Los Angeles market and the Lakers’ fan base— the NBA’s glamour franchise— he’s taken the team and the city’s environment and ramped it up to levels we haven’t seen in at least several years.

From earlier, #Lakers about to head to the court. #LakeShow #NBATwitter pic.twitter.com/RFGxcQKO7A

For this feature, two current Lakers, one former Laker and two of their most plugged-in reporters discussed and put into context how things have changed for the team on and off the court since LeBron’s arrival in July.

If there’s anyone who knows about the cross-section between LeBron and L.A., it’s ESPN reporter Dave McMenamin. After covering the Lakers from 2009-2014, ESPN brought him to Cleveland to cover James and the Cavs during his four-season tenure there. And now he’s back in Los Angeles covering LeBron, having grown all too accustomed to packed locker rooms and frenzied media scrums.

The current Lakers ecosystem, McMenamin said, reminds him of the team’s championship years with Kobe Bryant and Pau Gasol.

“You had A-list celebrities, you had sellouts, you had energy in the crowd,” he said. “You had opposing players breaking out special edition kicks because they know this is a bigger stage and people are going to pay attention to that game more than other games. All those things are happening.”

“There’s a lot more media, for sure,” said Tania Ganguli, now in her third year covering the Lakers for the Los Angeles Times. ”You saw the locker room pregame how you could barely move around in there. It wasn’t like that as much in the past.”

Outlets have elected to send more beat writers to L.A. to cover the LeBron-led Lakers, to feed the market’s championship-hungry, star-driven appetite.

“There were a lot of shoot-arounds last year where there were just three of us there,” Ganguli said. “That doesn’t happen anymore.”

Lakers coach Luke Walton speaks to a throng of media before their game Tuesday against the Nets in Brooklyn.Photo by Shlomo Sprung

After a close loss to Brooklyn, Lakers guard Josh Hart said to just look around the team’s locker room, with James, Lonzo Ball, Kyle Kuzma and Tyson Chandler all being hounded with questions. Laker and league officials were looking at media members’ phones and cameras to ensure that only video was being taken in the locker room and not still photos, in accordance with league rules. That vigilant level of enforcement is something you almost never see in NBA locker rooms.

“You see it,” Hart said, imploring reporters to look around the room. “If we didn’t have him, half these people wouldn’t be here. I think that comes with the territory.”

Los Angeles Lakers guard Josh Hart (3) reacts after scoring a 3-point shot in the first half of an NBA basketball game against the Memphis Grizzlies on Saturday, Dec. 8, 2018, in Memphis, Tenn. (AP Photo/Brandon Dill)ASSOCIATED PRESS

Nets center Ed Davis played with the 2014-2015 Lakers that went 21-61, and the atmosphere to him was even crazy back then when the team was terrible.

“They take basketball serious there, and they have all the media there and they have a hell of a fan base,” Davis said. “You get reporters and then you get random people just in the locker room. And with LeBron, I just know it has to be on steroids.”

Though the Rams and Chargers are both having really good seasons, the Lakers are back as the biggest year-round story in the city, McMenamin said.

“You don’t quite see the Laker flags on the cars yet,” he said, but “to me the Lakers are clearly at the top of the pecking order again, and there is a ton of good will that the team has right now that maybe they didn’t have over the last several years.”

Ganguli agreed that there are a lot more eyes on the Lakers now than there used to be, even though the team had no problem filling up Staples Center even when they were losing.

“I will say there’s a lot more of a celebrity presence now,” she said. “Denzel Washington didn’t come to that many games last year. There’s a lot more A-list stars coming to Laker games now.”

There’s much more interest in the Lakers now that LeBron’s gone Hollywood, per Ganguli.

“It’s a more prestigious event than it was before,” she said.

“Wherever we go, all eyes on us,” he said. “I feel like we gotta embrace that and just keep playing our game, don’t worry about outside.”

Obviously when you have one of the best players in basketball history on your squad, expectations are raised. When LeBron first signed back in Cleveland in 2014, he said he’d be patient as the Cavs tried to build a championship level team, but “it really was a championship directive from the start,” McMenamin said.

But with the Golden State Warriors still in the midst of their dynasty and the Lakers’ roster far from championship level, nobody expects a title this year, according to McMenamin.

“I think that is allowing them to operate in this early part of the season with relatively low pressure,” he said, which has probably been helpful for the Lakers.

Outside of the early season drama involving owner Magic Johnson and head coach Luke Walton, “there hasn’t been a whole lot of negative press with the team,” McMenamin said. “That was not the case with Cleveland my first year.”

It all makes the stakes a little lower than normal in covering a LeBron-led team, but little did we know on Tuesday, McMenamin was about to publish a story on ESPN.com quoting James on how amazing it would be if the Lakers acquired New Orleans Pelicans All-Star Anthony Davis.

“That lurking story just beneath the surface,” McMenamin said, knowing he had this LeBron quote in his pocket, “is what they’re gonna do to become a championship contender.”

It sure seems like the honeymoon phase is coming to an end for LeBron in L.A., and the title-or-bust mindset is slowly seeping into Tinseltown. With the LeBron-fueled media attention combined with the Los Angeles market and the Lakers fan base, expect the LeBron ecosystem to become even more frenzied and chaotic as time progresses.