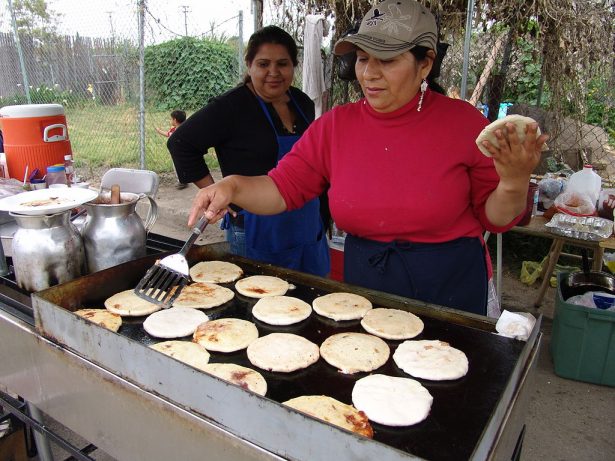 Street vending was legalized in Los Angeles on Jan. 1, marking an important victory for economic and immigrant justice in the city. This comes after statewide decriminalization through the Safe Sidewalk Vending Act, or SB946, signed into law in September 2018 by Gov. Jerry Brown. SB946 limits violations and fines imposed on vendors and is a turning point in the fight to protect many migrant families from Trump-era deportations.

These achievements at the state and local level were won through a hard-fought campaign led by sidewalk vendors — in partnership with Los Angeles Street Vending Coalition, or LASVC, and other allies — that began more than 10 years ago. These victories should be recognized and celebrated, but the work to safeguard street vending in our society is just beginning.

While California has the largest economy in the United States — and the fifth largest in the world — it also has the highest poverty rate of any state. One path out of this poverty, especially for the immigrant community, has been through street vending.

There are over 50,000 street vendors currently operating in Los Angeles alone and these micro-enterprises represent a $504 million industry. Around 75 percent sell clothing, accessories and other merchandise and some 10,000 sell food. The majority of vendors identify as Latinx, 80 percent are women of color and a majority are seniors.

Street vending became prevalent in Los Angeles after the enactment of the United States Refugee Act of 1980. This act granted asylum to hundreds of thousands of Central American refugees, many of whom settled in Los Angeles and became the majority of the city’s street vendors. The act’s passage coincided with a massive loss of manufacturing jobs in Los Angeles, which resulted in a jobs crisis for communities of color, especially migrant families.

As the number of street vendors rose, many storefront owners became hostile and resisted the thousands of vendors in their neighborhoods. These businesses have a history of calling the police, who enforce prohibition on vendors through increased surveillance, fines, arrest and potential jail time. Criminalized by the city, street vendors could be charged with a misdemeanor, punishable with up to six months in jail and up to a $1,000 fine, the confiscation/destruction of their property and potential deportation.

For 10 years vendors and community partners have been strategically organizing to create a permit system that protects the rights of local entrepreneurs and legalizes their work. The campaign emphasized forming partnerships between privately-owned brick-and-mortar stores and street vendors operating in the vicinity. Carlos Perez, founder of Un Solo Sol, a community kitchen in the neighborhood of Boyle Heights, and a coalition member, powerfully stresses that storefront and street vending are part of the same economic ecosystem.

In 2008, a group of street vendors in Boyle Heights were facing increased harassment by the police, who were issuing tickets, fines and confiscating personal property. This eventually led to the police shutting down their vibrant sidewalk market. In response, the vendors began to organize in partnership with the East L.A. Community Corporation, or ELACC. They began reaching out to community leaders and together initiated popular educational meetings and seminars, galvanizing vendors to organize around the framework that centered the human right to vend in the city.

During monthly organizing committee meetings across the city, women vendors steered the coalition. Together they organized press conferences, protests, art builds and acts of civil disobedience at key marches and rallies in the city, including on May Day and International Women’s Day.

A community forum on the state of street vending was organized that led to the official launch of LASVC, a coalition made of more than 60 community organizations, small business owners, local councils and activists, in 2012. In 2013, councilmembers were moved by the group’s impactful grassroots efforts and introduced a motion to speak about a permitting process.

Over the next few years, the community forum model was expanded and structured around zones representing other parts of Los Angeles with large street vending communities, including Boyle Heights, Highland Park, Pacoima and Leimert Park. Each zone had core leaders that received special training to mobilize their fellow co-workers to join the campaign and participate in organizing monthly meetings and forums. These active vendor leaders became the ultimate drafters of the policy proposed to the city council for legalization.

The focus of these ongoing forums was to uplift the stories and voices of vendors, their families and community members who rely on their services. Traditional and contemporary art were embraced to communicate campaign goals and advance demands. This included screen printing solidarity shirts and aprons saying “Legalize Street Vending” to be worn by sidewalk vendors and supporters across the city. Years of arduous campaign organizing led to a local political victory; in April 2017 city council decriminalized street vending, protecting vendors from some penalties, such as deportation, but not from fines.

Decriminalization of vending at the state level followed in the fall of 2018 with the enactment of SB946. Decriminalization is not legalization, however, and this bill leaves both the specifics of permit and regulatory programs to local jurisdictions. Los Angeles City Council voted to establish a permit program to protect vendors instead of a regulatory process based on rules and bylaws. The permit program taxes vendors, which addresses a concern raised by brick-and-mortar stores that feel burdened by their own taxes, and it also requires food vendors to meet a set of health code standards.

This means additional costs for Los Tamaleros — popular food trucks that make and sell tamales — and other vendors who make food at home. Many will now need new equipped carts and certified storage containers as well as access to licenced commercial kitchens to prepare provisions. A month after City Council voted in support of vendors to establish a permit program, they officially legalized street vending in Los Angeles, which takes effect on Jan. 1.

Over the years participants in the campaign explored how sidewalk vending could be legally integrated into the city’s economy in a just manner that acknowledges merchants as small business owners who generate money and create jobs. The town hall model, with its emphasis on political education and grassroots engagement, led to the vision of a local legalized vending policy. This vision was scaled up to include protections for workers across the state and continues to build the movement towards an inclusive economy grounded in equity and protections for the most disenfranchised in the workforce.

Meetings continue to be organized, as more vendors join in the effort to foster “active streets,” a term used by ELACC Organizing Director Carla De Paz. Active streets are areas with more vendors that have increased foot traffic, lighting and human interaction, which create communities around memories and cultural expression. De Paz also notes how active streets cultivate a sense of collective security that can be recognized as an alternative to policing.

The all important permit program is not completed, and it is up to city council to finalize the written measure. The campaign has emphasized several goals moving forward. They are focused on incentivizing vendors to sell healthy food in neighborhoods without access to fresh fruits and vegetables and developing a stronger non-profit infrastructure to support merchants. This includes creating more community-run licensed kitchens, and partnerships that legitimize vendors within the vast network of farmers markets throughout the city. A “buycott” was launched for the holiday season, encouraging communities to find creative ways to support their neighborhood vendors.

The future is bright for the coalition, and their dynamism has the potential to lead to a national and transnational solidarity movement that could empower vendors globally.

This story was made possible by our members. Become one today.