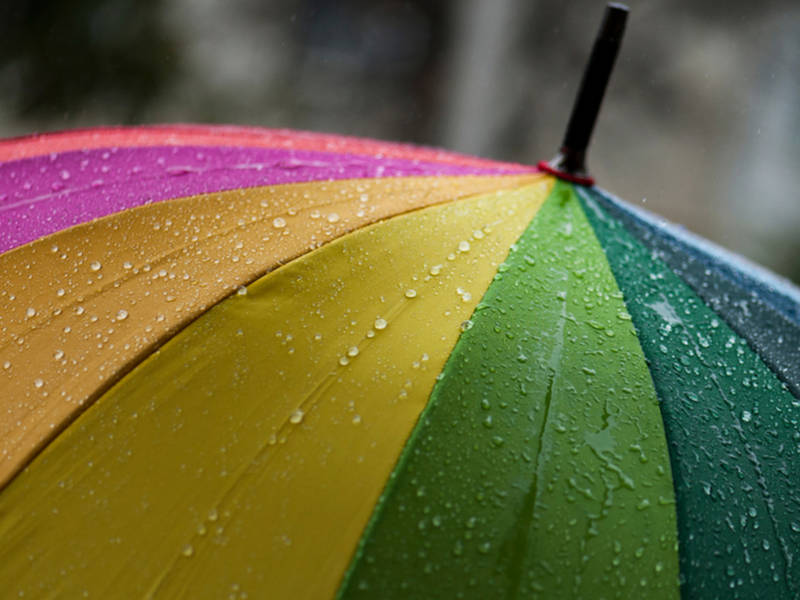 Shortly after 6:30 Monday morning, the NWS issued an Urban and Small Stream Flood Advisory for western Los Angeles County. It will be in force until 9:30 a.m.

“National Weather Service Doppler radar and automated rain gauges indicated moderate rain occurring across most of Ventura County and western Los Angeles County,” according to a statement explaining the advisory. “Rainfall rates between 0.10 and 0.25 inch per hour are being observed. This will cause urban and small stream flooding in the advisory area. Roadway flooding can be expected.”

Motorists who encounter street flooding should turn around immediately.

Additionally, a winter storm warning denoting potentially perilous conditions will be in effect in the San Gabriel Mountains from noon Monday until 10 a.m. Tuesday, the NWS said in a statement.

Heavy snow is expected, with snow accumulation of 6-12 inches anticipated above 5,000 feet and 1-3 inches between 4,000 and 5,000 feet, according to the NWS. There also could be light slow accumulation down to 3,500 feet, which could affect Interstate 5 through The Grapevine.

At the same time,”damaging” winds of 25-35 miles per hour gusting at up to 60 mph will buffet the northwest San Gabriels, including the Interstate 5 corridor, the weather service said. But no other warnings of high winds were issued for any other part of L.A. County early Monday morning.

“Plan on difficult travel conditions, including during the evening commute on Monday and the morning commute Tuesday. Be prepared for significant reductions and invisibility at times,” according to the NWS statement discussing mountain conditions. A Winter Storm Warning for snow means severe winter weather conditions will make travel very hazardous or impossible.

“If you must travel, keep an extra flashlight, food and water in your vehicle in case of an emergency. The latest road conditions from CalTrans are available by calling (800) 427-7623.”

Along the L.A. County coast, breaking waves of 4 to 7 feet, with maximum sets of 8 feet, are expected, increasing to 5 to 8 feet Monday afternoon through Tuesday, according to the NWS. The high surf then is likely to continue Tuesday night through Friday.

The conditions create “an increased risk for ocean drowning,” warned an NWS statement on maritime conditions. “Rip currents can pull swimmers and surfers out to sea. Large breaking waves can cause injury, wash people off beaches and rocks, and capsize small boats near shore.”

Forecasters warned swimmers who get caught in a rip current to “relax and float. Don’t swim against the current. If able, swim in a direction following the shoreline. If unable to escape, face the shore and call or wave for help.”

“It’s going to be a very wet week for Southern California,” Hall said.

The Woolsey Fire area in Ventura County and in the Malibu area in L.A. County is the most vulnerable of the region’s burn areas, Hall said. The Los Angeles County Sheriff’s Department emphasized the risks in a statement.

“Authorities warn that all residents who live in or near the Woolsey Fire burn area should remain aware of their surroundings and weather conditions during these storms. Even small amounts of rainfall rates may result in significant mud and debris flow, so we strongly encourage residents who live in or near Woolsey Fire burn areas to be ready to evacuate at a moment’s notice,” said Los Angeles County Sheriff’s Captain Darren Harris.

“If you feel unsafe or think that hazardous conditions near your home may develop, do not hesitate to leave. Elderly residents, individuals who have medical conditions and residents who own large animals should make plans now to leave their homes as a precaution.’

L.A. County public safety officials said communities in low-lying areas or next to steep slopes or waterways are particularly at-risk of falling debris and mud flow. Residents living in homes with limited roadway access or that can become isolated for an extended period due to the storm should consider leaving before storms arrive, and homes or neighborhoods with gates should consider leaving them open to avoid being trapped due to mud flow accumulation; even one-inch of mud can restrict gate operations.

“If your property becomes unsafe and there is no time to evacuate, seek safe high-ground,” urged the sheriff department statement. It added:

“Since all canyon roads may be blocked and subject to closure for extended periods, residents should have enough food, water, medication and supplies for at least seven to 10 days for all family members, including pets and large animals.”

The rain is forecast through Thursday.

City News Service contributed to this post; Image via alexpopov/Shutterstock