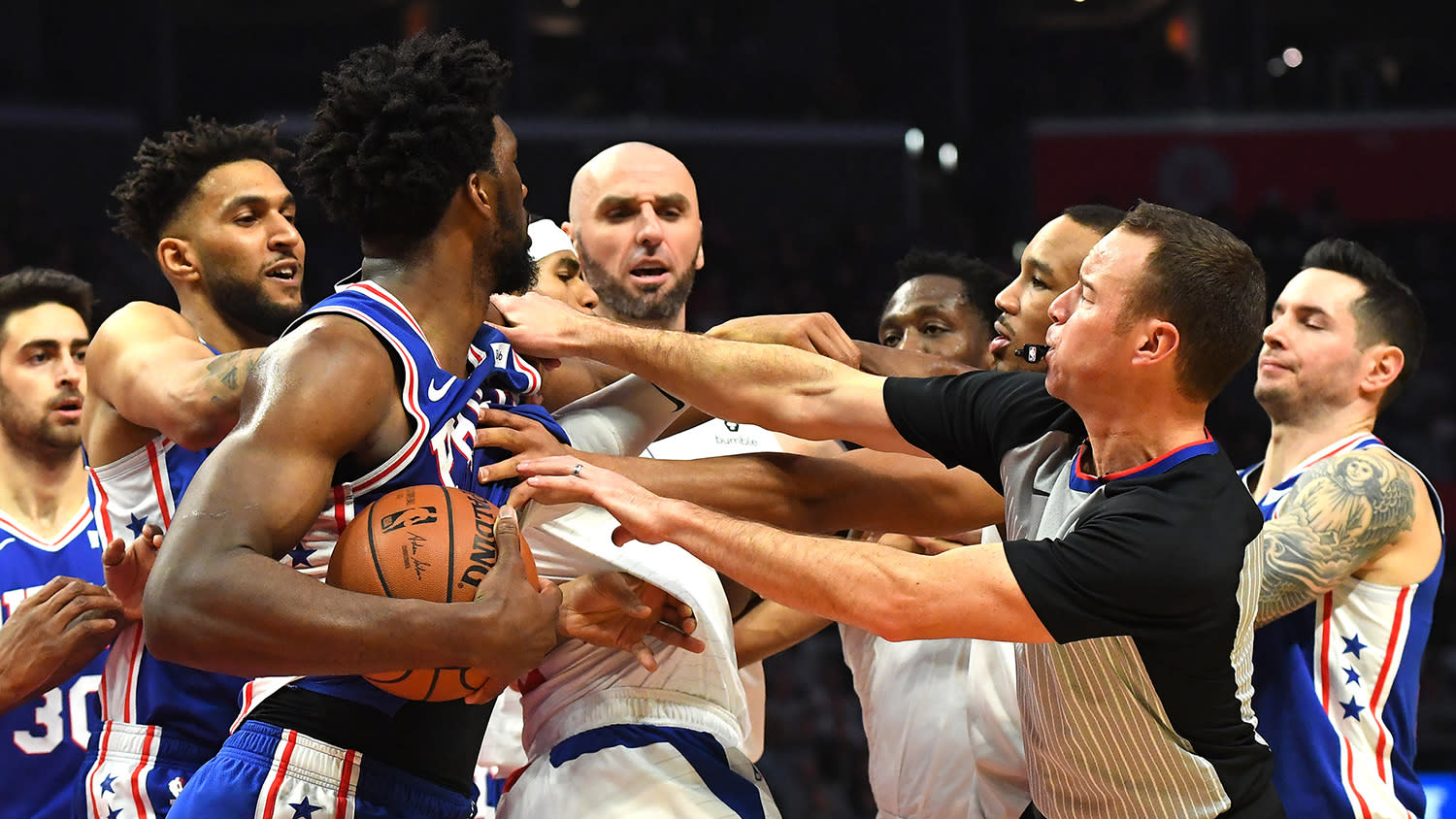 Sixers leave Los Angeles with two fights, one ejection and a win over Clippers originally appeared on nbcsportsphiladelphia.com

In hockey, fighting is often viewed as a way to wake up the troops when your team is down and out.

In basketball, scuffles are seen in a less positive light. The potential for technical free throws, ejections, suspensions, even injuries – you typically don’t want your star players near any of it.

The Sixers didn’t beat the Clippers Tuesday night, 119-113, because of two fourth-quarter altercations, the second of which resulted in Jimmy Butler‘s ejection. But, after their 34-point loss in Portland on Sunday, it wasn’t the worst thing in the world to see the Sixers show a little fight.

Joel Embiid, as he usually is, was at the center of the drama for the Sixers. Between the whistles, he scored 28 points, grabbed 19 rebounds and cleaned up the Sixers’ perimeter defensive mistakes. And after a whistle with 9:32 left in the fourth quarter, he picked up a technical foul for a contentious exchange with Patrick Beverley highlighted by a couple firm pushes.

A little over two minutes later, Butler and Avery Bradley were ejected, as Butler objected to some off-ball grappling and gave Bradley a two-handed push in the neck.

Ben Simmons, who posted 14 points, nine rebounds and eight assists, supported his teammate as soon as he noticed the altercation, stepping in between Butler and Bradley.

Butler said Embiid’s scrap may have been a factor in his ejection.

Maybe that had a little bit to do with it. I like it though. I’m a competitive man. You’re supposed to be enemies on the floor. I think that’s what Philly likes to see…Obviously you don’t like to see fighting. But I like the energy it brings.

Embiid actually took a shot from one of his own teammates in the third quarter, when Simmons elbowed him in the face as both players rose for a rebound. He appeared frustrated with Simmons in the moment but dismissed the incident after the game, saying it stemmed from instinctive concern over getting hit in the region where he suffered a left eye orbital fracture last season.

“I felt an elbow on my face and I kind of freaked out because that’s the same face I had the surgery on,” Embiid said. “But it was a basketball play, nothing to talk about.”

Simmons said he wasn’t sure what happened on the play.

He thought the Sixers played with a different kind of energy Tuesday, for better and for worse.

“I think guys were a little frustrated, emotions were kind of high tonight,” Simmons said. “Day after New Year’s, so I think everybody was a little tired.”

“Beverley is the type of guy to try to get under people’s skin. Something happened between Avery and Jimmy – I don’t know what happened. Guys get pissed off when guys are doing little things like that, but it is what it is. Try to keep our heads.”

At the end of the night, the Sixers left Staples Center with a win and their three stars healthy and available to play Wednesday in Phoenix, where the Sixers will wrap up their five-game road trip.

The actual, physical pushing and shoving likely aren’t prudent on a nightly basis, but it’s hard to fault the spirit behind it.

“I like the competitiveness of everybody,” Butler said. “I think we go out, we fight every single night, we all want each other to be successful, to be great. I think that’s the way we’re going to continue to win basketball games.”

Click here to download the MyTeams App by NBC Sports! Receive comprehensive coverage of your teams and stream the Flyers, Sixers and Phillies games easily on your device.

More on the Sixers