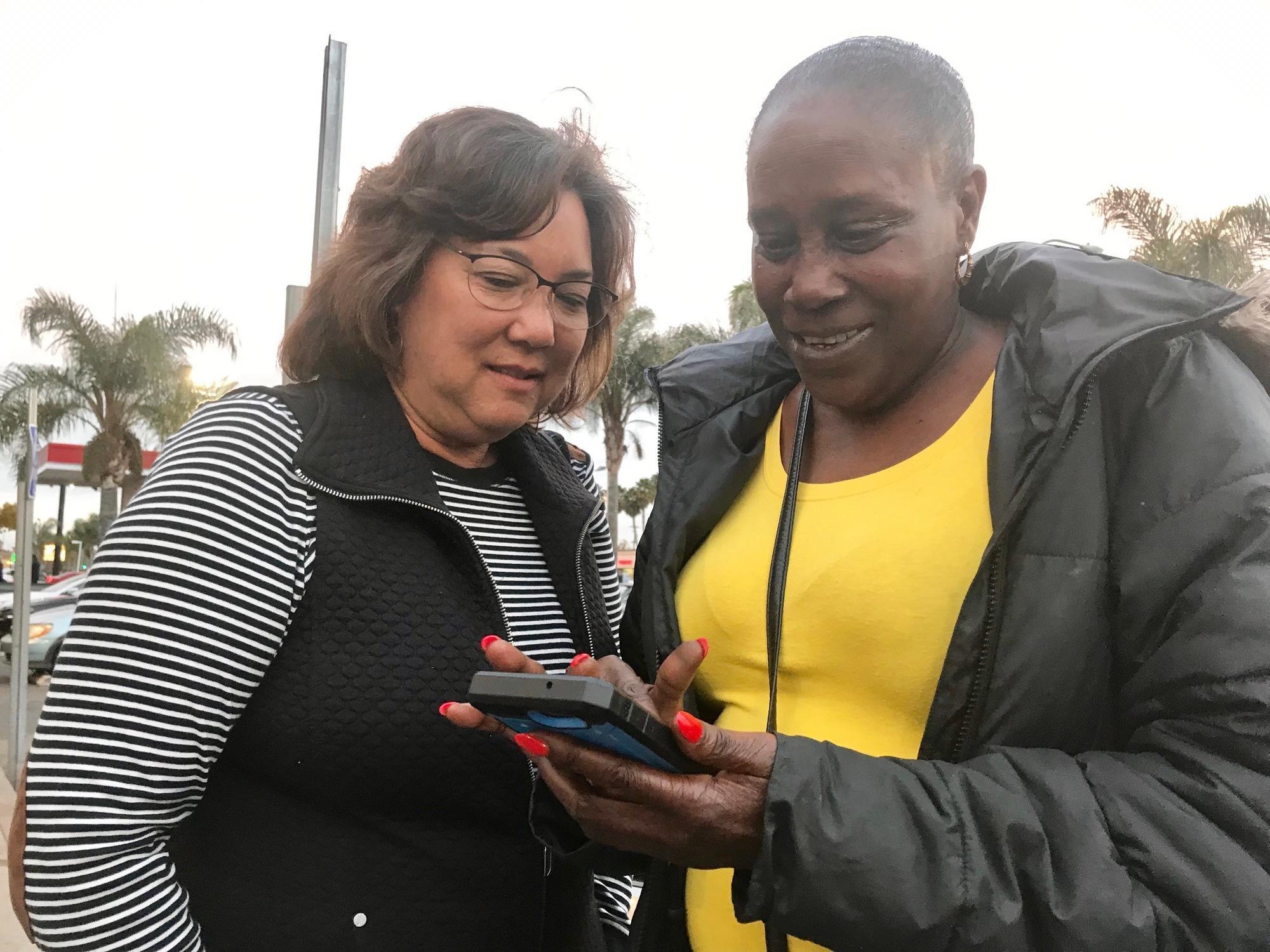 Linda Huff is a grieving grandmother and unemployed child-care worker who sleeps on a sofa, for $150 a month, in the living room of a shared backyard unit in Lynwood.

Former nurse Gayle Coyle-Ikemoto is a health insurance executive who lives comfortably in a two-story house in Torrance with her husband, a semi-retired graphic designer.

In a teeming metropolis where communities run together but people seldom intersect across socioeconomic dividing lines, Huff and Coyle-Ikemoto have bonded over a shared interest.

Last year, Huff’s daughter was sent to prison for more than 20 years after driving under the influence and killing a 22-year-old passenger in another vehicle. The daughter’s four children now live with four foster families.

Huff would love to have her grandchildren living with her, and Coyle-Ikemoto is trying her best to make that happen. Both women have become exasperated while fighting an overburdened system in which tens of thousands of children — many of them products of multi-generational poverty in all its most toxic forms — live in limbo.

It may be that her housing and income problems stand in the way of getting the kids, but Huff couldn’t have anticipated her daughter being sent away. Two years earlier, Huff’s son was shot and killed while walking down a South Los Angeles street — she saw a video of the killing on TV news — and she sunk into depression and fell out of work.

“I don’t get it,” said Coyle-Ikemoto, who notes that Los Angeles County is paying far more for foster care than it would cost to provide rental assistance to Huff and reunite the kids. Foster families receive about $900 and up per child. “The two big issues are housing and income, and I still believe those are not insurmountable.”

If Huff were given foster care of the kids, she’d get compensated by the county, said Coyle-Ikemoto, and that would solve her housing and income problems. She and Huff say it hasn’t been made clear to them what the problem is, and they said it’s often hard to get hold of the people they need to talk to.

So how did a suburbanite with an MBA become involved in the life of a woman who is no stranger to poverty and tragedy?

Years ago, Coyle-Ikemoto saw a story in the Daily Breeze about a program called CASA, which stands for “court-appointed special advocate,” and decided she’d like to sign up some day. It’s easy to be overwhelmed by massive social problems, or to ignore problems altogether. But about 1,000 people like Coyle-Ikemoto are trying to make a difference at CASA, which trains volunteers to advocate for children in the welfare system. They meet with and monitor the kids, take them to the doctor and the park, stay in contact with families and weigh in on what they think is best. Maybe the most valuable thing they do is convince kids who have known disappointment, abandonment and worse that someone is interested in them.

Coyle-Ikemoto got her first case in February. She was assigned to a child with sickle cell anemia. He was 6; he was in foster care. And he was one of Huff’s grandchildren.

The county Department of Children and Family Services is prohibited from talking about specific cases. Director Bobby Cagle told me he was not familiar with this one, but said he would take a look at it. There could be any number of reasons children would not be reunited with one another in the care of relatives, Cagle said, but poverty is not one of them, and housing assistance is arranged in certain situations.

“In this county we have made the decision that family members should take precedence,” said Cagle, who told me 52% of the county’s 20,000 foster children are with relatives.

The youngest of Huff’s grandchildren lives with relatives on his father’s side, according to Huff, and the relatives may want to keep him. But at the very least, she’d like to have the other three with her.

“I said to Linda, ‘I will go to the mat for you on this, but you have to be honest. Is there anything in your background I need to know?’ ” said Coyle-Ikemoto, who became convinced over time that Huff would make a good guardian.

Huff is, after all, a former child-care worker. If social workers have some issue with Huff, Coyle-Ikemoto said, they should at least spell it out instead of leaving them frustrated, waiting and unable to explain things to the kids.

Coyle-Ikemoto said of the boy she advocates for: “When he’s with me, he’s kind of subdued. But when he’s with his grandma he becomes himself because he’s with family. So I can’t help but say, yes, this kid needs to be with his family.”

I can certainly appreciate that Huff’s current living arrangement isn’t suitable for kids. On the other hand, I spent a couple of recent months exploring homelessness at an elementary school in Pacoima, where large families live in motel rooms and garages, with no interference from child welfare authorities. I don’t know everything the county might know about Huff, her grandchildren and the foster parents they now live with, but if the goal is to get children out of foster care and into permanent placement within two years, preferably with relatives, that deadline is coming up soon.

The wheels turn slowly in big bureaucracies, and as children’s court judges, lawyers and children’s advocates told me, the L.A. County welfare system is bursting. Sometimes what stands in the way of reunification is housing assistance, domestic abuse prevention classes, addiction rehab services, mental health evaluations, etc. But referrals to outside agencies take time and waiting lists are long. Meanwhile, social workers have caseloads in the 20s, and 160,000 reports of unsuitable home conditions were investigated last year, Cagle said.

At the Edelman Children’s Court in Monterey Park each day, the parking lot is jammed and nearly two dozen judges chip away at stacked-up cases. Courthouse lobbies are filled with lawyers, foster parents, relatives and children, some of whom watch cartoons or do arts and crafts, some of whom are having their best day in months because an adoption or return home has just been approved. And some of whom sit alone, looking as if they’ve had enough chaos in their young lives already and would rather be anywhere else.

Taking it all in, I was reminded of my days at the elementary school in Pacoima, where it occurred to me that we spend too much time criticizing so-called failed institutions without addressing the causes of their burdens.

For too many people, this service economy does not pay the bills, and housing costs add to the dysfunction and despair that gather daily in our schools and courthouses. That leaves two options, generally speaking: a better job of reinventing the economy and educating more people to fill jobs that can support families, or more help for those who keep falling further behind even while working.

There’s no presto there, no wave of the wand to bring raging rivers of milk and honey flowing through every valley. The world has changed, corporations chase cheap labor and automation is a payroll thief, no matter how much anybody wants to pretend Detroit will rise again and coal will fire anew. But there should be both pride and shame in a state that has the world’s fifth-largest economy and the nation’s highest rate of poverty.

Shouldn’t the plus erase the minus?

Yes, of course, and figuring things out is the job of the new set of legislators coming in, and of Gov.-elect Gavin Newsom, who made child and parental support a centerpiece of his campaign.

From his vantage point on the bench, said Judge D. Zeke Zeidler at the Children’s Court, it appears that if more services were provided to parents suffocating under the weight of poverty and its destructive associates, they could get their children out of the system sooner and save taxpayers in the long run.

Huff hopes to have her grandchildren living with her long before they’re teenagers.

“I’d sleep in the bathtub or on the floor if I could have them,” she said Monday afternoon when she and Coyle-Ikemoto met at a coffeehouse in Lynwood.

“I’m willing to be a guarantor on an apartment,” said Coyle-Ikemoto, who had another bit of encouraging news. She said her daughter is a hospital dietician who might have a job available for Huff.

If that works out, maybe Huff can move off the sofa and into a place of her own. A place big enough for the grandchildren.