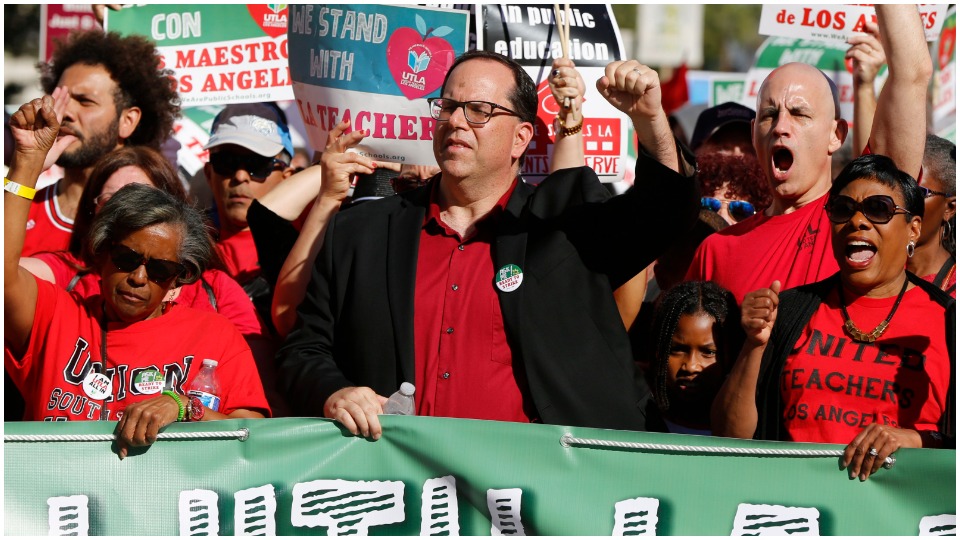 In this Saturday, Dec. 15, photo, United Teachers Los Angeles President Alex Caputo-Pearl, center, joins teachers at a rally next to the Broad Museum in Los Angeles. Teachers in the nation’s second-largest school district will go on strike next month if there’s no settlement of its long-running contract dispute. The announcement by United Teachers Los Angeles threatens the first strike against the Los Angeles Unified School District in nearly 30 years and follows about 20 months of negotiations. | Damian Dovarganes / AP

LOS ANGELES—At a news conference held Dec. 19, United Teachers Los Angeles (UTLA) dropped the other shoe: After 20 months of anxious but unfruitful negotiation with the Los Angeles United School District (LAUSD) and what UTLA calls “bad faith bargaining,” the 31,000-strong union has said, “Enough is enough!” and has called a strike of its members beginning on Thurs., Jan. 10. In an August vote of the membership, a full 98 percent of union members voted to authorize a strike if bargaining continued to stall.

Teachers across the country are essentially saying the same thing to boards of education and those who set federal, state and local budgets: Don’t abandon our children! Some of their demands address teacher salaries which have not kept up with rising costs, and which drive talented professionals away from the field.

As often as not, however, the teachers have pointed to other problems which have devastating effects on the children they are trying to educate for successful lives. For example, according to the statement on Dec. 19, UTLA is demanding that LAUSD immediately:

Each of these points directly affects student outcomes. As one kindergarten teacher said to me, “I’m thinking of telling my kids, ‘If you’re going to get sick, make sure it’s Tuesday, because that’s the day the nurse is here.’” Otherwise, parents are called and the students are sent home, perhaps unnecessarily.

“Unless these issues are genuinely addressed and reflected in a bargaining proposal,” UTLA says, “educators will be on the picket lines beginning Thursday, January 10.”

LAUSD has been a battleground for years as wealthy industrialists, investors and funders bankroll campaigns for seats on the school board, favoring charter school advocates who essentially aim to destroy public education. It is an attack on the commonweal that echoes throughout the United States.

A demonstration in downtown Los Angeles on Sat., Dec. 15, that attracted 50,000-plus red-shirted teachers, parents and supporters marched over to the Broad Museum, a showcase for the art collection of Eli and Edythe Broad. Marchers chanted, “Education is a right!” and “Who’s got the power? … We’ve got the power! What kind of power? … Union Power!”

Eli Broad is the “B” of K&B Homes, also known as Kaufman & Broad, a development corporation responsible for creating thousands and thousands of mid-range suburban homes. He has exercised his financial muscle in recruiting charter school candidates to the L.A. school board. Last May, a pro-privatization majority appointed millionaire Austin Beutner as LAUSD superintendent, who has proposed breaking up the L.A. schools into 32 “portfolio” districts with little or no public accountability or common standards.

Beutner is backed by other wealthy individuals as well, such as former L.A. Mayor Richard Riordan, the Walton family (of Walmart fame), and John Arnold, former Enron executive and hedge-fund manager. Privatizing public education is one of the top prizes in the neoliberal race to the bottom, exposing what was once the pride of our nation, our public school system, to the greed of corporate hucksters and profiteers in the Betsy DeVos mold.

Austin Beutner, a former investment banker with no prior experience in public education, refuses to use the district’s record-breaking $1.9 billion reserve for basic student needs and will not address the $600 million drained from neighborhood public schools by the corporate charter schools. He is reported to have personal ties to the charter school industry, which at present enrolls one in ten students in California.

The portfolio model has come up short in other cities, such as Newark, New Orleans, and Indianapolis. Amongst its failures are increased school closings, heightened segregation and disparities between schools, overcrowded classrooms, outdated textbooks, and compromised learning conditions.

More than nine out of ten LAUSD students are children of color—Latinx, Asian and Black primarily. As spending decreases on this second-largest public education system in the country (after New York City), it is widely seen as a racial attack on the future for these 600,000 kids. Although it is the richest state in the country, California’s spending per pupil ranks only 43rd out of fifty. It ranks 48th in student-to-teacher ratios, and L.A.’s ratio is among the highest in the state, with classrooms of 45 students not uncommon.

As part of the bargaining process, a neutral fact-finding committee studied the issues in LAUSD. Its report, released on Dec. 18, underlines several UTLA positions: That LAUSD had $1.8 billion in reserves, though the total is now closer to $2 billion (the annual budget is approximately $7.5 billion); that LAUSD should increase staffing of nurses, counselors, and other professional staff; and that LAUSD should eliminate a section of the contract that allows the district the unilateral right to increase class size.

As far as salaries go, L.A. teachers are lagging behind other districts in nearby cities. In Long Beach, the second-largest city in Los Angeles County, for example, a starting salary is $52,208, rising with years of continuing education and experience to $106,679. In L.A., however, teachers start at $43,913 and top out at $86,225. UTLA points out that in 2017 members of the school board received a 174 percent pay raise.

One problem for teachers is that many are forced to take second and third jobs to make ends meet in a high-rent city such as L.A.; another is that the work can be so discouraging after the first couple of optimistic years, that turnover is tremendous. Many teachers simply do not last more than four or five years in the system.

There is still a wide gap between what Beutner is offering and what UTLA is demanding. Even the offer Beutner has made comes with unacceptable conditions such as making it harder to qualify for healthcare in retirement and requiring more work hours now.

“As was demonstrated when more than 50,000 people marched through the streets of L.A. on December 15, if we strike, it will be a strike for our students, a strike with our parents, and a strike for educational and racial justice,” says Alex Caputo-Pearl, president of UTLA. “We have watched underfunding and the actions of privatizers undermine our schools for too long. No more. Our students and families are worth the investment, and the civic institution of public education in Los Angeles is worth saving.”

Is there a budget crisis? That is a subjective question, of course, aside from the almost $2 billion reserve in the system at present. In socialist countries which were making efforts at greater egalitarianism among their populations, a visitor would often be told, “There is only one privileged class of people here: Children.”

The essential issue is how much of a priority a society places on a full and rich education for its people as an investment in its future. If the privatizers have their way, working people in coming years will not be able to read a manual or a map, compute formulas, understand scientific principles, speak a second language, learn to play music, etc., etc.

Are our schools failing? It depends what you mean by that. If you mean, Are we bringing kids up in ignorance of the world, unable to balance a bank account, uneducated as to the way their bodies work, incapable of filling out a job application, deprived of meaningful physical training and sports, left alone to get into trouble with the law, destined to get caught in the maw of the prison-industrial-military complex, then yes, our schools are truly accomplishing the goals of the global corporate enterprise and are a brilliant success! As candidate Donald Trump used to say, “I love the uneducated!”

But that’s not what professional educators want—nor the parents, nor the students. That is an extremely short-sighted vision of what it means to be educated in today’s world.

America’s greatness must start with a re-dedication to a world-class public education system across the land. We cannot squander our children’s future, because it is our entire collective future as a nation. Perhaps the new Democratic supermajorities in the California Senate and Assembly will take the education challenge to heart. And the new Democratic majority in the House of Representatives may also start recommending some improvement on the national level. If not, they will surely be hearing from their constituents.

A line in the sand has been drawn. All eyes in L.A. are on what happens Jan. 10 and beyond.

Watch the Facebook Live stream of the Dec. 19 UTLA press conference here. Watch this video from UTLA about Supt. Beutner’s misrepresentations to the media, which includes footage of the Dec. 15 march.