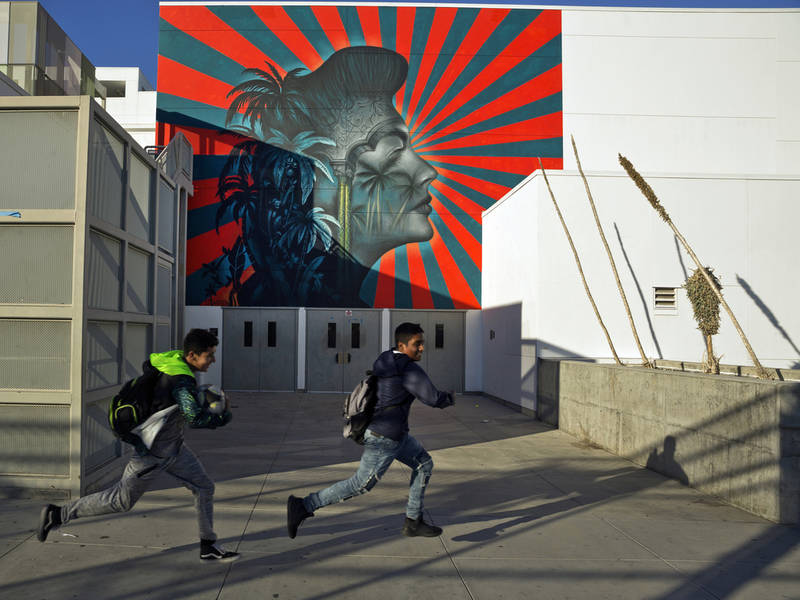 LOS ANGELES, CA — The Los Angeles school district is facing heavy backlash over controversial plans to paint over a mural at a Koreatown campus to appease community members offended by the imagery, which they said is a reminder of the horrors committed against their people in World War II. On Monday, artist Shepard Fairey said he would insist his mural of Robert F. Kennedy at the same campus would have to be painted over, too, in protest of the school district’s censorship.

The controversial mural by Beau Stanton is featured at the RFK Schools campus, which sits atop the location of the Ambassador Hotel where Kennedy was murdered. Stanton’s mural pays tribute to Hollywood’s golden era. It features a profile of actress Ava Gardner against a background of sun rays and palm trees, a nod to the Cocoanut Grove, the former celebrity haunt attached to the hotel. The school district said it will paint over the mural after a group of Koreatown residents objected to the depiction of sun rays, which were similarly used in the Japanese battle flag during World War II.

Japan committed atrocities against Koreans during the war, and residents said the imagery evokes the same feelings of persecution as the swastika or burning crosses. However, a growing group of artists and community leaders call the comparison a stretch and the district’s decision to capitulate to the residents a dangerous overreach.

In support of artist Stanton, Fairey told the Los Angeles Times that he would call for the removal of his mural of Kennedy at the RFK Schools campus on Wilshire Boulevard.

“I’m proud of that mural,” Fairey said of his own work. “I’d love for that mural to stay, but this is the only leverage I have.”

And now, the Kennedy family has weighed in to support Stanton and Fairey. One of Kennedy’s children voiced support for Stanton and for Fairey’s response, the Times reported.

The school district announced this month that it would erase Stanton’s mural after a group of Korean activists complained and threatened to sue.

Fairey and other critics say the L.A. Unified School District acted too hastily when it agreed to acquiesce to these complaints, which arose in recent months. The mural was painted more than two years ago at the Robert F. Kennedy Community Schools complex.

Fairey said he wants the school district to admit it made a poor decision in succumbing to what it apparently considered to be the path of least resistance. He hopes his stance will help build a some counter-resistance to pressure the district to reverse course.

His Kennedy mural is arguably one of the school’s defining visual elements. It is on an outside wall of the entrance to the library, which is built on the footprint of the Ambassador Hotel ballroom where Kennedy gave his last speech, in 1968. Moments later, an assassin fatally shot the presidential candidate in a pantry area next to the kitchen.

Fairey’ mural of Kennedy stands above the entrance to the school library, which is built on the footprint of the ballroom where Kennedy gave his final speech. It echo the style Fairey made famous in his portrait of President Obama.

“I have talked to a teacher from RFK about where the students stand, and they overwhelmingly want the mural to stay,” Fairey wrote to Garcia. “If Beau’s mural is removed I will reach out to students to have them take part in my mural being painted over as a symbol of the sacrifices that are sometimes necessary to stand up for important principles.”

Neither Garcia nor other school board members have responded to a request for comment. Superintendent Austin Beutner also has not commented.

City News Service and Patch Staffer Paige Austin contributed to this report. Photo: In this Dec. 13, 2018 file photo, a mural by artist Beau Stanton of actress Ava Gardner is displayed at the Robert F. Kennedy Community Schools complex school in Los Angeles. Artist Shepard Fairey will insist that one of his murals be removed from the Los Angeles school if officials follow through on plans to cover up Stanton’s mural that some community activists find offensive, the Los Angeles Times reported Monday, Dec. 17, 2018. Both murals are in Koreatown at the Robert F. Kennedy Schools complex on the former site of the Ambassador Hotel where Kennedy was fatally shot in 1968. Stanton’s mural depicts actress Ava Gardner against sun rays. Korean activists say it looks like the Japanese imperial battle flag. (AP Photo/Damian Dovarganes, File)