THOUSAND OAKS, Calif. — On a random December Wednesday at the Los Angeles Rams‘ practice facility, coach Sean McVay broke down Robert Woods as a wide receiver at USC by memory. It was an impressive feat considering it was more than six years ago and McVay probably wouldn’t have guessed Woods would one day play a pivotal role in his offense.

“I remember evaluating him, or just watching him play at USC, even as a true freshman when he’s making plays,” McVay said. “He had a great body lean where he could open his stride up, put it down, make all his routes look the same. You could see the ability to create after the catch.”

Two seasons after joining McVay in Los Angeles, Woods’ potential as a pro has been reached. 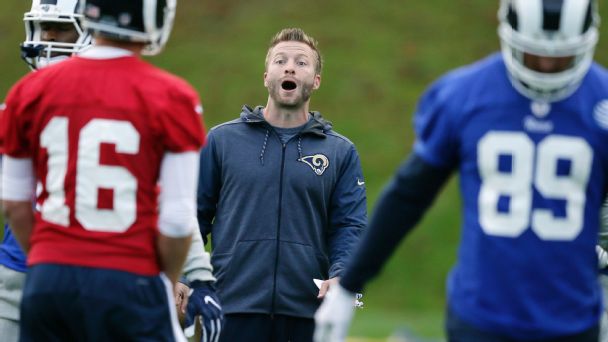 Anger sharks, The Standard, Straight G’s — if you want to learn about the Rams’ culture, take a less in ‘McVayisms.’ Story

In his sixth season, Woods had more than 1,000 receiving yards for the first time in his career. He has caught a career-high six touchdowns and added another rushing. He has done it for a 13-3 Rams team that has won consecutive division titles, secured the No. 2 seed in the NFC and has a bye as they await the divisional round of the NFL playoffs.

Woods, 26, looks right at home with the Rams, and he should. After all, Woods grew up in Carson, California — 13 miles south of the Coliseum — before becoming an All-American at USC.

But there’s nothing Hollywood about him. He’s not your prototypical star NFL receiver, and for a coach who values team over individual, that’s a good thing. Woods isn’t flashy, he’s not selfish, his social media isn’t bursting with hot takes. About the only things Woods will do to stand out is anything his coaches ask, or whatever he knows will make his late sister proud.

When Woods and his family decided he would attend Serra High School in Gardena — a small, private school with a solid local football program — coaches warned that Woods wouldn’t be scouted by major colleges. But Woods’ parents had their minds set. Serra, a 14-minute drive from their home in Carson, would provide a solid education. It was on his dad’s way to work at Pepsi and, most importantly, it’s where Woods’ older sister, Olivia, went.

Olivia, Woods’ only sibling, needed a small campus. She used crutches to help herself around after cancer had invaded her leg.

So Woods joined his sister at Serra and immediately made an impression with football teammates.

“It’s funny with him,” said Serra football coach Scott Altenberg, who keeps in regular communication with Woods. “Right away he was, he was named a captain as a sophomore. No one had ever done that. … He was a pro from Day 1. From the way he acted, from the way he did everything, he just was an amazing — like he was put together so well at such a young age. It was unbelievable.”

Woods led Serra to a state title, and he lost only three games in his three seasons on varsity. He also starred as quarter-mile runner for the track and field team.

In the middle of his high school career, Olivia, also his best friend and his personal cheerleader, lost her five-year battle with cancer. She died when she was 17, before her senior year of high school. But her memory is ever present, and the motivation she has provided to Woods is constant.

“After seeing her, just I feel like nothing could really defeat me,” Woods said. “My sister battled cancer. Always pushed through, always was able to do stuff on her own, and so I feel like me playing football, when stuff gets hard, it’s nothing compared to what my sister went through.”

Woods emerged from Serra as a five-star recruit and signed at USC.

Under former coach Lane Kiffin, Woods started as a freshman before a breakout sophomore season. He was a finalist for the Biletnikoff Award, which is presented to the top receiver in college football, after catching 111 passes for 1,292 yards and 15 touchdowns.

“Mature beyond his years,” former USC receivers coach Tee Martin said. “He’s a cerebral player. I remember coaching him and he was always studying, always watching tape, always had a playbook.”

But Martin also was adamant that it’s Woods’ competitive nature that often has gone overlooked. “He had this internal fire about him that you just knew the dude didn’t play around,” Martin said. “He was quiet, but he was always that guy that you felt like gained respect from his teammates and opponents — because you knew this dude, he didn’t play around. Off the field he is going to laugh, joke, he’s a really nice family guy, all that stuff. But when it’s practice time, or game time, it was like this dude wants to cut your throat.”

As a junior, his final season with the Trojans, Woods broke USC’s all-time receptions record in a blowout victory over Colorado. A video presentation lit up the Coliseum scoreboard with former Trojans legends congratulating Woods.

Woods pointed to his wrists, which were wrapped in tape marked with the letter “O” in honor of his late sister.

‘Even better than expected’

When McVay arrived in L.A. two seasons ago, he needed to transform the culture and upgrade the roster. So he went and signed the player he watched star at the Coliseum years before.

The Rams gave Woods a five-year, $34 million deal, which drew skepticism outside of the team facility. After being selected in the second round of the 2013 draft, Woods never surpassed 700 receiving yards in four years with the Buffalo Bills and was considered a possession receiver.

From the wild-card round through Super Bowl LIII, ESPN.com has you covered.
• Full schedule, news, notes »
More NFL coverage »

Woods’ reputation as a pro was respected and the Rams were certain he would help them on the field as well as in the locker room. And Woods was certain, despite hearing cautionary tales from back home about the Rams disastrous homecoming season in L.A., it would be a fit.

As McVay studied the tape, he knew the 6-foot, 195-pound Woods had potential that had not been fully tapped. In his first season under McVay, Woods caught 56 passes for 781 yards and five touchdowns, despite missing three games because of a shoulder injury.

This season, his role has expanded.

Woods has played on the outside and in the slot. He has been used in jet motions and as a ball carrier. Woods won’t hesitate to block, and he takes as much pleasure in clearing a path for a teammate as he does in carving his own.

“He’s been even better than what I expected, as much confidence as we had when we were able to sign him,” McVay said. “His versatility, what he does, his leadership, just kind of the way that he goes about his business day in and day out. You love working with guys like that.”

Some who thought the Rams overpaid for Woods now believe they didn’t pay him enough.

“I feel like finally getting the opportunity to do what I can do, and I feel like the numbers are finally starting to show who I am as a player and a receiver,” Woods said. “And I feel like it’s just the beginning.”

Woods has 86 catches for a team-high 1,219 yards this season. He became the fourth player in NFL history to record at least 60 receiving yards in 14 consecutive games in a single season, joining Marvin Harrison, Antonio Brown and Andre Johnson.

Despite a Pro Bowl snub — Woods was voted as a fifth alternate — he said players and coaches around the league have taken notice of his elevated play.

“He deserves it,” Rams quarterback Jared Goff said. “Everything he does off the field, on the field, blocking, communicating, route running, the presence he brings to that receiver room. The professionalism he comes to work every day with has been huge for not only that receiving room, not only the offense, but our whole team.”