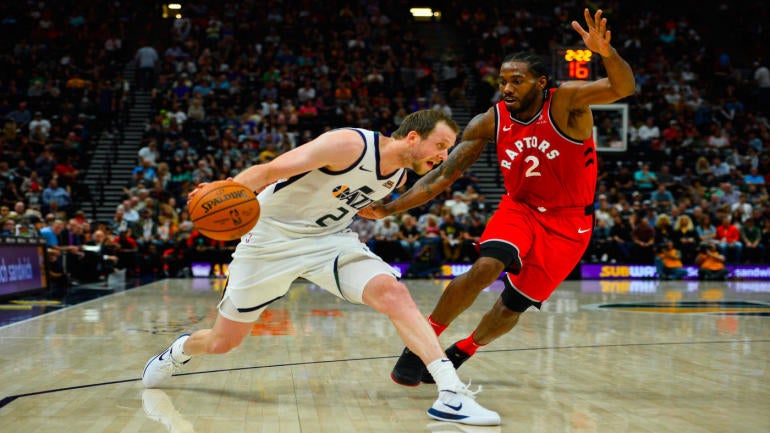 The Milwaukee Bucks will look to hold off the Detroit Pistons to maintain their slim advantage over the Raptors for the conference lead in the Eastern Conference.

Also, the best team in the West, the Denver Nuggets, will host the New York Knicks while the Philadelphia 76ers will cap off the night by visiting the surprising Los Angeles Clippers.

Kawhi Leonard was simply on tonight. The Raptors forward has a reached a career-high 42 points as a result of this nifty lefty reverse layup past the 7-foot-2 Rudy Gobert. Leonard finished with 45 points.

Crowder with a career-high 30 points

Jae Crowder had a career-high 30 points and five treys as the Jazz came up short in their upset bid against the Raptors.

Murray with a massive slam past two Knicks defenders

Jamal Murray might only be 6-foot-4, but he looked a whole lot bigger than his listed height on this dunk past two Knicks defenders.

Giannis dunks it over Pistons defender

Somebody needs to tell defenders to stop trying to guard Giannis Antetokounmpo when he takes it to the rim. This is an example of where players need to learn when to make business decisions when defending Giannis.

Kawhi Leonard knows how to lead a team without one of his All-Star teammates. Despite Kyle Lowry being absent against the Jazz, Leonard scored 19 points on a perfect 7-of-7 shooting from the field in the third quarter to give the Raptors an eight-point lead entering the fourth quarter.

Pascal Siakam sure knows how to finish off a fastbreak as the Jazz found out first hand on this sequence.

VanVleet jukes out Rubio, then lays it up past Gobert

We all know Fred VanVleet is not even 6 feet tall, but heck, he just converted a layup over a legit 7-foot-2 center. After juking out Jazz point guard Ricky Rubio, the Raptors point guard then proceeded to get a layup past Rudy Gobert.

Kyle Lowry sat out of the Raptors’ game against the Jazz. The All-Star point guard has played in only one of the team’s past eight games because of a lower back injury and the team has gone just 4-4 during that stretch. The Raptors have fallen behind the Bucks, who now own the East’s best record.