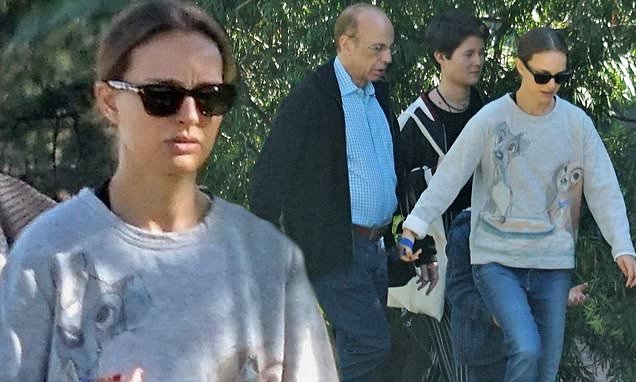 Natalie Portman enjoyed a leisurely stroll with her family on Thursday in Los Angeles.

The 37-year-old actress kept it casual in a grey ‘Lady and the Tramp’ sweatshirt along with faded blue jeans and sneakers.

She had her dark hair parted down the middle and up and accessorized with sunglasses.

Family outing: Natalie Portman was spotted on Thursday enjoying a dog-walking session with her family in Los Angeles

Natalie was out for a walk in the Los Feliz area with her parents Avner and Shelley and her seven-year-old son Aleph and one-year-old daughter Amalia.

Natalie and her father both held onto leashes as they took two dogs out for a walk.

She revealed on The Tonight Show starring Jimmy Fallon earlier this month that she filmed a concert for Vox Lux in her hometown.

Casual outfit: The 37-year-old actress kept it casual in a sweatshirt and jeans while walking dogs with her parents and children

‘They weirdly opened up a studio around the the corner from where I went to high school,’ said Natalie, who graduated in 1999 from Syosset High School in Syosset, Long Island.

‘My guidance counselor from high school brought her kids and her friends and they were in the audience. So, it was really cool,’ she added.

The actress also described her character Celeste Montgomery in Vox Lux as ‘kind of a disaster’.

The film starts by following sisters in 1999 who after surviving a violent tragedy become pop stars.

The second half of the movie by director Brady Corbet, 30, follows older Celeste and her teen daughter as the singer tries to navigate her career.

Vox Lux premiered in September at the 75th Venice International Film Festival and was released on December 7.