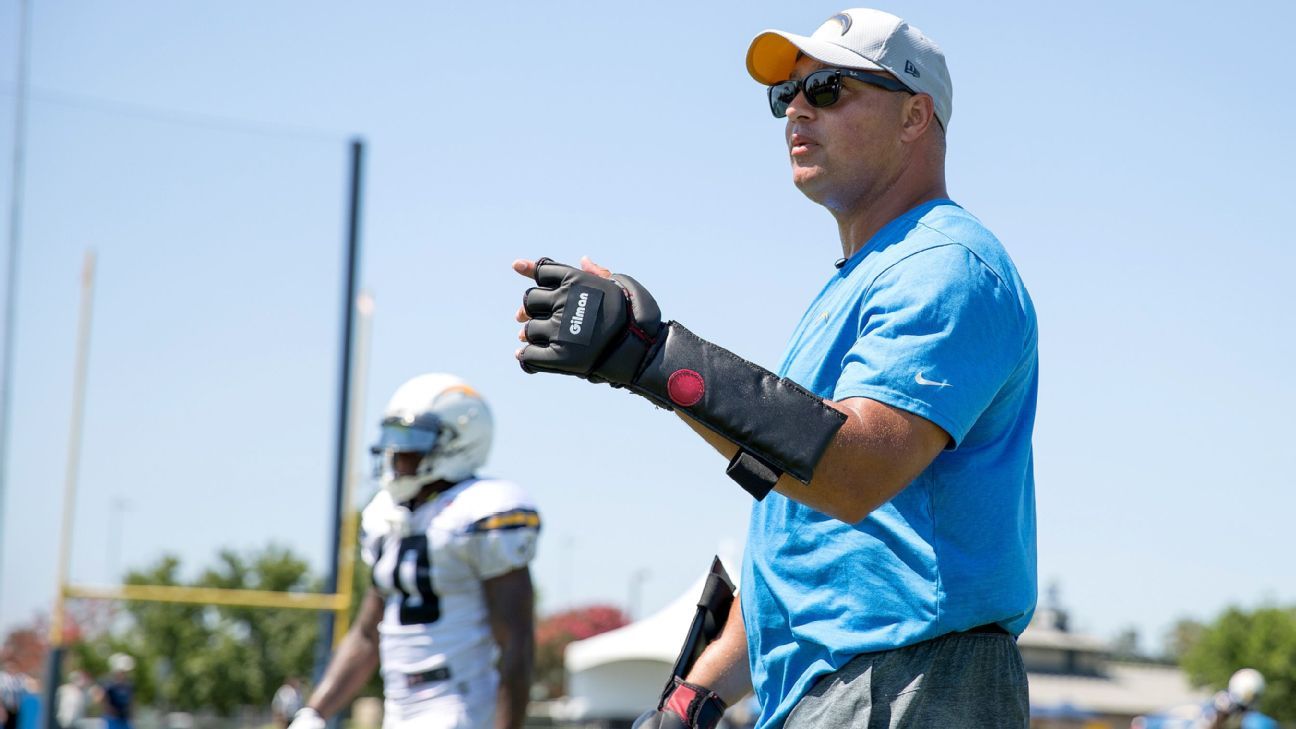 “It’s something we’ve evolved with and developed over the years, and it’s led me to some really successful and accomplished MMA fighters,” McGeoghan said. “I can always pick their brain and get a technique or two that will help us in some close-quarter combat down in the red zone, or at the line of scrimmage in third-and-2 when you’re getting a little more aggressive reroutes at the top of the route — just understanding combat.”

McGeoghan has been to the UFC Performance Institute in Las Vegas and plans to go again this summer.

“If I can pick out one or two things that makes sense, that’s usually all I need,” he said.

McGeoghan, 39, first started using these techniques with the help of trainer Marrese Crump while serving as the receivers coach at the University of South Florida in 2009.

“You have to get open in less than two seconds at times, and at most three seconds,” McGeoghan said. “So it’s all about quickly defeating press-man coverage.”

The techniques also led to an invention by McGeoghan while he served as the receivers coach for the Miami Dolphins in 2015.

Back then, McGeoghan used wristbands to try to protect his arms from injury. He eventually moved to padded gloves and developed modified mixed martial arts gloves to help teach receivers releases to get off press coverage.

Combat release gloves have helped train muscle memory and protect me from these killers. Had so many great players who inspired me to protect the ulnar styloid bone in the wrist. Player/Coach bond is 2nd to father/son in my opinion.Thanks and love to all the players I’ve coached. pic.twitter.com/LEUdbuZKaY

McGeoghan said he has seen other receivers coaches warming players up with the product on game days.

“He came in with some new coaching techniques for us and I think [the wide receiver group] has all done a good job buying in,” Chargers veteran Keenan Allen said. “I think the room did a good job picking up on it and putting it out here [during] games.”

Count New England Patriots coach Bill Belichick among those impressed by the skill set of McGeoghan’s receivers group. Belichick will have to figure out a way to stop those players Sunday in the divisional round of the AFC playoffs.

“They’re a very effective group, both in their route running and their size — their ability to go up and get the ball,” Belichick told reporters this week. “And also run after catch. Allen is a phenomenal player. He has great awareness, body control and quickness, especially for his size. It’s an outstanding group.”

McGeoghan is in his first year serving as Chargers receivers coach after Nick Sirianni left to join the Indianapolis Colts as the team’s offensive coordinator.

McGeoghan has taken an already talented position group and made it better.

According to ESPN Stats & Information data, the Chargers’ top four receivers — Allen, Tyrell Williams, Mike Williams and Travis Benjamin — are fifth in the NFL in yards per reception (14), tied for seventh in receiving touchdowns (22), eighth in receiving yards (2,699) and ninth in receptions (193).

“He’s been in [the wide receivers’] shoes,” Chargers coach Anthony Lynn said about McGeoghan. “He’s been there and done that, and can relate to those guys really well.

“At the same time, he’s very demanding. He teaches fundamentals and techniques. He’s done a heck of a job with that [wide receiver] room to get the most out of what he has.”

So proud of the practice habits of these @Chargers WR’s. @darealmike_dub brought a little Wakey Sauce to @StubHub last night. Bottles of Wakey “sauce” available for purchase this fall lol! #wakeemup pic.twitter.com/UBlInceq9g

One of McGeoghan’s projects was getting Mike Williams going. He did that by challenging the Clemson product early in the training camp to be great every day in practice, which is what Williams had said he wanted to do in the league.

“He was responsive and all of the credit goes to Mike,” McGeoghan said. “I’m not going to change. I’m going to be the same guy every day. I’m loyal to my players, but I’m also going to be loyal to the process of correcting young players. It’s important for me that young players get their habits developed the correct way so that they don’t form bad habits and end up not getting a second contract, getting traded or getting cut.”

McGeoghan said he’s pleased Williams is playing with a high level of confidence. He’s healthy, so that helps. After a so-so rookie season, Williams had a breakout second NFL season, totaling 43 receptions for 664 yards with 11 total touchdowns.

Playing against the Patriots is a homecoming of sorts for McGeoghan. While not a Patriots fan, McGeoghan said he respects the organization and what it has done for the community over the past two decades with its winning ways.

“I get the animosity, and at the end of the day people like to give you a hard time,” McGeoghan said. “And I like to give people a hard time sometimes. So when I come home to play the Patriots, I know what time it is. Some of my best friends in the world are Patriots fans, and they’ll be talking trash to me. … I’m a huge Red Sox fan and a huge Celtics fan, but football’s a little different story for me.”