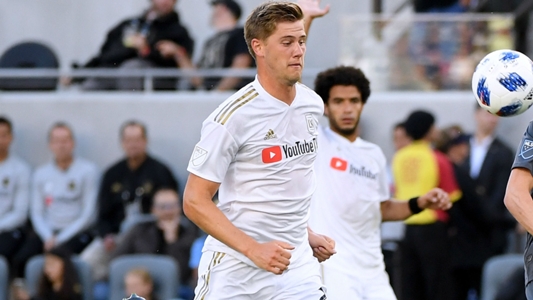 The 25-year-old was out of contract following the 2018 campaign, and will now return on a four-year deal

Los Angeles FC has announced that the club has signed defender Walker Zimmerman to a new four-year contract.

The club used targeted allocation money to sign the 25-year-old, who saw his previous deal expire at the end of the 2018 season.

“Walker has emerged as one of the top center backs in MLS, and we are incredibly pleased to agree to a new, long-term deal that will keep him in Los Angeles for the foreseeable future,” LAFC general manager John Thorrington said in a club release.

Zimmerman has played six MLS seasons, five of which were spent with FC Dallas and the sixth with LAFC in its expansion 2018 campaign.

“I could not be more excited to continue my career with LAFC and build on what the group accomplished in our first year,” Zimmerman said.

“I would like to thank the club for wanting me to be a part of the future here in Los Angeles, and I can’t wait to get started again.”

The 6-foot-3 center back has earned four caps with the U.S. national team and is currently with Gregg Berhalter’s side for its annual January camp.

The LA Galaxy, LAFC’s in-town rivals, also inked a defender to a new deal announced on Tuesday, with Rolf Feltscher signing a new contract with the club.

The 28-year old has signed on for his second season with the club as they look to rebound from a poor 2018 showing.

“We are pleased to have Rolf return to our backline,” LA Galaxy general manager Dennis te Kloese said in a team release. “He brings depth, stability, and versatility to our defense and we look forward to his contributions to the LA Galaxy in the upcoming season.”

The Venezuelan spent the majority of his career before MLS playing for various European teams in Germany, Italy and Spain.