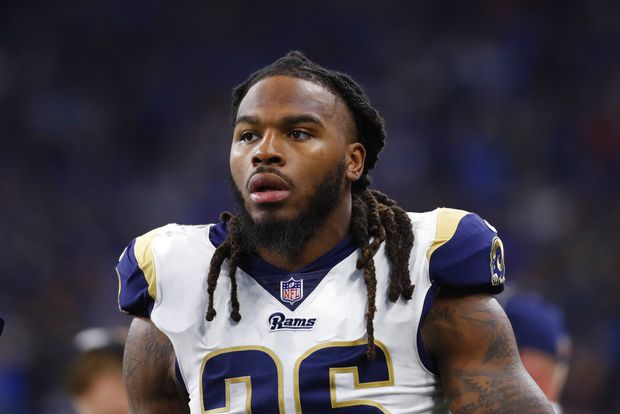 When Los Angeles Rams inside linebacker Mark Barron takes the field against the Philadelphia Eagles on Sunday night, he’ll be supporting a Birmingham-base charity.

For the Rams’ “My Cause, My Cleats” game, Barron chose to highlight Together Assisting People as well as My Brother’s Keeper.

NFL teams have designated games during Weeks 13 through 15 for players to wear cleats decorated to bring attention to charitable causes and organizations. The special cleats for players throughout the league are being auctioned online, with all the money raised going to the charities represented by the shoes.

“I’ve got two different organizations,” Barron said about his Sunday night shoes. “One of them is TAP, and other one is MBK — My Brother’s Keeper. They’re both kind of similar. They both kind of focus on inner-city kids, youth, younger kids in the inner city. I’m an inner-city kid myself, and I kind of grew up with limited opportunities and I was just fortunate enough to make it out.

“To see organizations that are reaching back trying to help those kids out and create those opportunities for them, of course I’m going to support those type organizations.”

TAP was founded by one of Barron’s former Alabama teammates, Chris Rogers.

TAP states its mission “is to provide education and career-focused mentoring programs for inner-city youth. The TAP program accepts students in grades 8-12 and helps them reach goals such as preparing for standardized testing, submitting quality college applications and securing scholarships.” The goal “is to teach the young people of today how to be leaders of tomorrow” through “activities and events that provide mentoring, educational, recreational and physical fitness related programs for youth.”

On Nov. 17, Barron teamed with TAP to give away 1,500 turkeys in Mobile and Prichard.

Barron was an All-State linebacker at St. Paul’s Episcopal in Mobile when the Saints won the AHSAA Class 5A championship team in 2007.

Another former prep star and Alabama standout is supporting TAP in the “My Cause, My Cleats” initiative on Sunday. Baltimore cornerback Marlon Humphrey from Hoover is highlighting the organization on his shoes in the Ravens’ game against the Tampa Bay Buccaneers.

The Eagles and Rams kick off at 7:20 p.m. CST Sunday at Los Angeles Memorial Coliseum. NBC will televise the game.

Already the NFC West champions for the 2018 season, the Rams will try again to wrap up a first-round bye in the conference playoffs.

Los Angeles could have done that in last week’s Sunday night game, but the Chicago Bears took a 15-6 victory to give the Rams their second loss of the season.

“Some teams, when they lose, they might go into the tank, and then it’s negativity and some of that starts to follow into the locker room,” Barron said. “That doesn’t happen here. We simply learn from our mistakes and move on.”