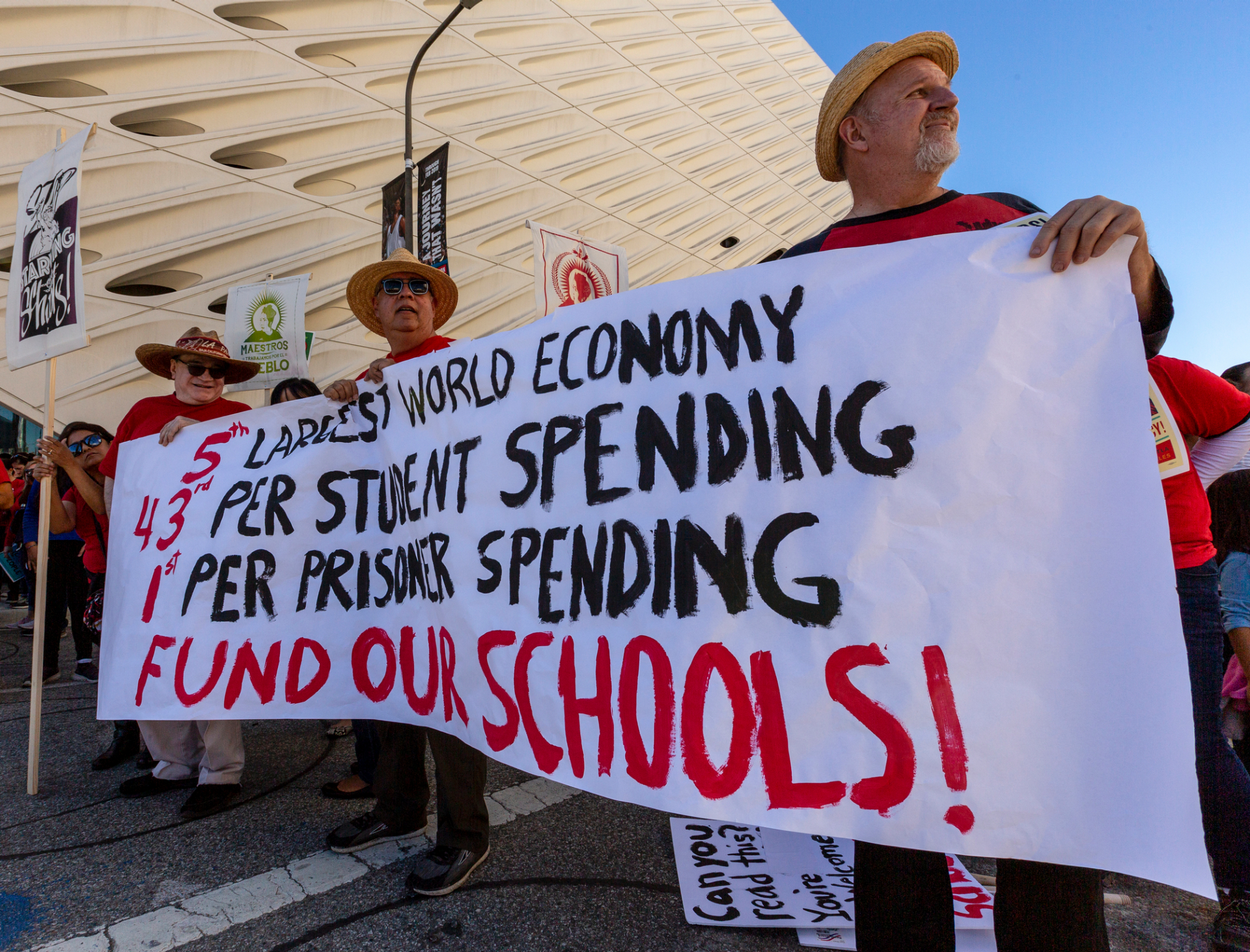 In this Saturday, Dec. 15, 2018, photo, thousands of teachers rally outside The Broad, a contemporary art museum downtown Los Angeles. Teachers in the nation’s second-largest school district will go on strike next month if there’s no settlement of its long-running contract dispute, union leaders said Wednesday, Dec. 19. The announcement by United Teachers Los Angeles threatens the first strike against the Los Angeles Unified School District in nearly 30 years and follows about 20 months of negotiations. (AP Photo/Damian Dovarganes)

LOS ANGELES – Teachers in the nation’s second-largest school district will go on strike next month if there’s no settlement of their long-running contract dispute, union leaders said Wednesday.

The announcement by United Teachers Los Angeles threatens the first strike against the Los Angeles Unified School District in nearly 30 years and follows about 20 months of negotiations.

The union, which said it would strike on Jan. 10, argues that the district is hoarding a large reserve of $1.8 billion that could be used to pay teachers more, lower class sizes, improve conditions and add more full-time nurses at campuses. The union also is arguing for “common-sense regulation on charter schools.”

“We’ve reached the point where enough is enough,” union President Alex Caputo-Pearl said at a news conference announcing the plan to strike.

“We have watched the underfunding and the actions of privatizers undermine our students and our schools for too long,” he said. “The civic institution of public education in Los Angeles is worth saving. It needs to be saved for the future of the city.”

In a news release on Tuesday, the district said “a strike would harm students, families and communities most in need.”

The district, which has more than 640,000 K-12 students, offered $30 million in additional funding to reduce class sizes and hire additional counselors, librarians and nurses, and said the union had agreed to a 6 percent salary raise.

Caputo-Pearl denied agreeing to any terms regarding salary and said the union would be filing an unfair labor practice charge against the district “on that lie.”

“By dragging us through this process for 20 months, refusing to invest in our schools, the district has disrespected our students and disrespected us,” he said. “For these reasons we have not accepted the district’s offer to go back to the table.”

The State of California Public Employment Relations Board issued a complaint against the union this week for refusing to bargain in good faith.

Much of the bad blood between the two sides centers around the district’s superintendent, Austin Beutner, an investment banker and former Los Angeles deputy mayor without experience in education.

Thousands of teachers took to the streets of downtown Los Angeles last weekend to demand a new contract. They wore red shirts, banged drums and carried signs that read “Stand With LA Teachers!” as they marched.

The teachers are tapping into a shift in public sentiment that supports better wages for educators that came with a “Red4Ed” movement that began earlier this year in West Virginia, where a strike resulted in a raise. The movement spread to Oklahoma, Kentucky, Colorado, Arizona and Washington state.