By
Jerry White and Kim Saito

More than 33,000 teachers in the Los Angeles Unified School District are set to strike Thursday in what would be the largest walkout by educators in the US since last year’s statewide strikes in West Virginia, Oklahoma and Arizona. Like the previous struggles, the battle in the nation’s second largest school district centers on the fight by educators against the assault by both the Democratic and Republican parties on the right to public education.

Teachers are demanding pay raises, smaller class sizes and increased funding to hire more nurses, librarians, counselors and other critical support staff. They are also opposing the school authorities’ use of standardized tests to scapegoat teachers for educational problems caused by the defunding of education and the deterioration of social conditions. In Los Angeles, as in other school districts, the shutting down of “failing schools” has been used as the justification for a vast expansion of for-profit charter schools, which siphon off an estimated $600 million from LA public schools each year.

While last year’s statewide strikes largely pitted educators against Republican-led state governments, in Los Angeles teachers are fighting directly against the Democratic Party, which controls the school district and the local government, holds the governor’s seat, and wields a super-majority in both houses of the state legislature. 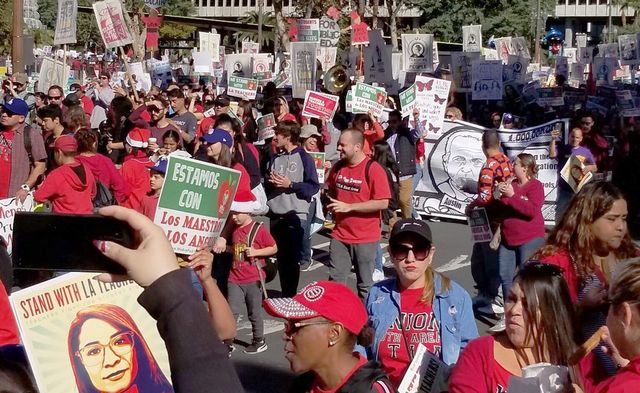 While the teachers’ unions in California and nationally have falsely promoted the Democrats as allies of teachers and defenders of public education, the Democratic Party has proven to be just as ruthless an enemy as the Republican Party. Decades of bipartisan funding cuts have reduced California schools, once known as the best in the nation, to 43rd in the US in per-pupil spending.

The state is expecting a $15 billion budget surplus, but the new governor, Democrat Gavin Newsom, has declared that any proposals for increased K-12 school funding will have to be “whittled down” because “we all” have to “live within in our means.” After a meeting with state Democrats, he told the Sacramento Bee last month, “We’re not going to deviate from being fiscally prudent”—a reference to his predecessor Jerry Brown’s austerity measures.

Yet both corporate-controlled parties have showered Silicon Valley and the entertainment and finance industries with endless tax cuts. California is home to the largest number of billionaires—144—in the nation.

The school district, headed by the multi-millionaire former investment banker Austin Beutner, has refused to budge. It is demanding that the paltry three percent raise it is offering be contingent on cutting the health care benefits of future teachers. School officials are also rejecting out-of-hand the teachers’ demands for increased school funding and hiring, and a curtailment of charter schools.

An article in Sunday’s Los Angeles Times (Beutner is the newspaper’s former publisher and CEO), complained that teachers are demanding “more control over how money is spent at schools, how much time is given over to standardized testing and how space on district campuses is allocated to charter schools.” The article continued: “District officials question whether such demands are proper bargaining topics and oppose them almost universally as interfering with their management of the school system.”

Beutner got his start in the privatization of public assets when he was tapped by the Clinton administration to head the State Department’s collaboration in the dismantling of state-owned property in the Soviet Union and its sell-off to criminal asset strippers. Backed by powerful corporate interests pushing for more for-profit charter schools, Beutner, a Democrat and former deputy mayor of Los Angeles, hopes to inflict a devastating defeat on the teachers and accelerate the privatization of public education.

In the face of this all-out assault, the United Teachers Los Angeles (UTLA), which is affiliated with both national teacher unions—the National Education Association (NEA) and the American Federation of Teachers (AFT)—has kept teachers on the job without a new contract for a year-and-a-half, including months of state mediation and fact-finding. In so doing, the union ignored a near unanimous strike mandate by rank-and-file teachers.

In a last-ditch effort to prevent a walkout, UTLA officials are meeting with school authorities on Monday. In a L os Angeles Times op-ed piece Sunday, UTLA President Alex Caputo-Pearl wrote: “We will engage in whatever talks are possible before Jan. 10 to avert a strike. But for talks to be successful, the district needs to commit to improve public schools.” This vague formula appears to invite the district to offer some cosmetic change in its position in order to block a strike.

If the UTLA is unable to prevent a strike, it plans to follow the pattern of the NEA and AFT in 2018 in West Virginia and other states where the unions worked to isolate the teachers and then cut deals with the political establishment that abandoned educators’ demands for substantial improvements in pay and school funding. The unions did everything they could to prevent the spread of strikes across the US and prevent the movement of educators from developing into a political confrontation with the Democratic Party.

Instead, they sought to channel the opposition of the teachers behind the campaign of the Democrats in the 2018 midterm elections under the banner of “Remembers in November.” The outright treachery of this policy is already becoming evident to the teachers in LA.

In his comment in the Times, Caputo-Pearl tried to boost illusions that teachers could achieve their aims by lobbying for increased funding from the Democrats in the state capital in Sacramento. The UTLA president also promoted a Democratic-backed initiative on the 2020 ballot that includes a modest increase in capital gains taxes.

The unions peddled the same illusions and lies last year in West Virginia, Oklahoma and Arizona, with the result that none of the supposed funding guarantees have been honored and no significant increase in school funding has occurred.

A court ruling by a federal judge over the weekend, which denied the district’s efforts to compel special education teachers to work during a strike, indicates that the state is looking to the union to quickly shut down a walkout before it can escalate into a broader movement of teachers and the working class more generally.

But that is exactly what is needed. If the LA teachers are to mount a serious fight, they must take the conduct of the struggle into their own hands through the formation of rank-and-file action committees in every school and community. These committees must formulate their own demands, including a 30 percent increase in wages, the reconversion of all charter schools to public schools and a vast increase in funding.

To conduct this fight, LA teachers must join their struggle with that of educators in Oakland and other school districts and fight for a statewide strike to defend the right to high quality public education. The fight of teachers must be linked to broader sections of workers as part of an assault on the fortunes of the super-rich and the fight for a radical redistribution of wealth to meet social needs.

Los Angeles educators who spoke to the WSWS Teacher Newsletter expressed their determination to fight. Lamisha, a school counselor in her fifth year with the district, said, “I travel to an elementary school one day, a middle school another day, and a high school another day, and so on. Things are getting worse because of the social crisis, and we have no support.

“Everything is on a minimum level for maximum problems. We need more counselors who can work with kids with anger management and other problems. If a child is homeless, they’re experiencing trauma. How can they learn? We need to get to the root of the problems, and no one’s tackling that one.”

“The teachers have got to speak out now,” Barbara, a special education assistant since 1999, told the WSWS. “Almost everybody I know is working two jobs to make ends meet. The three percent they’re offering the teachers is nothing. It used to be that you’d automatically get a three percent raise, like a cost-of-living raise. Then you’d get a real raise on top of that. Even people working at In ‘n Out and McDonalds are getting better raises.”

Barbara, who is member of Service Employees International Union (SEIU) Local 99, added, “Our union has thrown us under the bus. We were told that if we attended the training in June, we would get an additional five percent in pay. That never happened. Our contract was violated. I don’t understand why we can’t go out in support of the teachers. All my local said we’re going to do is wear red. That’s all.”

“I have been teaching for over 25 years and every year teachers have been mandated to do more with less,” an LA teacher posted in the comment section of a local news outlet. “The evidence is in my classroom and in the school. The school grounds are unkempt, as you can see scuff marks, trash across the campus, dirty restrooms, dusty windows, because the district has downsized custodial staff. My kindergarten students and I sweep the room and pretend to ‘ice skate’ with baby wipes while listening to music to mop the room.

“Our library is neglected because we only have a librarian every other week and the library is closed the week she is not there. There are less resources and teachers are treated like children. We have to justify why we need a learning tool or why we need certain books to meet students’ needs. Many of us either swallow the cost and buy what we need or we just make do with what we have—which is not enough.

“Sometimes I think it’s a miracle I still try to engage my students despite all the obstacles I encounter every day. I enjoy teaching my students and I value them. That’s why I think the course we’re on as a district is not sustainable. I cannot continue to subsidize my students’ education and it’s getting harder and harder for me and my colleagues to pretend that everything is okay. It’s not. That’s why I’m willing to strike—so that my students and I get the respect we deserve.”

The WSWS urges teachers and supporters to sign up for the Teacher Newsletter for frequent updates and to leave your comments or questions. To do so, click here.