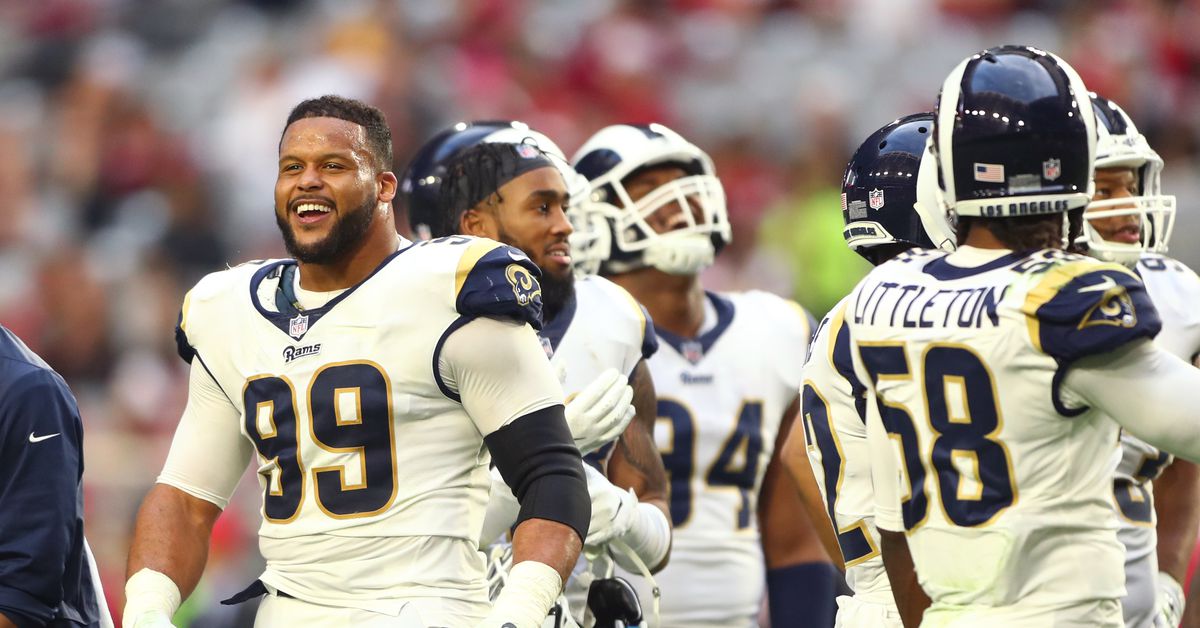 Quotes & Notes 12/27: Donald on Breaking Sack Records: “I had to toughen up a little bit to not shed those tears.” | Rams Official

A few tidbits from the Rams official site — including a detailed description of Aaron Donald’s salty salty tears. Tears of joy that will sprinkle down onto San Francisco QB Nick Mullens’ face as Donald breaks the single-season sack record.

If I was a betting man (and I am), I’d have to plunk a few down on AD’s pursuit of infamy. He had 4 bags last time out against the Niners, who have injury concerns along the OL, at RB, and at WR.

So you’re telling me he’d have 30 TDs if he was 100%? Suppose this could explain some of Gurley’s usage this season. Hopefully after a few weeks off he’ll be fresh for the dance.

Truth. Win, we get a bye week and a home game. Lose, and we’re probably playing the suddenly hot Eagles at home and then possibly traveling to Chicago.

I don’t know if it was resting our starters that bit us last year, but we certainly weren’t sharp in the first half of that playoff game against the Falcons. Similarly, we were lackluster coming off our bye week this regular season. Somehow, Sean McVay has to find a way to keep his troops honed after rest.

I actually couldn’t agree less with this take. I’d much rather see a repeat of last week offensively for the Rams, with a strong running game and Goff as game manager with bells and whistles.

No, thank YOU Aaron Donald. It’s less about the record than the Rams outrageous won/loss splits when Donald has a sack or when he doesn’t. Hopefully, he gets 3.5 more on Sunday.

With a victory, the Rams reap a huge reward (and one they’ve earned). Good to read that they’re treating this game with the proper respect.

Rams plan to use C.J. Anderson even if Todd Gurley is healthy | 247 Sports

I’m a big believer in the “CJ Anderson will win us the Super Bowl” theory. What’s that theory? Not that he’s going to somehow supplant JTG as our lead back, but that his strong showing last week in a run-heavy attack opened McVay’s eyes to how dominant his team can be with a more balanced attack. Plus, CJ looked NICE in short yardage.

No startling revelations here: Aaron Donald is good at football, Jared Goff is human and still developing, etc. Always interesting to hear it from the opposing HC’s mouth, though.

As mentioned earlier, the important of this contest is not lost on the Los Angeles Rams. That bye week is mission critical, and it would be a shocker to see them hand it to Chicago.