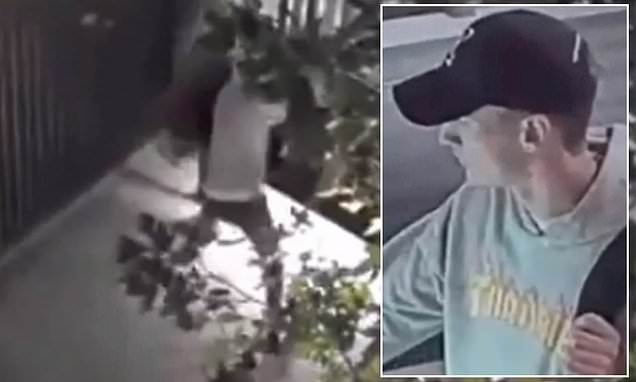 Los Angeles police release shocking video of the moment California homeless man, 58, is repeatedly stabbed to death as a $50,000 reward is offered for information leading to attacker’s arrest

A shocking video of the moment a homeless man is repeatedly stabbed and left for dead in California has been released by authorities offering a $50,000 reward for information that could lead to the attacker’s arrest.

Fernando Perez, 58, died two days after a mystery man approached him on a bench in downtown Los Angeles and stabbed him four times on November 6.

Los Angeles police released surveillance footage of the violent attack during a press conference on Wednesday as no suspect has been identified in over a month.

A shocking video shows the moment 58-year-old Fernando Perez, who is homeless, was repeatedly stabbed to death in downtown Los Angeles on November 6. Local police are offering a $50,000 reward for information that leads to the mystery attacker’s arrest

The video shows a man dressed in a light gray hooded sweatshirt walking up to Perez and plunging a knife into his body repeatedly as the victim falls to the ground.

After a fourth and final stab, the attacker then flees the scene with a black backpack.

Investigators say it remains unclear whether the backpack belonged to the Perez or the suspect, who has been seen carrying the bag in other surveillance from the area.

Paramedics arrived on the scene around 8.30pm after receiving reports of the stabbing. Perez was taken to a hospital where he died of his injuries on November 8.

The attacker then picks up a black backpack and flees the scene. It is unclear whether the backpack belonged to the suspect or Perez

The suspect was seen carrying what is believed to be the same backpack in other surveillance footage from the area after the stabbing took place. Police described him as a 6’3″ white male between 25 and 35 years old

‘During the assault, the suspect was wearing a grey hooded sweatshirt with “Thrasher” written across the chest, jogger type pants, and black shoes with white soles.

‘Several images depicted the suspect, throughout the evening, wearing a white t-shirt with an unknown type of logo on the front, a purple or light blue hat with a white logo, carrying a backpack with what appears to be a luggage tag attached.

It continued: ‘He was accompanied by a female prior to, and after the murder. She is believed to be a white female, short, small to medium build, brown hair with light brown ponytail, wearing a black long sleeve shirt, black pants with white stripes, a dark colored hat, white shoes, and carrying a black backpack.’

Authorities are offering a $50,000 reward for tips that lead to an arrest in the case.

Both before and after the murder, the suspect was seen in the area with a woman