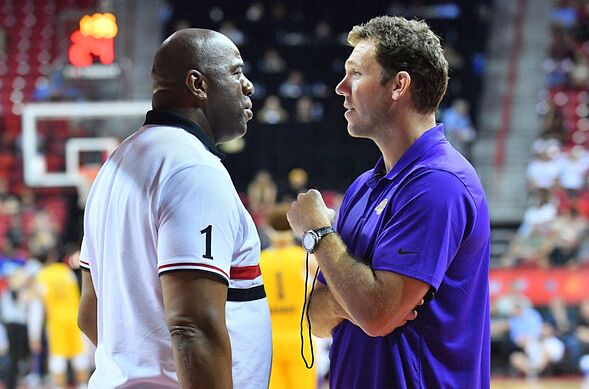 The relationship between Los Angeles Lakers head coach, Luke Walton, and president of basketball operations, Magic Johnson, is one that will be tested in the coming weeks.

It has taken me about a half a season to see that Los Angeles Lakers head coach Luke Walton is in a tough situation right now.

It’s one thing to be the Head Coach of one of the two most iconic franchises (Boston being the other) in the NBA. But to have your job turned upside down with the signing of LeBron James and have to deal with the distractions and the various dynamics that come with it, I get it. It took me a while, but I get it.

Even though I’m not the biggest fan of Luke Walton, I’ll admit it. He is really getting a raw deal and his situation right now is unfair.

Even though Luke Walton has done a good job under these circumstances and seems cool, he has to be going through it. Fans on social media call for his job after every single loss. Nothing was more evident of that fact when the Lakers lost at home to the lowly New York Knicks. Boy let me tell you about the stuff on social media after the Cleveland loss, it wasn’t pretty.

How strongly do the Lakers fans feel about a coaching change??

An article I wrote about Luke Walton’s security when the Lakers were mired in a 2-5 slump to start the season gets more buzz now than it did when I wrote it.

I think most Lakers fans forget that Walton was brought in for a different mission than what has been put in front him now. He was to develop the young players and prepare for the future because his former bosses, Jim Buss and Mitch Kupchak couldn’t get a free agent to pick up the phone much less play for this team.

Then, Magic Johnson and Rob Pelinka take over and changed the business plan for the franchise and brought in the biggest asset in professional sports to play for the Lakers. They have a plan and if you pay attention to what has happened to Walton over the last few months, you’ll realize that Walton just is not part of it.

Too many leaks and reports say otherwise.

I mean why would he have to even entertain this conversation with Sam Amick of the Athletic.

“It’s been good,” he said of the relationship with Magic. “Honestly, it has. …Anytime I call him, he calls back within an hour or two, and we talk hoops. He wants to win, and I want to win. So as far as that (goes), we’re all trying to do the same thing, and I don’t feel like he’s trying to move me out of there.

“We definitely talked about (the Oct. 30 meeting). Me and him, one on one. We one hundred percent have moved forward from it. I don’t think it has changed anything. We still – it’s still the ultimate goal, and there’s time when I’ll call him or go sit in his office and pick his brain on what he’s seeing and what kind of suggestions he might have. But there’s no – what’s the word – discomfort. I don’t walk in there, and it’s like ‘F***, I’ve got to go talk to Magic.’ Like, I have no problem going in and sitting down with him and talking about what’s going on without thinking about that at all.”

I’m not here to discredit what Luke Walton says. If this happened…it happened. But what was the man supposed to say? What job do you know where you can blast your supervisor while things are not going well at the time? LeBron James pulls a groin muscle on Christmas day, Rajon Rondo injures a finger and has surgery and SURPRISE! The Lakers are in a 3-7 hole with a murderer’s row schedule coming later on this week.

The Los Angeles Lakers currently sit in the 8th seed in the wild, wild Western Conference. The interesting thing is the precarious position they are in. The Lakers are 3.5 games behind the Oklahoma City Thunder for the third seed.

Let’s take a speculative look inside of Luke Walton head dealing with these challenges.