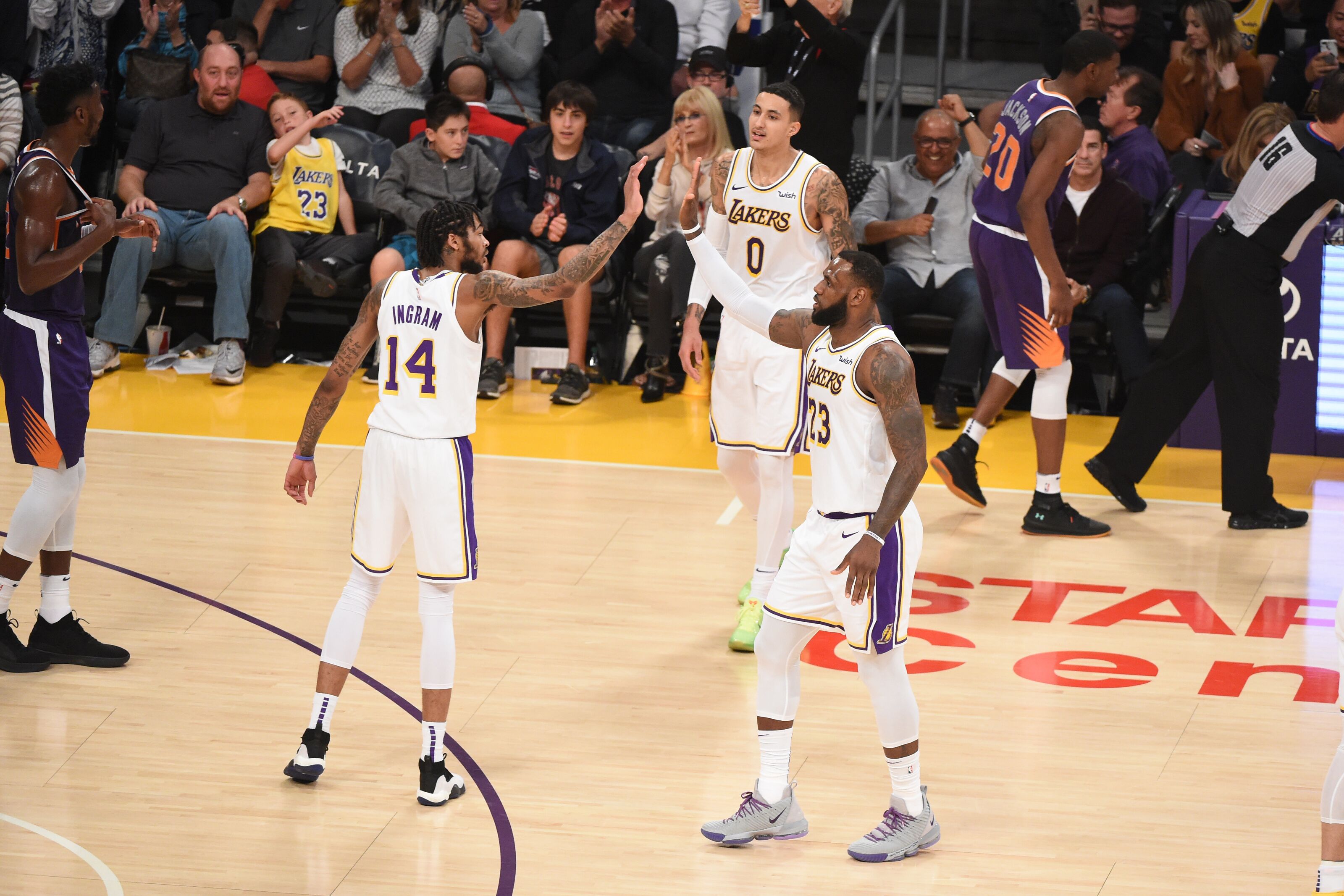 Brandon Ingram has been one of the promising young prospects on the Los Angeles Lakers the past couple years. However, does he fit on the team?

When Brandon Ingram was drafted by the Los Angeles Lakers with the second overall pick in the 2016 NBA Draft, he was being compared by many to Kevin Durant. Ingram had an elite wingspan of about 7′ 3″, and he shot 41 percent from three-point range in his one season at Duke. This made many feel like he had serious superstar potential if he simply applied himself and put in the work.

But some saw differently, as Ingram weighed a rail-thin 195 pounds at the time, despite standing 6-foot-9. They said Ingram would be a decent NBA player, but that his real potential was at the defensive end, and that offensively he’d be no better than someone like Tayshaun Prince.

Last season though, Ingram made a huge jump forward to 16.1 points per game on 47 percent shooting and an impressive 39 percent from behind the arc. He also nearly doubled his assists per game to 3.9, as he showed some real potential as a facilitator and secondary ball handler who could create for others.

The next logical step for Ingram this season was to make the jump to becoming an All-Star caliber player. As the Lakers signed LeBron James but didn’t pair him up with a second superstar (like Paul George, as was expected by many), it kinda behooved Ingram to become that second star the Lakers needed to go from being a good team to maybe a championship contender.

So far this season, it hasn’t really happened. He’s pretty much stuck at the level he was at last season, putting up 16 points per game and shooting 47.4 percent from the field. Good, but not great.

Therefore, he has become a dilemma for Lakers fans who are hungry for their team to return to the NBA’s elite. They haven’t won an NBA title in nearly nine years, and haven’t even been to the playoffs since 2013, when an extremely decimated Laker squad (this is not an exaggeration, as they were forced to start third-stringers in their backcourt due to injuries) were swept by San Antonio in the first round.

Ingram has developed into mostly a one-on-one player who needs the ball in his hands to create something for himself or others. There’s nothing wrong with that, except that on this Lakers team there’s a guy named LeBron who does just that for most of the shot clock when the Lakers don’t have anything and are forced into their half-court offense.

History has shown that LeBron does best when he is surrounded by off-the-ball players who are good three-point shooters. Ingram hasn’t developed a high ability to move without the ball and get open, and he’s struggling from downtown this season, making a paltry 31.4 percent of his three point shots.

This has led people to speculate whether Ingram can even find his niche on the Lakers over the next couple years as they attempt to take the next step towards title contention. In a recent article on Bleacher Report, Eric Pincus mentioned how the ball tends to stick with Ingram, as opposed to Kyle Kuzma, who moves well without the ball, receives a pass and either passes or shoots it within a few seconds.

Want more evidence that Ingram isn’t a great fit? Kyle Kuzma has stepped up his game lately, averaging 22.2 points and 3.6 assists per game in December on 48 percent shooting, and with Ingram out for seven games early in the month with an injured ankle, Kuzma put up 22.9 points a game and shot 52.5 percent. Since Ingram returned, however, Kuzma has struggled with his shot, scoring 21.3 points a game but shooting only 43.4 percent.

Should the Lakers start bringing Ingram off the bench so that he can handle the ball more and get more scoring opportunities by virtue of sharing the court less with LeBron or Kuzma? Should they keep him in the starting lineup and give it more time to work? Or should they ultimately trade him and use him as a sacrificial lamb to get that second superstar LeBron has always needed to win the world championship?

At first glance, Ingram’s style of play on offense doesn’t really fit with LeBron and is somewhat redundant.

However, wasn’t that also true of Dwyane Wade and Kyrie Irving? When LeBron first took his talents to South Beach, it seemed like he and Wade were getting in each other’s way, not really knowing how to mesh with each other.

But in their second season together, they figured it out, with Wade handling the ball less en route to an NBA championship.

As LeBron James gets older (he just turned 34), it will be good for him to play with another perimeter player who can not only score 20+ points per game, but can also get his own and carry the offense for short stretches to allow LeBron to expend himself less and age more gracefully.

Also, if Ingram improves his defense and three-point shooting, he can give the Lakers a big advantage at the two guard spot. In recent seasons there has been an increase in the number of players who stand between 6-foot-3 and 6-foot-9 as it has become a full-on small-ball league. Players are more interchangeable than ever as coaches embrace “positionless basketball” and switch more on defense, meaning that a shooting guard is, at least in theory, about as likely to be guarded by a 6-foot-4 guy as a 6-foot-8 guy at any given time.

Having a guy like Ingram who plays the two guard, and at times the small forward spot at at least 6-foot-9 means the Lakers have a potential matchup advantage no matter who’s guarding him, especially if he continues to gain muscle and size in his upper body. Think about how Durant seemingly always has a matchup advantage and is able to shoot over defenders thanks to his height and length, not to mention defend well and block shots.

Keep in mind that this year’s Lakers team has been fully healthy for only a small fraction of the 37 games they’ve played so far, which makes it even harder to draw concrete conclusions at this point.

Personally, I’d only trade Ingram if it were for that second superstar we all want the Lakers to acquire in the next several months.

Of course, the stubborn rumor right now is that the Lakers are aiming to trade for Anthony Davis at some point in the near future. Trading for an elite player like that will carry a hefty price tag, and you can’t pass up an opportunity to get a 25-year-old who, other than LeBron, is in the argument for being the best player in the game. Davis would make the Lakers title contenders now, and at least keep them relevant after LeBron declines or leaves the purple and gold.

Even if Ingram can and will find his niche on this Laker team, if New Orleans tells Magic Johnson and Rob Pelinka that Davis could be had for, say Ingram, Lonzo Ball, Kentavious Caldwell-Pope and one more role player or maybe a draft pick, Ingram would have to say goodbye to kale and wheat grass juice, and instead get ready for some down-home Southern Cajun cooking.