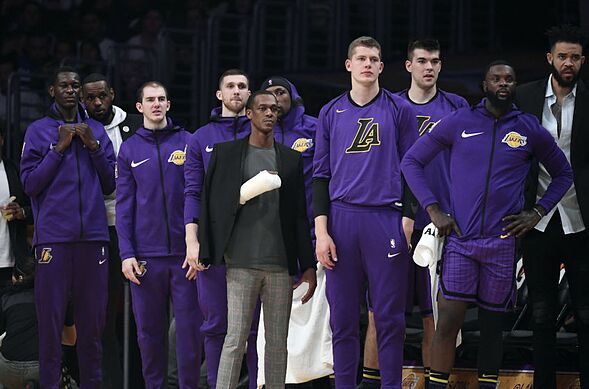 The Los Angeles Lakers need these three players to step up with injuries to LeBron James and Rajon Rondo.

When LeBron James went down with a groin injury on Christmas Day, the hearts of Los Angeles Lakers fans sunk in their chest because everyone knows how vital he is to the team’s success. However, that disappointment was instantly replaced with a pleasant surprise, when the rest of the Lakers roster went on to step up and blow out the defending champion Golden State Warriors.

Thankfully, for James and the Lakers faithful, his MRI came back clean, so he is already listed as day to day and should only miss a couple weeks at most.

His injury history has been squeaky clean up until this point in his career, and it would not be surprising to see him heal faster than the normal person or even athlete would from this muscle strain.

Unfortunately, they also got bad news along with the good they got about James early in the week. Rajon Rondo reportedly has a grade three sprain to his right ring finger on the same hand that just kept him sidelined for the past month.

Before his latest injury, Rondo was a key factor in the Lakers’ statement victory against the Warriors and has played well when healthy this year. They are used to being without him because he missed 17 games with a more severe injury to that same hand that occurred in the middle of November. With this latest injury, he is likely to miss a month because he needs surgery again.

That means some of the other Lakers, especially the young core, need to continue to play well while those two rest up and get healthy. Considering both of them are also in their thirties and on the back nine of their careers, it would be smart for the Lakers to keep them out as long as possible to preserve their long-term health and any chances at a deep postseason run.

The Lakers’ first game without them was a pretty good indicator of who they are going to look towards to take on bigger roles. They played fairly well in a thriller against the Kings and it took a late Bogdan Bogdanovic three to beat them. This was a positive sign, but it also showed their inability to close out games without James or Rondo, something that plagued them the last two seasons.

With both of these guys out, the Lakers are at risk of dropping out of the playoff seeding in the Western Conference because they only sit one game up on the ninth-seeded Memphis Grizzlies after losing to the Los Angeles Clippers.

These are the three Lakers that will need to take it to the next level to make sure that does not happen.