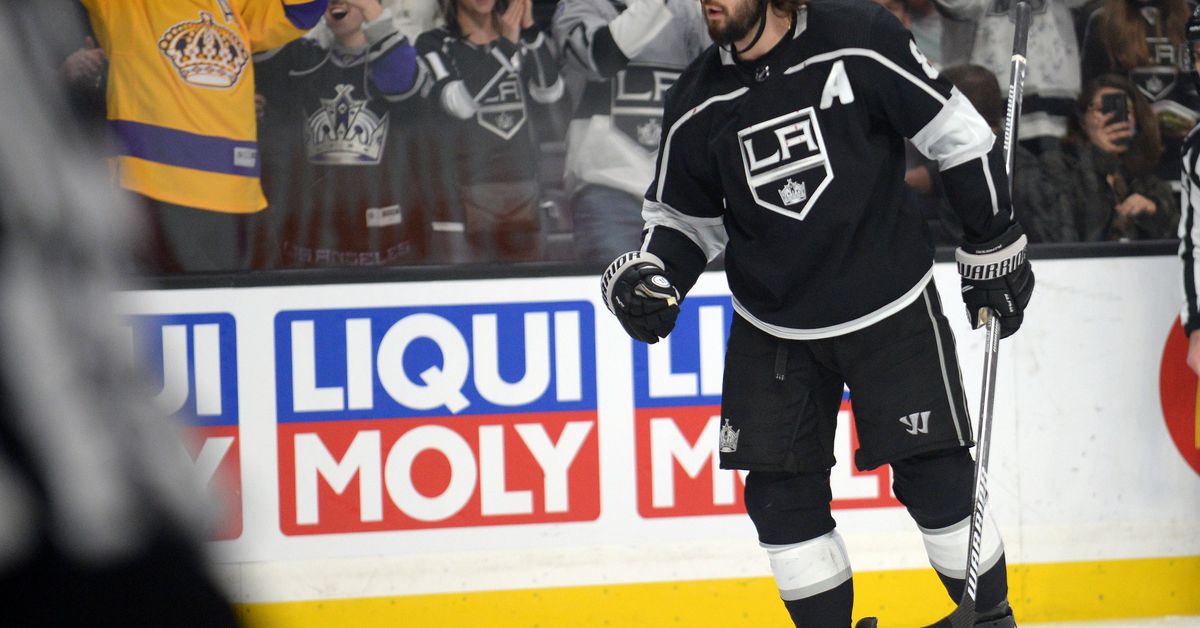 It’s the Los Angeles Kings versus the St. Louis Blues and we are live from Staples Center in the last game for the Kings until February 2nd. The Blues have been playing well as of late, winning six of their last ten (6-3-1) while the Kings probably only remember Saturday’s 7-1 disaster against Colorado.

Staples Center looks to be about three-quarters full, which is pretty good for a Monday afternoon holiday game. Regardless of how the game goes, the funniest part of the game has to be the pre-game analysis provided by Hall of Famer Nick Nickson and Daryl Evans from the press box high above the seats and coming to you in real time on the scoreboard. Nick and Daryl both wax poetic about how the chemistry is building for the top line of Ilya Kovalchuk, Anze Kopitar, and Dustin Brown and how Kovalchuk has five points in seven games and how the line is really gelling.

This is followed immediately by interim coach Willie Desjardins putting out these lines:

Oh Willie, you never cease to amaze me. Maybe this is why you’ll be the interim coach for all eternity. For more on Willie and all the Kings angst, I suggest you go to today’s Perspectives column.

In the end, the Kings rallied for a 4-3 win and are 3-1-1 in their last five games. Jonathan Quick stopped 33 shots (and again fought sometimes suspect play in front of him) to earn his 302nd NHL victory.

”It’s a cool milestone but we’re just trying to get back in the playoff race,” said Quick, who was the second-fastest American goalie to reach 300 wins.

Another double win for the Kings who now sit eight points out of a playoff spot? What does that mean? It means that the Kings need to win four more games than the six teams above them and they are in!

10:31—Mackenzie MacEachern from Vince Dunn and Ivan Barbashev. This was MacEachern’s first goal of his career and by the way he acted, you surely knew it. Take a peek:

18:49—The Kings didn’t fare well in the first period on faceoffs, losing 16 of 25. Here, they win one and promptly turn it over allow the puck to be floated ahead where Oskar Sundqvist lifts it over Quick’s shoulder. Happy Birthday, Quickie!

19:04—Tyler Toffoli on his 101st shot in 31 games (three goals) takes the perfect pass from Brendan Leipsic just 15 seconds after the Blues took all the volume out of Staples Center, Toffoli’s goal gives the Kings some much needed momentum going into the intermission.

7:15—The second period was Penaltypalooza for the Kings as they drew four penalties (including a double minor) in a 2:29 span. After getting high sticked by Robert Bortuzzo (yes, there way blood), Drew Doughty wasted no time with a laser from the point to get his comeuppance. Fun Fact: All of Doughty’s goals this year have been on the power play.

18:16—Jake Muzzin gets the play going to Brown who was feeling it as he threaded a perfect pass to Kopitar who patiently picked his spot. Easy peasy. Kopitar with a goal and an assist. Kings up by one late in the second.

6:00—After Dion Phaneuf went on a cross checking frenzy (three by my count), Ryan O’Reilly goes short side for the power play goal. I guess that answers the “Can the Kings hold a lead in the third” question on the tips of everyone’s tongue here.

9:53—No your eyes don’t deceive you…a wicked wrister from forgotten Paul LaDue gives the Kings the lead for good. Leipsic and Toffoli each pick up their second points of the game.

“…I feel we can play better, and yet we’re still not totally out of it. It’s still around. We’ve got good goaltending, and whenever you have good goaltender, then you have a chance. If we do get a few things better, I think we can play better. I still think we have more. But we have had some time where we haven’t got it going yet. We have to stay on it….”

“You know, obviously it’s a little tough not playing for a while, but after the first few shifts, you’re right back into it and you know it was a great play by Leiper. I saw the opening and he made a pass I think through a guy’s skates so it was a great play by him and it felt good to get that one. It’s great, especially to get the game winner to seal the deal there. That was unbelievable. It was a huge team win and we really needed that one so it felt pretty good.”

“Maybe not the start that we wanted, but we battled back. I mean even the first period we were down, but we generated quite a few chances, just couldn’t connect on them. But we stuck with it and at the end of the day got the job done.”