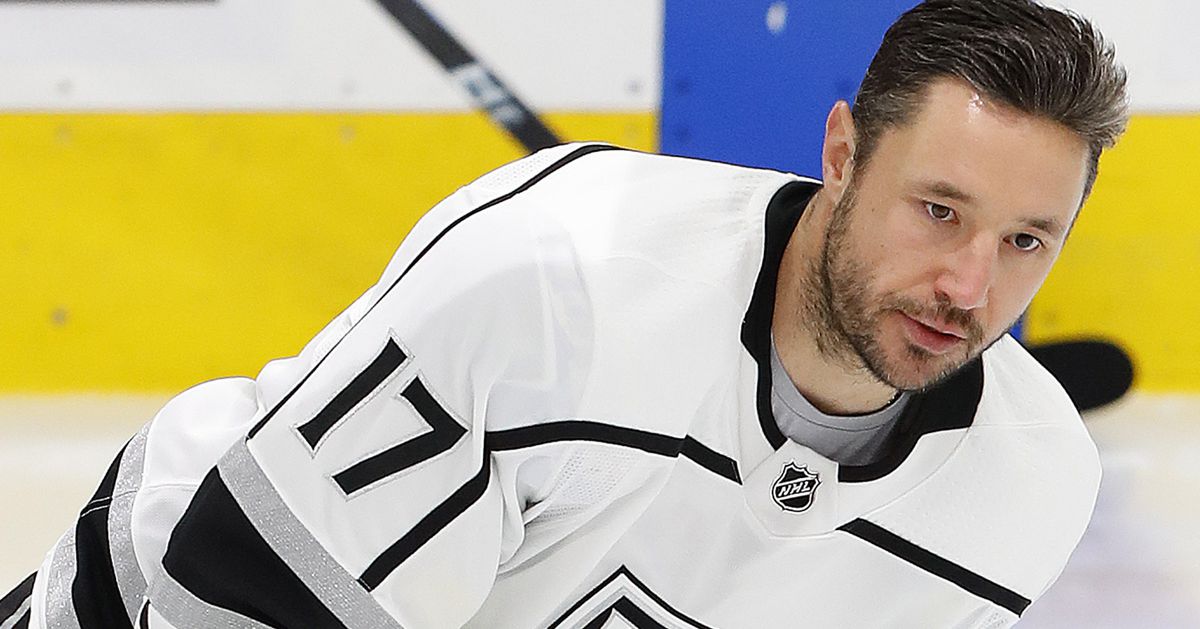 If you had to write a script for this game, having it start and end with goals from Ilya Kovalchuk would seem a little too on the nose. It’s the kind of feel-good return to the ice for a player who missed 10 games after ankle surgery, who saw his ice time dip to unprecedented lows, who saw himself demoted to the third and fourth lines and taken off of the top power play unit. A point per game player before Willie Desjardins took over behind the bench, Kovalchuk found himself trying and failing to win the trust of a new coach.

He was the consummate professional through it all, and now that he’s returned to the ice, his actions spoke even louder than words could.

Two goals, including an overtime game winner. Six shots on goal. Noticeable the whole game, despite his linemates. A force on the power play.

Even Kovalchuk’s appearance in overtime was a bit of atonement. The Kings haven’t seen many games go into overtime this season, but their very first game did, also against the Sharks. Ilya Kovalchuk saw the ice in that one and it didn’t go well, his lack of foot speed being easily exposed by the Sharks. This time around, Kovalchuk seemed more prepared for what three-on-three hockey entails in the NHL, and he used his ability to gain possession and enter the zone to his advantage.

Is Ilya Kovalchuk the fastest player? Absolutely not, especially not when he’d already been on the ice for a minute before his goal. But he still managed to carry the puck in, beat two Sharks players, and pick his spot over Martin Jones’ glove hand.

Not too bad for a player who was the subject of trade rumors due to his diminished role on the team just a handful of weeks ago.

The Kings got off to a quick start in this game, controlling most of the first period and outshooting the Sharks 15-8 in the first frame. Kovalchuk’s opening goal on the power play was the kind of snipe from the might-as-well-be-Ovechkin-spot that contributed to the Kings’ desire to sign Kovalchuk in the first place. And as good as the shot was, the fake shot from Jake Muzzin can’t be overlooked. Sharks forward Melker Karlsson absolutely bit on Muzzin’s fake, going down to a knee to block, and then being unable to cover Kovalchuk when it turned out Muzzin was going for a pass. In an underwhelming (to say the least) season for the Kings, Muzzin’s play has largely been phenomenal.

The Kings thought they extended their lead to 2-0 in the second period with a shot from Oscar Fantenberg, but what would a Kings game be without a little goalie interference controversy? On the play, Dustin Brown did what he does best, and that’s get all up in a goalie’s business. He set up a great screen in front of Martin Jones, a screen which neither Jones nor any single Sharks player tried to do much about. Jones spent enough time with Jonathan Quick; we’ll guess that he knows exactly how to push a guy in the back to try to get him out of the way — or how to sell a marginal interference call. After Fantenberg’s shot went in, Jones and the Sharks on ice didn’t protest, but Peter DeBoer challenged it. It’s easy to see why — even if the challenge failed, it would give his team a chance to regroup after going down 2-0 to the literal worst team in the league. And if you win, well, even better.

Upon review, the Situation Room agreed with DeBoer and overturned the goal. Overhead shots made it more apparent that Jones’ stick got trapped between Brown’s legs, but even still, this is an iffy call at best, and we’ve seen lots of iffy interference calls go against the Kings. As broadcaster Alex Faust put it, this seems like the kind of goal that should have been allowed under the league’s suggestion to not over-legislate and instead to use goaltender interference challenges to catch egregious cases of interference that were missed.

See below for Toronto’s e-mail. My opinion: this goes against the spirit of an offseason memo that the Situation Room would let calls on the ice stand unless something egregious was missed. pic.twitter.com/f4MyXXmFK4

But, of course, none of us write or interpret the rules. 1-0 Kings, after two periods.

Early in the second period, Alex Iafallo got the Kings on the board again, for real this time, off of a pass from Dustin Brown behind the goal line. No way this one could be argued by the opposing team. Iafallo doesn’t usually score on one-timers from the circle, but he was placed perfectly to pick up that shot and, once again, target Jones’ glove side.

The Sharks got on the board around five minutes later, with 28-year old Czech rookie Lukas Radil scoring his third of the season. Radil, who has spent the past three seasons in the KHL, made a savvy play to head to the net, where he deflected in a shot from Timo Meier. Kings rookie defenseman Sean Walker found himself fooled on that play by Radil; a learning moment for sure for Walker as he adjusts to this level of pro hockey.

Radil (52) feints inside, Walker (61) looks there, seems to assume that’s where Radil is going. That’s when Radil pops outside, gets open. Crafty from Czech vet & likely reason why Walker was slow to tie him up.

With less than two minutes remaining, the Sharks pulled Jones. The Kings had several chances at the Sharks’ empty net but missed, which of course could mean only one thing: game-tying goal with 30 seconds left. No one else but Joe Pavelski with a tip-in.

The rest of the story, you already know. Ilya Kovalchuk, two goals, two points for the Kings. Both goalies came up huge for their teams tonight, with Jones having one of his better outing for the Sharks this season, and Quick standing on his head at times as the tide of the game turned to the Sharks.

It was the kind of classic Jonathan Quick performance that the team needed, especially as the Sharks began to swarm (pun very much intended) when the Kings couldn’t keep up with them.

We await word on the condition of Austin Wagner, who left the game after absorbing a hit by Erik Karlsson. Opinions abound on whether the hit should be punished — the NBCSN intermission broadcast was adamant that Karlsson would be suspended, but in a season where we’ve seen worse hits go unpunished, and when some say the league is trying to let players play the game more physically, it’s debatable whether Karlsson will sit for this one.

The Player Safety department did announce that Karlsson will have a hearing tomorrow; presuming that this is a phone hearing, that would mean a fine or a suspension under five games.

San Jose’s Erik Karlsson will have a hearing tomorrow for an illegal check to the head on Los Angeles’ Austin Wagner.

The Kings head to Las Vegas to take on the Vegas Golden Knights tomorrow. If Wagner can’t play, Nikita Scherbak would most likely be the one to draw back in. Cal Petersen is expected to get the start.