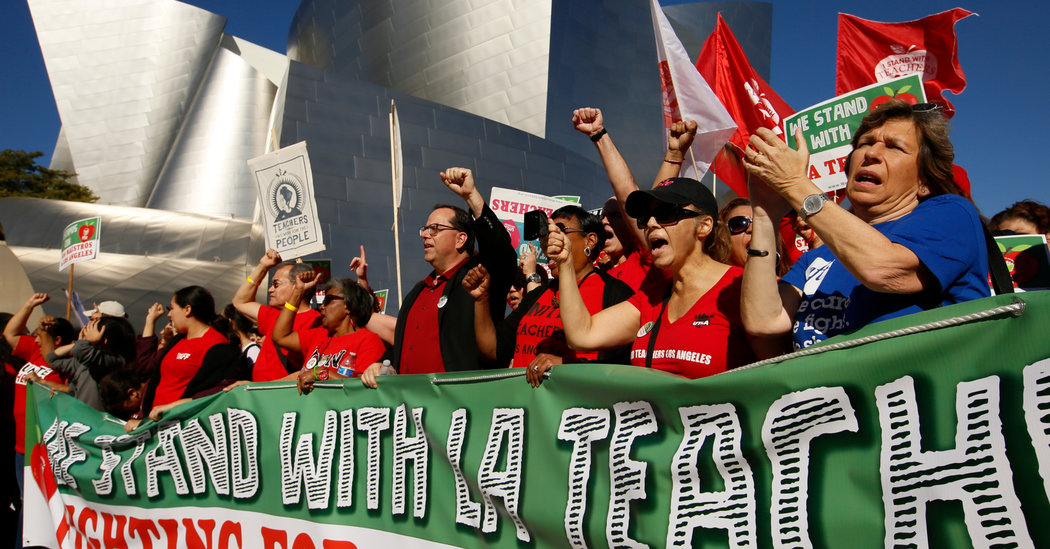 LOS ANGELES — There are 900 schools, 30,000 teachers and more than 600,000 students in the Los Angeles public school system. By the end of the week, a teacher strike could throw them all into crisis.

After months of failed negotiations, teachers are expected to walk off the job on Thursday, in a show of frustration over what they say are untenable conditions in the second-largest school system in the country.

Teachers and other employees in the Los Angeles Unified School District are demanding higher pay, smaller class sizes and more support staff like counselors and librarians. But district officials say that they do not have the money to meet all of the demands and that the strike would do more damage to schools than good.

A strike in Los Angeles would offer a new stage for the national teacher protest movement, which in the last year has driven walkouts against stagnant pay and low education funding in six states. A walkout in staunchly liberal Los Angeles would also signal a major shift in a movement that has spread mostly in conservative or swing states with weaker unions.

Teachers in those states thronged state capitals to picket legislators and governors last year. Educators in Los Angeles, by contrast, are led by a strong union and are planning a more conventional strike against the superintendent and Board of Education, who they say favor charter schools over traditional ones. Their protests could ripple across the state, with frustrated teachers in other cities considering their own labor actions.

Although officials from the teachers’ union and the school district have another negotiating meeting set for Monday, analysts say a last-minute agreement seems unlikely.

The impending strike highlights the fact that despite California’s reputation as a center of liberal policy, it spends relatively little on public education. School spending levels, about $11,000 per student in 2016, are far below those in other blue bastions; for example, California spends about half as much as New York on the average child.

Education advocates on all sides of the labor impasse in Los Angeles say that it is the neediest students who are hurt most by funding constraints. More than a fifth of public school students in California are still learning English, the highest percentage in the country.

“California has been underfunding its schools for many, many years,” said Pedro Noguera, a professor of education at the University of California, Los Angeles, who has worked closely with Los Angeles and New York public schools.

The state has only recently begun to restore deep cuts made during the last recession, when California was hit particularly hard. “It’s not even close to where we should be,” Professor Noguera said. “I would not say that the state has deliberately starved the schools, but there has been no leadership from the state.”

Underlying the debate between the two sides is a situation they agree is a major problem: that high-needs school districts like Los Angeles, where 82 percent of students are low-income, bear the brunt of the burden from the state’s low education spending.

With many wealthy and white families opting to choose charter or private schools, or move to other surrounding school districts, the Los Angeles school district is disproportionately African-American and Latino. A study from U.C.L.A.’s Civil Rights Project found that Latino students in Los Angeles are more segregated than anywhere else in the country.

In other districts in California — Oakland, in particular — as well as in Virginia and Indiana, teachers angry over pay and limited resources have raised the possibility of protests.

“We’ve had a systemic process over the past many years of disinvesting in neighborhood public schools,” said Alex Caputo-Pearl, the president of United Teachers Los Angeles, the main union for the district. Instead of funding neighborhood schools, cities and states had chosen to “dismantle them and privatize them,” he said.

Critics of the Los Angeles union say that by targeting the school district and not the state, the union is misdirecting its ire.

“Ninety percent of our funding comes from Sacramento, and if they were marching there, I would be marching with teachers,” said Nick Melvoin, vice president of the Los Angeles Board of Education.

Mr. Melvoin is a major supporter of the city’s charter schools, but concedes that some of the union’s complaints are valid. When traditional schools lose students to charter schools, which are publicly funded but privately run, they are sometimes left with students who have more demanding needs. Some may be homeless or live in foster care, or have parents who are less involved in their educations.

“I think that’s fair,” he said of the critique. The solution for traditional schools, he argued, was not to vilify the charter sector, but to adopt some of the strategies of charters to compete with them. Policymakers should better regulate charter schools to make sure they do not “cherry pick” the easiest-to-teach students, he added.

The vast majority of charter-school teachers are not unionized (although hundreds of them in Chicago last month staged the nation’s first strike against a charter network). All charter schools in Los Angeles are expected to stay open during the strike.

Just before school began last fall, public schoolteachers in Los Angeles voted overwhelmingly in favor of a strike. For months public officials hoped for an agreement, especially after the district offered a 6 percent raise. Teachers in the statewide walkouts last year were largely successful in securing raises, though results were mixed on demands for more school funding and resources.

The Los Angeles union has insisted that it wants more than a raise. Some classes have as many as 45 students, the union complained, and school nurses, art and music teachers must serve thousands of students by traveling to multiple schools.

The union has accused the district of withholding nearly $2 billion in reserve money, but the district has repeatedly said that it is operating at a deficit. Austin Beutner, the district superintendent, says that meeting the union’s demands would immediately bankrupt the district and that the district is already in danger of insolvency.

“We all say we want what’s better for students,” Mr. Beutner said. “We all want lower class sizes and more nurses. There’s no issue between what they want and what we want.”

The union has fought bitterly with Mr. Beutner, a former investment banker who was selected to lead the district last year. “We need to be working ourselves out of a hole,” he added. “I have yet to understand how a strike is going to get us there.”

Because the state allocates money to schools based on daily attendance, the strike could cost the district millions of dollars in lost funding if students stay home while teachers are on strike. The last teacher strike in Los Angeles was in 1989, when schools closed for nine days. At the time, some teachers crossed the picket lines, but there is little sign that any will do so this time. Unlike other states, public employee strikes are legal in California, where unions hold considerable sway.

Many observers say the state’s property tax law is the major culprit for chronic funding shortages in large urban school districts. In 1978, California voters passed Proposition 13, which capped property taxes and drastically limited what the state could bring in for public schools. The law means that smaller affluent suburban communities can raise money for their schools with local bonds or parcel taxes much more easily than poorer urban districts, including Los Angeles.

Both union and district leaders in Los Angeles support an effort to place a measure on the 2020 ballot that would amend the law to allow increased taxes on commercial, but not residential, property.

Many education advocates are placing their hope in Gavin Newsom, the former mayor of San Francisco who will be inaugurated as California’s governor on Monday. But Mr. Newsom has made it clear that he already plans to spend billions in early childhood education and community college, so it is unclear how much new funding he will allocate to K-12 schools.

In the meantime, teachers like Amy Owen are preparing to greet students on Monday after three weeks of winter vacation and then strike three days later. Ms. Owen, who has been teaching in Los Angeles public schools for more than a decade, said it has grown increasingly difficult to live near her school in central Los Angeles on her salary of about $72,000.

“Pretty much everyone at my age owns things, a home or a condo or something, and for me to get that I’d have to commute an hour and a half every day,” said Ms. Owen, 44. “If you looked at my salary just as a number I would be doing well in many places. But in L.A. I am just barely middle class. I understand that teaching is not a profession where you are going to make a lot of money, but we deserve some basic respect.”