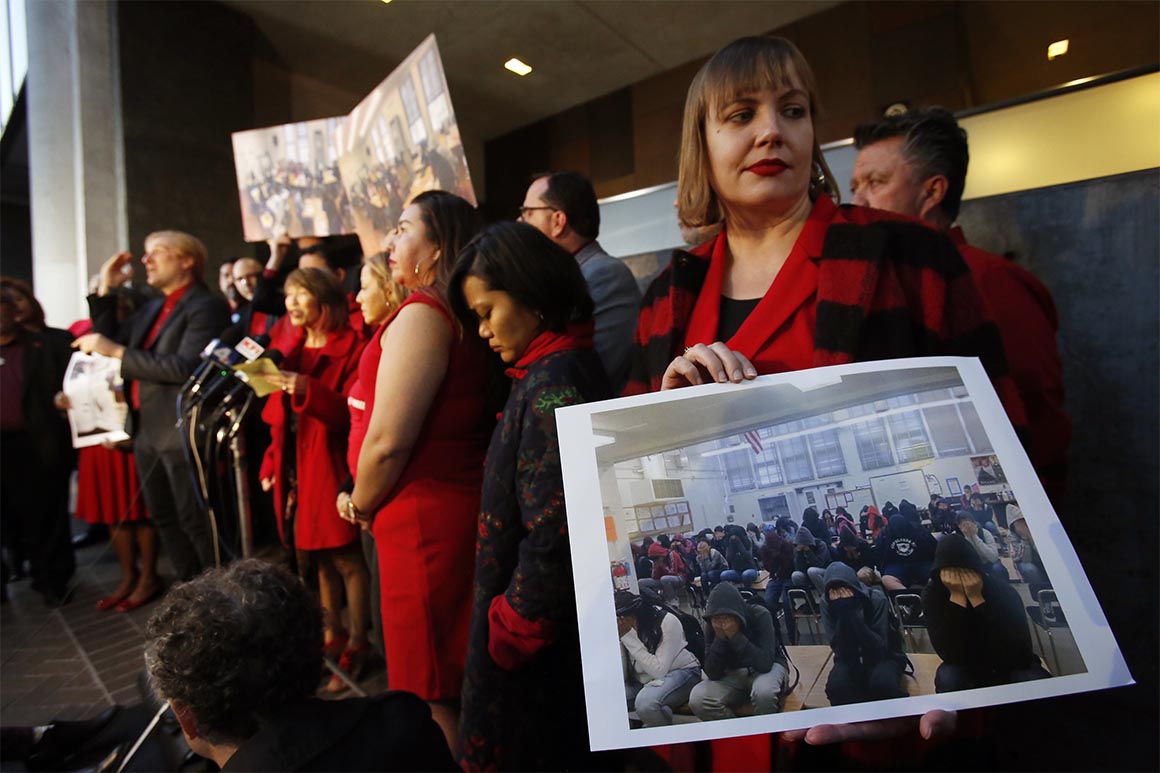 Thousands of Los Angeles teachers plan to strike Monday — raising the possibility of a new wave of “educator spring” activity resurrected in the blue state of California.

The labor unrest in LA is reminiscent of statewide teacher walkouts last year in the red states of West Virginia, Kentucky, Oklahoma and Arizona that had teachers standing up to their state legislatures and governors — even though the battle in Los Angeles features a more traditional labor fight that pits the United Teachers Los Angeles union against district leaders.

The fight is being watched closely in California and elsewhere to see if it is a harbinger of similar teacher labor action in the rest of the state or the nation and whether it could help prod California lawmakers to dedicate more funds for K-12 schools. Newly inaugurated Gov. Gavin Newsom told reporters earlier this month that the magnitude of the issues in LA was “profound” — particularly given the size of the Los Angeles Unified School District — and that “the stresses that our teachers are facing are real.”

“There are pension pressures on our school districts, there are fixed costs on health care that are real,” Newsom said. “Even with the increase in per-pupil spending it’s just simply not enough to reduce these class sizes, and we’re going to have to do more.”

As in most other states where strikes have arisen, California has struggled to bring per-pupil spending back to pre-Great Recession levels, according to an analysis from the left-leaning Center on Budget and Policy Priorities.

A daily dose of education policy news — weekday mornings, in your inbox.

By signing up you agree to receive email newsletters or alerts from POLITICO. You can unsubscribe at any time.

Former Obama administration Education Secretary Arne Duncan has weighed in on behalf of the district. And Sen. Bernie Sanders (I-Vt.) is siding with teachers.

A teacher walkout in Los Angeles — home to the nation’s second-largest school district — would be the city’s first since 1989, and sure to disrupt a city where 80 percent of school kids qualify for free or reduced lunch.

Joseph Zeccola, a high school English teacher at a Los Angeles magnet school, said even though going on strike is a scary prospect, he’s ready. He said watching other teachers walk off the job last year across the country helped give him “hope and confidence because the public is so behind teachers.”

Los Angeles Superintendent Austin Beutner said he agrees with the union about the need for more school staff, but said district leaders have a fiscal responsibility to keep the district solvent. Nearly all of the district’s funding comes from the state, he said.

Beutner said a new budget proposal from Newsom, if approved by the state legislature, would improve the district’s proposal to teachers. The district is ready to hire an additional 200 educators beyond the nearly 1,000 proposed earlier last week to bring down class sizes, as well as hire more nurses, librarians and counselors.

On Friday, he asked Newsom to get involved in the dispute.

If the strike goes forward, however, the district has hired substitute teachers and has pledged to keep all of its 1,322 schools open for its more than 694,000 students. UTLA has more than 30,000 members. The city is preparing, too.

Beutner said the district has made offers, but the union’s proposal has remained unchanged since 2017. The district maintains that its current financial situation is “not sustainable,” and unless something changes, it will be insolvent by 2021, when it will have depleted a $1.8 billion reserve.

The union, in turn, accuses district leaders of being disingenuous about the district’s finances. Randi Weingarten, the president of the American Federation of Teachers, accused Beutner of acting “like a boss and not an educator of half a million kids.”

While salary is an issue in Los Angeles, the two sides aren’t too far apart on teacher pay. The district has offered a 6 percent raise, while the union wants 6.5 percent — although the two sides disagree over when the raise should kick in.

Beyond compensation, the teachers demand more full-time nurses, librarians and counselors, and funds to address large class sizes — even though the district argues that just 6 percent of schools have 40 or more students in a classroom.

“It is dire in that things have been getting worse for a long time and nothing is getting better, and especially for our most at-risk students,” Zeccola said. “We’re giving them ridiculously high class sizes that makes it impossible for them to rise up and have the lives they deserve.”

They are also upset by what they perceive as pro-charter-school policies by the district. Charter schools, which are publicly run but managed separately of other district schools, have created a rift among Democrats for years.

Already, in Oakland, Calif., the Oakland Education Association teachers union has said a possible strike is looming there as well and teachers there rallied Saturday in support of their LA counterparts. In Virginia, a group called the Virginia Educators United has announced a march on Jan. 28 on the Capitol in Richmond. Denver teachers are poised to strike the same day.

Weingarten said it’s premature to say whether there will be a teacher strike wave this year, but there is a willingness on educators’ part “not to put up with despair or with conditions that don’t work for children.”

“Districts around the state have taken the position and have started to advocate for increasing funding,” said state Sen. Richard Roth, a Riverside Democrat. With Newsom inheriting a substantial budget surplus, “there will be a great deal of pressure to channel a lot of that toward schools.”

Jeremy B. White contributed to this report.

This article tagged under:

Missing out on the latest scoops? Sign up for POLITICO Playbook and get the latest news, every morning — in your inbox.