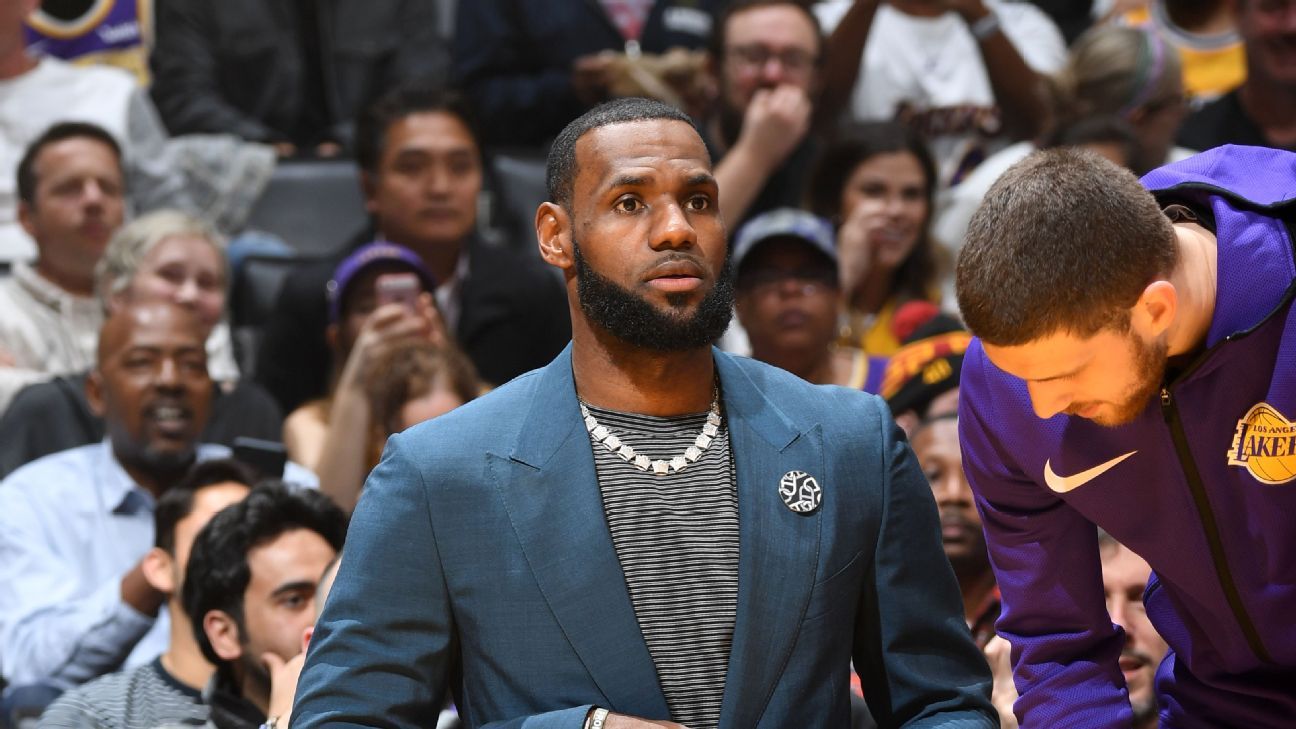 ‘ second stint in Cleveland — the four NBA Finals appearances, the first championship in franchise history that snapped a 52-year title-less drought for the city — was an unabashed success.

But it came at a cost.

While James was brilliant in those postseason runs, he played 81 games in the playoffs — an entire extra regular season’s worth — in the past four years. When James left for Los Angeles,

there were people within theCleveland Cavaliers

‘ organization who privately joked that “the tread is off his tires.”

And on Sunday, before his former team beat Los Angeles

at Staples Center in a game against the LeBron-less

, a member of the Cavaliers told ESPN he thought last season “took a lot out of” the now 34-year-old James.

It stands to reason that James’ mileage was the motivating factor behind Lakers president Magic Johnson telling SiriusXM NBA Radio back in November, “We are trying to make sure that we watch his minutes but also that we don’t run everything through him because now it is Cleveland all over again.”

In one sense, Johnson already has assured that James’ time in L.A. will be nothing like it was with the Cavs. The Lakers constructed their roster around the four-time MVP in 2018 much differently than the Cavs who surrounded him in 2014. That Cleveland team was built on a star system — James, flanked by

— and then filled out with 3-point specialists who could feast off James’ ability to create.

These Lakers have James surrounded by a handful of hopeful stars —

— and a supporting cast full of players who can theoretically play both ways while also providing some playmaking.

Johnson continued his interview by saying, “We want to get up and down.”

And to his credit, the past couple of months have proved Johnson to be right on those two points. James’ 34.6 minutes per game are indeed a career low for him in this his 16th season. And the Lakers are playing the brand of basketball Johnson wanted to see: They rank third in the league in pace at 104 possessions per game.

Here’s the thing, though. There’s one undeniable way in which the Lakers are eerily identical to those recent Cavs teams: They stink without James.

In James’ last four seasons in Cleveland, the Cavs went 4-23 in games in which he missed because of rest or injury. And that number probably would have been worse had James not played every single one of Cleveland’s 82 games in 2017-18.

And this season, through 10 games without James since he strained his left groin on Christmas Day, the Lakers are just 3-7.

There have been some rough moments since James went out, but Sunday felt like a new low.

, as the Lakers did in their first game sans James. It’s even one thing to dig a 17-point first-quarter hole at home against the

— a team that came in riding a nine-game losing streak — if you learn about respecting every opponent out of it.

But to lose to a Cavaliers team that came into the night with an 8-35 record and on a 12-game losing streak? To score only 95 points against a squad that hasn’t held a foe to less than 110 since playing at the

“I believe in this group, and I believe that this group will play better and we’ll start winning games,” Lakers coach Luke Walton said after Sunday’s defeat dropped the Lakers to 23-21, tied with the

for eighth place in the Western Conference.

The fact that Walton needed to say something like that was telling, seeing as this group beat the

on Golden State’s home floor less than three weeks ago in a game in which it didn’t have James for most of the second half.

The Lakers are figuring out just how difficult life without James can be, just like the Cavs knew so well the past several years and continue to be cognizant of this season as they tank toward the lottery.

But here’s the biggest difference, perhaps, in what those Cavs teams experienced and where the Lakers are now: James has the wear and tear of all those seasons pushing and prodding and carrying the Cavs under his belt.

When James returns, what if he can’t carry this Lakers group — in a tougher Western Conference and comprised of potential stars alongside him rather than bona fide ones — the way he used to?

You see, Johnson didn’t want L.A. to be Cleveland all over again because the plan was to have James’ teammates lift him up just as much as he lifts them up. So far, that has been anything but the case.